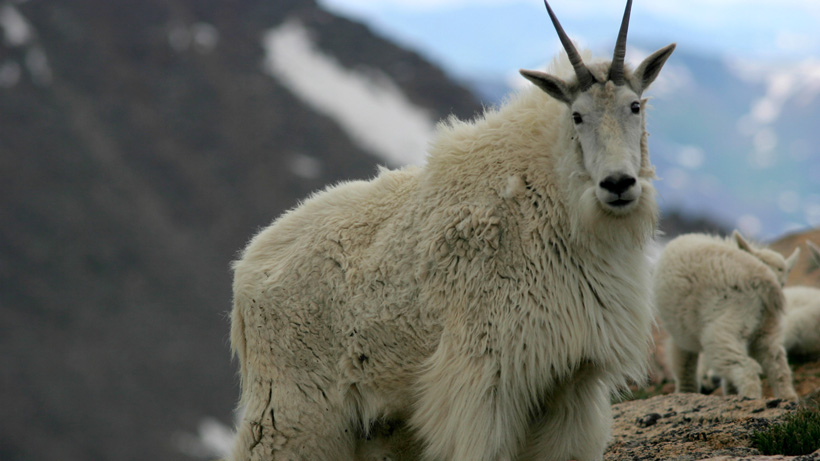 There’s a mysterious disease outbreak occurring in mountain goats along the summit of Mount Evans in Colorado that has one common symptom: diarrhea. With similar outbreaks occurring between 2014 and 2018 (and, again in 2019) – and the “loss of an almost entire age class of kids between 2013 and 2014” – Colorado Parks and Wildlife biologist Lance Carpenter and wildlife pathologist Karen Fox have begun a study to determine why this is happening.

“Last October, we found seven kids with diarrhea and we removed one of those kids and took them to our health lab in Fort Collins for necropsy,” said Carpenter.

“Through necropsy examinations, we have found a mix of bacteria and parasites, none of which single-handedly explain the severe losses in the herd,” said Fox. “We are hoping to identify what specific pathogens, and what combinations of pathogens, are present before, during and after an outbreak of diarrhea.”

Diarrhea causes dehydration and other issues that often results in death, especially within mountain goat kids.

According to the agency, Carpenter has sent fecal samples collected on July 23 to CPW’s health lab for testing in order to identify “roles of various pathogens.” The study is labor intensive as samples must be collected five to six days each week from nannies and kids – whether or not they have diarrhea.

“The whole idea is to try to figure out what is going on, be able to treat it and get that recruitment back up,” Carpenter said. “Hopefully, after October we’ll have enough data and samples to determine what is causing this. If we don’t, we’ll continue next year.”

While there was a 2015 mountain goat study that looked at habitat use, because it included the GPS-collaring of 20 nannies, biologists could have used their location information “to see if anything changed land-use wise that may have caused this diarrhea in the kids,” according to the agency. Yet, because so few of the kids exhibited any signs of diarrhea, that data won’t be used for this particular study.

During this study, Fox and Carpenter will look at how certain types of bacteria like E. coli could be behind the sick mountain goats. Certain strains of the bacteria have proven harmful if there are high levels of exposure.

“We can also take a closer look at certain types of bacteria such as E. coli, to determine if specific strains may be associated with diarrhea,” Fox said. “Hopefully, the results from this project will help us interpret the relative importance of each organism, giving us targets for treatment or management of the disease. However, if the results indicate that the pathogens we are finding are not associated with diarrhea, we can use the samples to look for uncommon or previously unrecognized pathogens.”

To keep tabs on the animals being sampled, Carpenter is marking each one. Those without a GPS-collar are marked with a paintball. They plan on collecting the scat samples as they track the animals.

“As it starts to switch to diarrhea, hopefully we’ll be able to analyze and isolate what is actually causing this disease outbreak,” said Carpenter.

They hope to stop the spread of whatever is causing the disease before it infiltrates other mountain goats within the state.

“We’ve seen a couple goats that have the same symptoms as our goats here on Mount Evans in (data analysis unit) G-4, over in G-15, which is west of Guanella Pass,” said Carpenter. “It seems like it started here and is kind of moving westward.”

The worry is that the disease could spread to bighorn sheep if not contained.