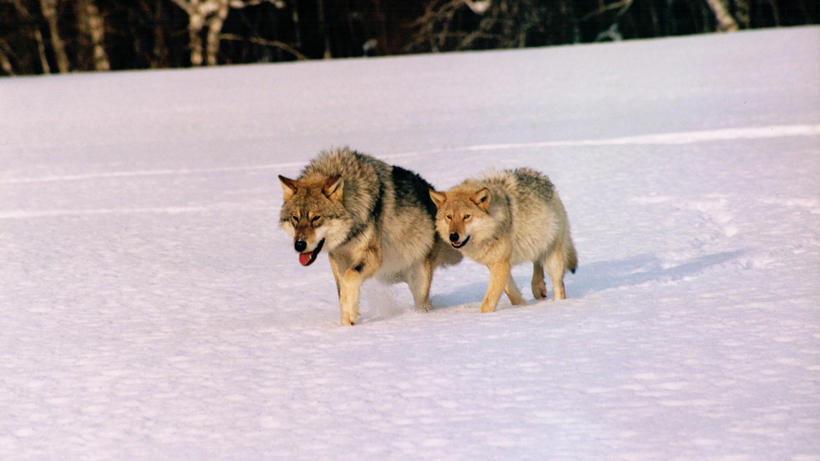 A Colorado wolf previously thought to be male is actually female. M1084 is now F1084 following a recent analysis. Originally from Wyoming’s Snake River pack, the black wolf, which was captured and collared in January 2017, has been living in Jackson County, Colorado since 2019 and has a potential mate, according to a press release.

In February, Colorado Parks and Wildlife (CPW) biologists captured and collared another wolf – this time, a gray one that was seen traveling with the rechristened F1084. Since then, CPW has kept tabs on the “travel patterns and other behaviors of this pair” and, according to CPW Terrestrial Section Manager Brian Dreher, their behavior has been “consistent with potential denning behavior.”

“While we had conclusive proof that M2101 was a male,” said Dreher, “the change in behavior was enough to drive a deeper discussion about F1084 with our partners at Wyoming Game and Fish and Grand Teton National Park.”

Using genetic information on file for the collared wolf, biologists figured out that F1084 had been mislabeled and was not a male wolf, but a female.

“The news of potential denning behavior of wolves in Jackson County is a real credit to Colorado Parks and Wildlife’s on the ground scientists,” said Governor Jared Polis. “We know wolves are resilient, hardy animals and in this case two of them hundreds of miles from their home packs found each other and are now making a home in Colorado. While these wolves have a head start, I look forward to our state moving ahead with a well-planned and inclusive process to restore gray wolves in Colorado, fulfilling the will of the voters.”

“Confirmation that we have a male and female pair of gray wolves and observing what may be denning behavior in the state is an interesting development as we begin our planning and implementation process for reintroducing gray wolves to the state,” said CPW Director Dan Prenzlow. “We have not yet determined if reproduction has occurred. As we begin the discovery process with our Technical Working Group, we can now also observe how a naturally migrating pair is adapting here in Colorado and use that information to help inform plans moving forward.”

Will there be wolf pups this spring? CPW will continue to monitor the pair via their GPS collars, trail cameras and other sightings. Stay tuned to goHUNT for further information.