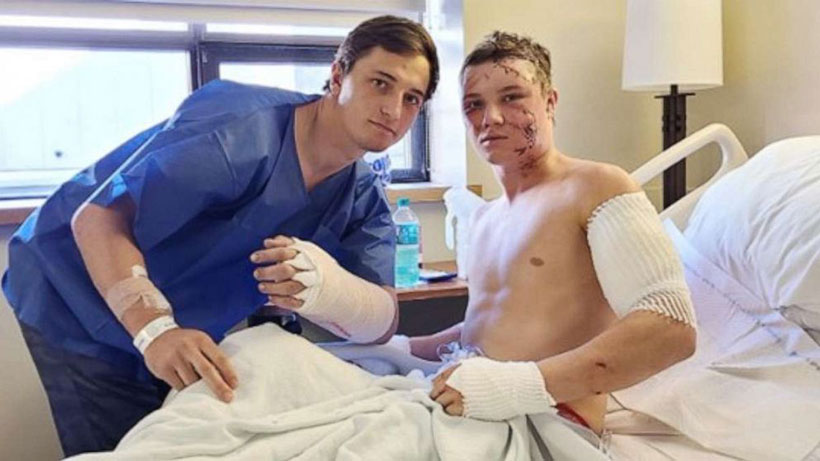 Four college wrestlers came to their own rescue after a grizzly bear attacked them over the weekend. Brayden Lowry, Kendell Cummings, August Harrison and Orrin Jackson – all students and wrestling teammates at Northwest College in Powell, Wyoming – were out shed hunting in Shoshone National Forest when they came upon the grizzly, according to ABC News.

Lowry and Cummings noticed it first and Lowry was the first to be attacked.

“The bear came running out of the trees. I didn't even see it until it was right in front of me, but I heard the crashing,” said Lowry. “The only thing I could yell is: 'Bear! Bear!' I just knew I had to protect my head and just kind of fight for life, you know -- it's life or death.”

Cummings came to Lowry’s aid, yelling at the bear before “grabbing and punching” the animal.

“It knocked me onto the ground and then, with its head, pushed me on the ground all the way up against the trees and then kind of pinned me up there and it was attacking me,” said Cummings. “I was putting my hands in its mouth and stuff, so it wouldn't be chewing on my neck and everything.”

While the bear initially retreated, it did return.

“I heard the bear kind of grunting behind me and I heard it walking,” said Cummings. “Then I saw it again and it came and attacked me again.”

Fortunately, the duo was able to escape and return to their group, who quickly called 911.

“I spoke with a lady on the phone -- the dispatch lady -- and we kind of coordinated a plan to get the Flight for Life there,” said Jackson. “I remember telling her: ‘That's our brother up there.’”

Cummings was airlifted to Billings Clinic in Cody where he received 60 staples in his head and Lowry was treated for a compound fracture in his left arm, according to ABC News.

“For us to walk out of there alive, all four of us, it's a miracle. It really is,” said Lowry.

The attack is currently under investigation by the Wyoming Game and Fish Department (WGFD); however, WGFD has stated that the attack seems to be “a sudden, surprise encounter.” Regardless, the agency cautions anyone recreating in the South Fork and North Fork of the Shoshone River, Clarks Fork River and Greybull River drainages to stay vigilant due to the increase in bear activity in these areas.

GOHUNT wishes them a speedy and full recovery.