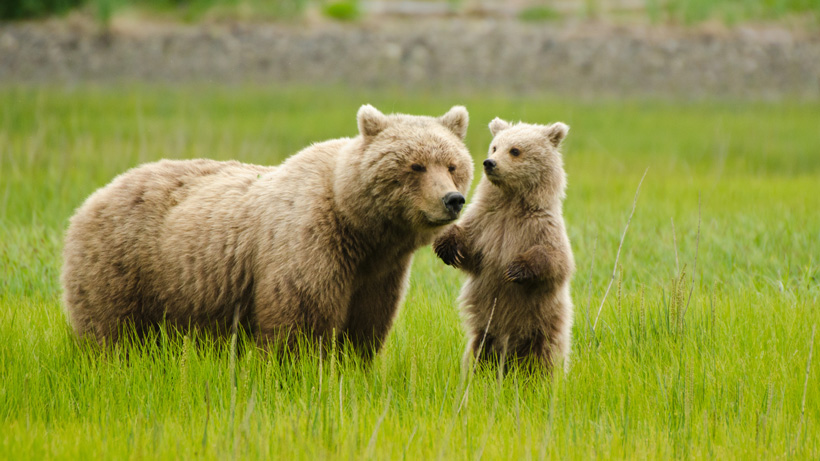 A British Columbia man is lucky to be alive after he surprised a grizzly bear sow and her cubs. Last month, Alex Neumann, who lives on “the forested outskirts of Prince George,” stopped for a little bit of fishing at his favorite spot along the Willow River on his way to a ranching job, CBC reports. However, instead of catching a bite, a bite caught him—in the form of a grizzly bear.

According to CBC, Neumann didn’t see or hear the grizzly sow and her three tiny cubs before she attacked, grabbing him on the shoulder, picking him up and biting down.

“It was like a popping sound. She had a good hold on me. I held on to her head when she grabbed me,” said Neumann. “If I hadn’t, I would have been ripped apart probably. She literally picked me up off my feet.”

While the bear initially “shook him twice” before throwing him “into a grove of alders,” it got worse once the cubs decided to pay attention to Neumann.

“Each time the cubs came, her aggression would build,” Neumann told CBC. “Her ears were down, she was clicking her teeth. She made huffing sounds at first. Then heavy guttural breathing that you could feel through your entire body.”

Neumann was starting to panic but knew he was his only hope of rescue. Despite his wounds, he was able to get up and start back towards his truck, talking to the grizzly bear to keep her calm. She followed him the entire way, “drooling, huffing and swatting the ground,” according to CBC.

“That was the most terrifying part,” said Neumann. “I knew if I were to trip she would be on top of me.”

Fortunately, he made it to his truck and was able to drive away.

“I was so glad she let me live, that was the main thing in my head. I felt this bear had the opportunity to pull me into a million pieces and she didn’t,” said Neumann.

Once he arrived at the hospital in Prince George, he was given antibiotics for his puncture wounds, lucky to be intact aside from those despite an infection he later developed under his shoulder blade. Unfortunately, he has lingering trauma from the attack, which led him to seek out counseling.

“I was just in the wrong place at the wrong time,” said Neumann. “I don’t want people to fear going in the outdoors, because it’s so beautiful.”