Bringing back the bison 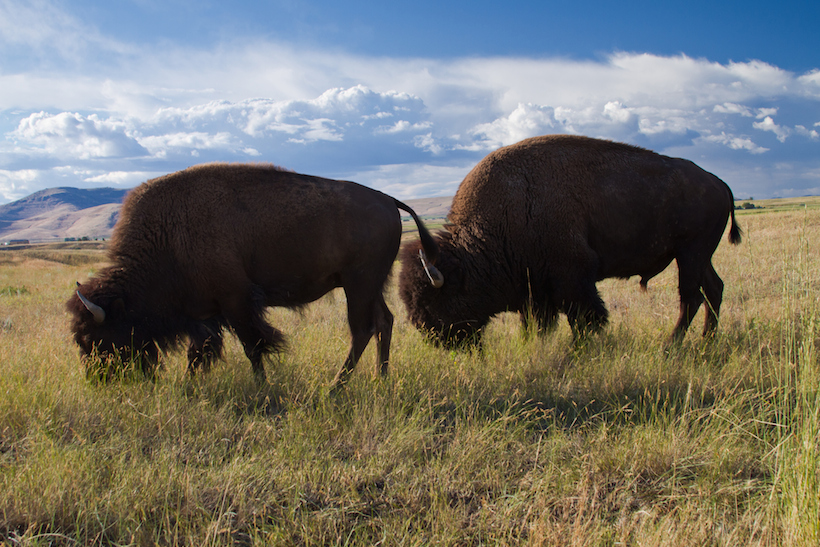 Montana has set its sights on bison. State officials are once again attempting to craft a bison-conservation plan that had previously stalled amid backlash from ranchers concerned about the impact of new herds.

Bison, an iconic species of the Plains, were nearly driven to extinction during the country’s westward expansion. When settlers first arrived on American soil, the plains bison population was estimated around 40 million animals. By the late 19th century, there were only a scant 25 bison left in the wild.

Thanks to concerted conservation efforts over the past century, bison populations have rebounded. Yet according to the Department of the Interior’s DOI bison report: “While bison are no longer threatened by extinction, substantial work remains to more fully restore the species to its ecological and cultural role on appropriate landscapes.”

A statewide strategy to manage wild bison has been underway in Montana since 2010. Opposition from ranchers, however, has necessarily slowed down the initiative.

Livestock owners have expressed a deep concern about the potential of bison restoration in Montana. They are worried about bison infringing upon their land, knocking down fences, spreading disease and stealing their cattle’s grazing space.

Rather than abandon plans for bison conservation, state officials have decidedly readjusted their expectations. In a recent interview, Governor Steve Bullock said that bison were “incredible animals in our history and in culture,” and that it was their duty to evaluate and ensure their future on Montana soil. Bullock then added that the ranchers’ concerns will be respected, and his role in bison restoration has its limits.

“I don’t have any plans on moving vast numbers of bison all over the state,” Bullock said.

Officials are entertaining a number of ideas for bison conservation, including the establishment of a free-ranging, 1000-bison herd somewhere in the state. More recently, however, Montana Fish, Wildlife and Parks director Jeff Hagener said a herd of only 50 to 100 bison would be a more feasible jumping off point. The bison, in this case, would be contained in some manner, as a sort of compromise between advocates who imagine herds roaming wildly across Montana and ranchers who are worried about preserving their land.

Montana State Senator Taylor Brown says the agriculture community will adamantly reject any proposal that would result in bison encroaching on private property.

“If we start another bison herd in Montana, then they need to be kept in a place,” Brown said. “I don’t see how you would treat it as a public wildlife resource…You can’t have that. It won’t work.”

A two-day panel on bison conservation is scheduled for July 14 and 15 in Billings, Montana. The forum had originally been scheduled to take place in Lewistown several months ago, but had been canceled after ranchers vowed to turn out in large numbers in opposition.

Indeed, the subject of bison conservation has sparked a great deal of debate, with many strong-willed groups and many strongly-based opinions. Yet Montana is not the only state embarking upon bison-conservation initiatives. There are a number of ongoing efforts to expand bison on federal lands. Here is a look at a few:

Arizona: The Grand Canyon National Park is conducting an Environmental Impact Statement in cooperation with the state of Arizona, USFS and BLM to formulate a long-term bison management plan.

Colorado: The Baca National Wildlife Refuge is developing a Comprehensive Conservation Plan that will explore options for bison conservation on the refuge. The Great Sand Dunes National Park and Preserve is developing an EIS for long-term elk and bison management, including potential bison restoration on NPS lands.

Nebraska: Plans are being discussed for potential bison reintroduction at the Agate Fossil Beds National Monument.

South Dakota: Discussions are underway between the National Park Service at Badlands National Park with the Oglala Sioux Tribe to restore bison on the park’s South Unit on the Pine Ridge Reservation. There is also potential for bison expansion at Wind Cave National Park.