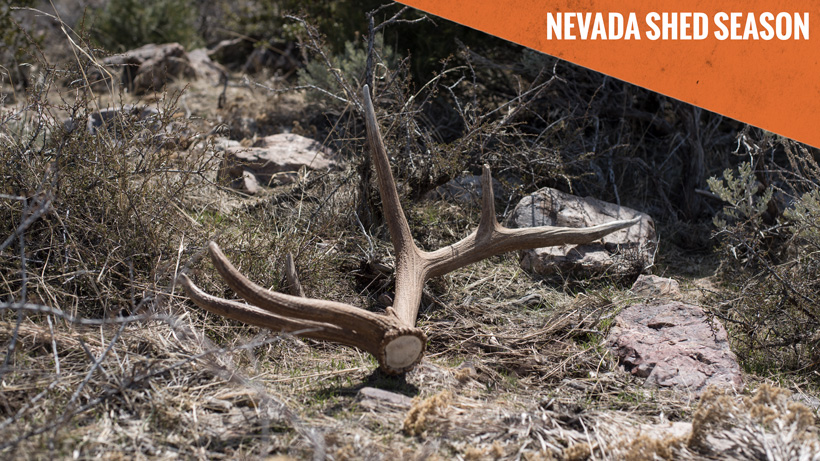 We had a call earlier this morning directly with the Nevada Department of Wildlife (NDOW) to confirm the new shed hunting season restrictions in Nevada. The shed season is currently in effect in six counties in Nevada. You can see their official statement from NDOW at the bottom of this article.

While working on Nevada application strategy articles in late January, I was talking with goHUNT’s Outfitter and Partnership Manager, Dennis Lee and he mentioned that he caught wind of a new shed hunting season in Nevada. After some digging in early February, I found the Nevada Department of Wildlife’s January Commission Meeting Agenda that was conducted on January 26 and published January 31, 2018, on YouTube.

Back in November of 2017, goHUNT reported that Nevada was considering a new shed season. You can read more on the preliminary report here.

"A person shall not take or gather shed antlers from or on any public land located in Elko, Eureka, Lander, Lincoln, Nye or White Pine counties at any time from January 1 to April 30, inclusive." Shed hunting is still open year-round in the other 11 counties in Nevada. Shed antlers means any antlers which have been naturally shed by any big game mammal in this State.

Screenshot from the Nevada Board of Wildlife Commissioners report. Original file can be found here.

A few highlights from the commission meeting:

When will this go into effect?

The new shed season is currently in effect in Nevada.

The only confusing part is if you watch the commission meeting in the video on YouTube below, the following information was reported from Game Warden Tyler Turnipseed at the 28:22 mark, “It wouldn’t actually legally go into effect until the legislative commission approves it. They don’t schedule their meetings until they’ve got enough regulations to speak to. My guess is that would be sometime in February or March...so then we’d be in a little bit of a question of, do we go ahead and roll this out even though it would go into effect in the middle of the closure time? And I guess my answer to that would be, we would ease into it gently you know, we’re not going to rush out this first year and scratch a bunch of tickets, especially since right now our winter seams fairly mild. If it were enacted during the middle of the season closure we’d probably take a more aggressive stance next year with it but go softly into it this year.”

Note: Keep in mind that quote was from January 26 and a lot has happened since that meeting. But it's definitely true that the shed season is in effect right now in six Nevada counties for the 2018 season.

It should be worth noting that the shed antler law passed unanimously 7-0.

Even though the shed law was passed unanimously, I felt it was best to not leak this article out there right away and wait until I had all the facts straight and a report from NDOW themselves. Back in early February, the details were a little fuzzy with the discussion that this new law wouldn't go into effect until the legislative commission approved it, which they now have approved the law. I'd rather stick to accuracy first on a new law as important as this.

You can watch the commission meeting below.

We’ve been in direct contact with NDOW and received the following press release early this morning:

The Nevada Board of Wildlife Commissioners has approved a new regulation that prohibits the taking or gathering of shed antlers from public land in Elko, Eureka, Lander, Lincoln, Nye or White Pine counties from January 1 - April 30 each year.

The regulation originated from petitions coming out of the eastern Nevada County Advisory Boards to Manage Wildlife (CABMW). These eastern Nevada CABMW have the most concentrated deer and elk winter ranges, most severe winters, and the heaviest shed hunting pressure. Shed hunting is still open year-round in the other 11 counties in Nevada.

The goal is to allow deer and elk herds in eastern and central Nevada to utilize their critical winter range habitats without being disturbed. As shed hunting becomes more popular each year, mounting pressure from shed hunters has forced animals to move onto sub-par habitat and expend crucial energy reserves during critical winter months.

Shed hunting is also creating increased traffic around big game winter ranges and results in habitat impacts and road degradation on both private and public lands. It was the combination of animal disturbance and habitat degradation that was the basis for the regulation.

Last year Nevada saw a significant increase in shed hunting pressure when, due to extreme winter conditions and deep snows, Utah closed their shed antler hunting season in an effort to reduce stress on deer, elk and moose to help more animals make it through harsh winter.

The closure was extended through April in an attempt to lessen habitat degradation and disturbance on breeding sage grouse.