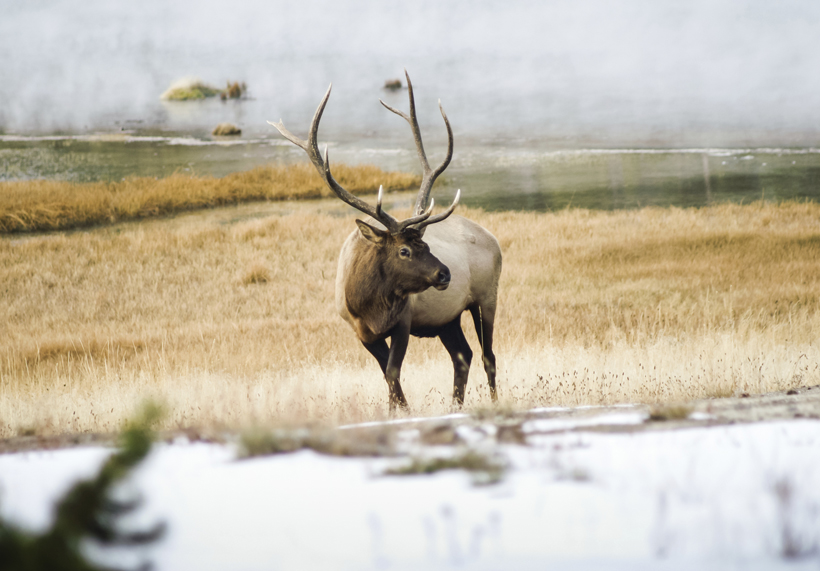 State wildlife managers have been concerned about elk numbers in the Bitterroot Valley in western Montana since 2009 when elk calf survival dropped to a historic low. At its lowest point, only 14 calves per 100 cows survived through their first year in a valley-wide average. In the West Fork region of the Bitterroot, the number plummeted to 9.

In the past couple of years, however, biologists have been reporting some welcome news in the Bitterroot.

Yet there is more than just the numbers that are giving biologists hope. The most encouraging news comes from the surveys that found an estimated 33 elk calves for every 100 cows in the region.

“That’s the highest calf count that we’ve had in the Bitterroot since 2006,” exclaimed Montana Fish, Wildlife and Parks regional wildlife manager Mike Thompson. “Even more encouraging than that is that we’ve seen a steady gradual upward trend since 2011.”

“This doesn’t look to be a one-year spike,” he added. “It appears to be part of a longer trend.”

To give these numbers context, consider 2009, when elk numbers reached rock bottom. At this point, biologists counted just 13 calves per 100 cows.

The current trend even seems to be expanding to West Fork, one of the hardest hit areas of the Bitterroot. Just a few years ago, the elk numbers here had plummeted to just 865 animals and biologists could only find nine calves for ever 00 cows.

This year, however, biologists counted 29 calves per 100 cows in West Fork, which is only slightly less than last year’s count of 33 calves.

Another good sign — the number of bull elk surviving the winter has also been increasing. This past spring, biologists counted 20 bull elk for every 100 cows.

In order to help the herd rebuild its numbers, FWP has limited elk hunting in the West Fork to a few permits since 2011.

Thompson says FWP will continue to take a conservative approach to issuing elk tags in HD 250.

“We want to really be sure that we’re out of the woods before we start making changes,” he explained. “We’ve only had a couple of years of good calf recruitment in the West Fork. We don’t want to be too quick on the trigger.”

The good news continues through the popular HD 270 in the East Fork region of the Bitterroot Valley as well.

“That’s the highest number we’ve had there since 2006,” Thompson proclaimed. “We even had a bump in bull numbers, at 17 bulls per 100 cows in HD 270. That’s quite a jump that actually puts us over the objective in our elk plan.”

The objective in the East Fork region is 15 bulls per 100 cows.

In addition to these statistics, biologists are also reporting other encouraging news.

Recently, a group of volunteers was working on the west side of the valley to cover drainage in hopes of getting a solid count on mountain goats when they made a very exciting discovery.

“Way up in the heads of these drainages, they heard elk talking to one another,” Thompson relayed. “These elk were way back in the backcountry.”

There has been a mounting concern that elk have been slowly moving away from national forest lands and down onto the valley floor.

“It was good news to know that there are still some back in there,” Thompson said.

Unfortunately, the news hasn’t all been good. Though the Bitterroot’s elk herd appears to be on the rebound, Thompson said the outlook is not as hopeful from the area west of Missoula and south of Interstate 90.

“While we were able to catch the downswing in the Bitterroot early – hats off to Craig Jourdonnais and the community – we haven’t been able to prevent the decline in the lower Clark Fork,” Thompson lamented.

Historically, biologists would count about 400 elk during springtime surveys in the Upper Fish Creek area. The counts have plummeted to around 50 animals.

“I don’t know that we have the capability to try to prevent the decline beyond the threshold,” Thompson confesses. “I don’t know if they will bounce back. Most likely, we’ll always have elk in that area, but their numbers may remain low.”

Thompson says the low numbers can likely be attributed to wolf predation.

“While it didn’t turn out to be the wolf in the Bitterroot, the lower Clark Fork has a high density of them,” Thompson explains. “Just on the other side of the mountains, Idaho had a similar issue. A study there found wolf predation to play an important role in lower elk numbers.”

The other elk herd hat has managers concerned is the one in the Blackfoot-Clearwater Wildlife Management Area just north of Montana Highway 200 and east of Rogers Pass.

“The calf-cow ratio is down in the teens,” Thompson laments. “It’s been there for a while. We’re watching those populations very close.”