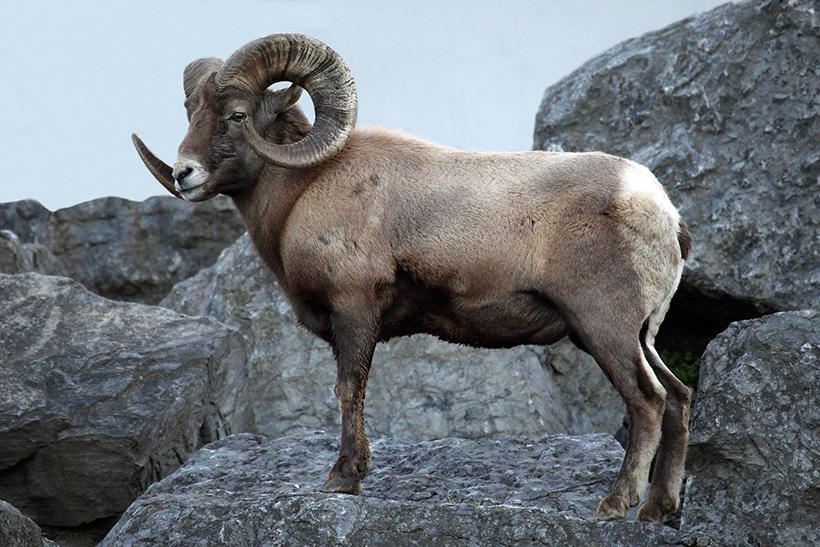 Trophy hunters are not causing Alberta’s bighorn sheep to evolve into something smaller and less impressive, a new study says.

Earlier studies have found that the average horn size of a six-year-old bighorn in trophy-hunted populations in Alberta and British Columbia has decreased by about three centimeters over the last three decades. Trophy hunters typically prefer rams with the biggest horns, particularly 4/5 degree curled horns. Some scientists had suggested that by targeting larger-horned ungulates, the smaller-horned rams have a greater opportunity to reproduce and pass along their DNA — a kind of reverse natural selection.

To see if trophy hunting really was creating an evolutionary response, biologist Lochran Traill and his team of researchers designed a mathematical model to show whether inheritance has a strong effect on body mass in Alberta’s Ram Mountain bighorn population. They examined body mass instead of horn size since there is a strong correlation between the two, and they lacked the necessary field data on horn size to create a functional model.

The team looked at the effect on body mass within the population when they increased mortality rates of adult and senescent males weighing more than 100 kilograms. They discovered that decreasing the number of large adult males who lived long enough to reproduce had a negligible impact on inheritance.

“Body mass is only weakly inherited,” said Lochran Traill, a biologist at Imperial College in London. “Thereby, any evolutionary response of the targeted trait to hunting is negligible.”

The model also showed that there was a significant effect on average body mass among older males and a general shift in the sex ratio towards females. These results indicate that while trophy hunting is not correlated to evolutionary behavior, by targeting larger males, hunters cause the average body mass of the ungulates, and therefore, average horn size, to decrease.

“Any shift in the distribution of body mass among males is demographic,” Traill said. “Changes are largely driven by the removal of larger animals.”

The research, published in the Proceedings of the National Academy of Sciences, inherently implies that the number of larger males with fully curled horns could rebound if hunting pressure goes down.

“Any decreased frequency of hunting will simply mean that fewer large males are being shot, and thus the likelihood of large males being found in the population may increase,” said Traill.

Traill also believes that giving larger males the chance to breed can benefit the health of a herd.

“It will always be better to let males in their prime breed,” said Traill, who added it is “prudent practice” for hunters to select older males “past their mating prime.”

The Alberta regulators will likely take such models into account when developing rules to promote conservation.

“We are in the process of completing a new management plan for bighorn sheep,” said Carrie Sancartier, spokeswoman with Alberta Environment and Sustainable Resource Development. “Once that is completed there is expected to be a public discussion that will include harvest.”