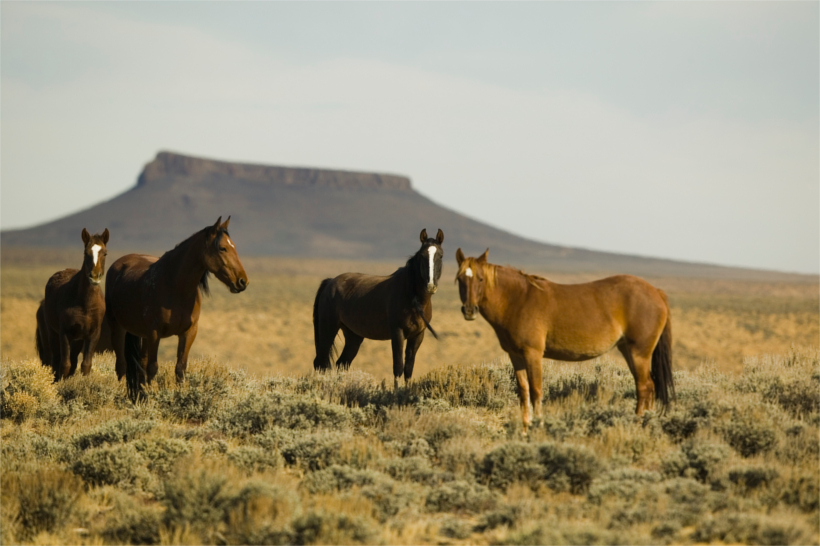 Nevada has proposed rounding up at least 4,000 wild mustangs in an effort to coral their range. This movement would not only extend livestock grazing on the federal lands, but state officials say that it would also help the greater sage grouse. Yet, wild horse advocates disagree, noting that cattle actually create more hardships on the sage grouse habitat than wild horses – and removing the horses is purely economical, not a step towards sage grouse recovery.

The state is targeting mustangs in the four herd-management areas in Elko County near the Utah line. Nevada has nearly 28,000 wild horses within the state, according to the Associated Press. Wild horses also roam across Arizona, California, Colorado, Idaho, Montana, New Mexico, Oregon, Utah and Wyoming and federal officials estimate that there are roughly 47,000 within these states – much more than the land can handle.

BLM Nevada Director John Ruhs estimates that it would cost about $4 million to remove 4,000 horses from the targeted area. He writes in an April 13 letter to BLM: “Some of the allotments/pastures within the impacted area will need to be closed to livestock grazing in 2016 and into the future to limit further damage to these ecosystems or until appropriate management of the wild horses has taken place.”

Yet, those who oppose this mass removal believe that the cattle would actually be more damaging to the range than the wild horses and the endangered sage grouse.  Suzanne Roy, director of the American Wild Horse Preservation Campaign, says that it’s not “an excess horse problem,” but instead “a management problem.”

"The BLM is scapegoating wild horses instead of addressing the true causes of range degradation and threats to sage grouse," says Roy.

Roy’s sentiments are ironically backed by Nevada Cattlemen's Association President David Stix Jr., who says, “Unfortunately, the removal of cattle from areas where horse populations are significantly over (appropriate management levels) does not alleviate the impacts to native species, including sage grouse."

While Nevada officials try to push forward with the removal plan, the U.S. Bureau of Land Management has remained mum. According to the AP, budget shortages – due to housing the 45,000 wild horses already in captivity – mean that there are no plans for any type of roundup anywhere through the end of September.  Regardless, Nevada officials threaten action no matter what it takes.

Gov. Brian Sandoval vows that “the state will pursue all legal options to protect our local producers and communities.”