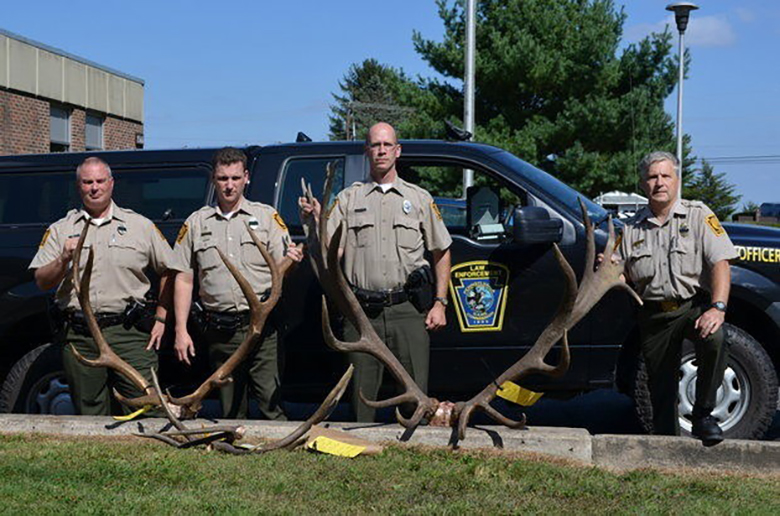 The Pennsylvania Game Commission has charged three men with illegally killing three elk, including one of the largest bull elk ever recorded in the state of Pennsylvania.

Frank Gordo Buchanan Jr., 25, and Jeffrey Scott Bickel, 46, both of Bellefonte; and Cody Allen Lyons, 20, of Milesburg, are accused of killing three elk in the Karthaus Township area of Clearfield County.

The largest of the three bulls had a 10- by 9-point non-typical rack that initially was measured at 432 7/8 inches, based on standards set forth by the Boone & Crockett big-game scoring program. At that score, and if the bull had been legally harvested, it would rank as Pennsylvania’s third-largest bull elk ever.

If the men are convicted of the crime, the Game Commission said it will seek $11,500 in replacement costs for the illegally killed elk. Each man will also face thousands of dollars in fines, with the maximum potential fine exceeding $13,000.

The investigation began, according to the Game Commission, after a local resident discovered the first illegally killed elk (the 4- by 5-) on September 9. The antlers had been removed, but most of the carcass had been left behind to waste.

Then, on September 15, while working night patrol, Gritzer returned to the area where the bull was killed. Around 9 p.m., he parked his car in an area overlooking a reclaimed strip mine where a number of elk could be heard bugling. Within 15 minutes, Gritzer spotted a pickup approach the area. The driver of the car would turn off the headlights each time the pickup stopped

At approximately 9:45 p.m., a single gunshot blasted from the area of the pickup.

Gritzer immediately called for backup and drove to the location where the pickup was parked with its headlights off. Backup WCO Dave Stewart arrived on the scene, and the two officers found a 7 mm rifle lying on the ground nearby. The rifle was consistent with the caliber used to kill the 4- by 5-point bull on September 9. The officers also found a handsaw coated in elk hair and tissue in the pickup.

Buchanan confessed to shooting at a large bull elk and all three men were arrested. After being taken into custody, Buchanan also admitted to killing the bull elk on September 9.

Buchanan then led Gritzer and Stewart to a trailer home in Milesberg, where officers found a sawed-off set of antlers that matched the skull plate of the poached bull.

A subsequent search in the area of the arrest revealed two more dead elk — the 10-by-9, which had been shot in the neck with a 7 mm, and the 5-by-7.

Further investigation showed that the men had killed the 5-by-7 at around 8:15 that night, before leaving the area to go to the town of Snow Shoe to find a chainsaw to remove the antlers. Gritzer had arrived in the area by the reclaimed strip mine after they had left. Then, when the men returned, they killed the 10-by-9.

Buchanan told the officers that he intended to sell the antlers on eBay.

Buchanan and Lyons have been charged in the September 8 and September 15 incidents. Bickle is charged only in relation to the two bulls killed on September 15. Each man faces multiple charges, the most severe being misdemeanor counts of unlawful killing of big game.

“Elk are not yet in season. We have a very limited number of elk licenses that we allocate each year and this year that number is 108, that are awarded by lottery. These three gentlemen were not licensed hunters and took these three elk, based on our allegations, in a closed season. The method of their take, particularly pulling up in a vehicle, shooting while spotlighting, shooting from a vehicle, all of those actions are illegal as well.”

A preliminary hearing for the men is set for October 29 at the Clearfield County Jail.