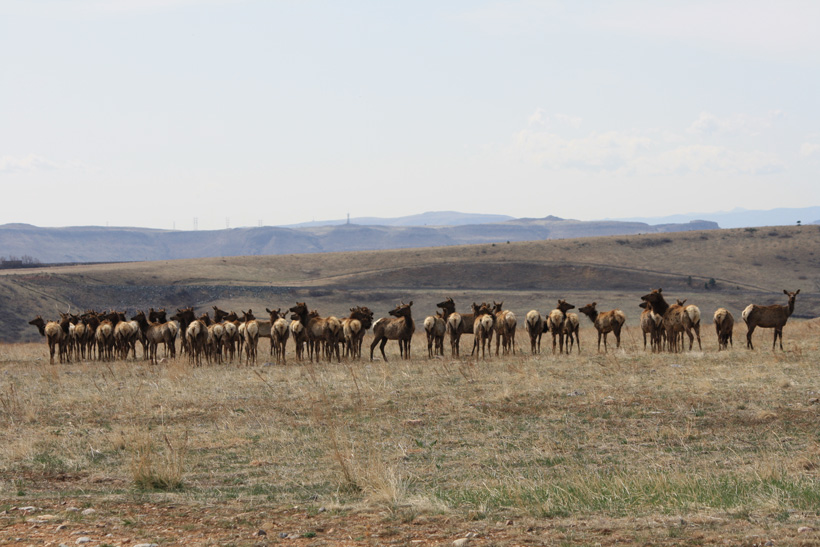 On the second day of Montana’s general big game season, dozens of hunters converged on a large herd of elk near Canyon Ferry Reservoir. While many of those hunters took clean shots, some reportedly fired into the herd, shooting at running animals and generally engaging in what many consider to be unethical behavior.

Montana Fish, Wildlife and Parks (FWP) wardens say some 30 elk were killed on Oct. 26, an unknown number were injured and an illegally killed spike bull elk shot and left to waste. Officials also seized a 5x5 bull from one of the shooters.

“Unfortunately a situation like that brings out the worst in unethical hunter behavior,” Warden Sgt. Dave Loewen stated the following day. “If I could emphasize one thing, it’s that type of activity drains local game wardens babysitting elk and unethical hunters. I wouldn’t even consider it hunting.”

According to Warden Justin Feddes, the herd of about 500 elk split and moved between public, private and block-management land (overseen by the state and by landowners) throughout the day as hunters continuously shot at them. As word of the herd spread, more hunters arrived to take part, with some attempting to keep the elk on the flats with their vehicle. The elk were essentially being corralled.

“There were a bunch of cows (female elk) and they were swirling around trying to keep this year’s and last year’s calves in the center,” relayed Betsy Brandborg, who was on her way to a hiking trail near White Gulch when she saw two lines of hunters preparing to fire into the herd. “Where could the elk go? They were trapped.”

Local landowner and outfitter Kelly Flynn told the Helena Independent Record that he saw a large number of vehicles parked in the area, and believes that the hunters were using cellphones to coordinate the hunt.

Montana Code 87-6-405 addresses the use of vehicles while hunting. According to the code: the “use of a self-propelled vehicle to intentionally concentrate, drive, rally, stir up, or harass wildlife, except predators of this state,” is unlawful.

As it is, however, proving that hunters are intentionally using vehicles to herd animals is difficult, said Warden Justin Hawkaluck.

By the end of the day, three hunters were issued citations.

Robert B. McCaslin and Brett Gene McMurphey, of Great Falls, were both cited for hunting big game without landowner permission. Feddes confirmed that those citations occurred on private land that was not open to public hunting. Kenneth S. Garrison, of East Helena, was cited for failing to obtain landowner permission on the Hensley Block Management Area. According to the citation, wardens also seized a 5x5 bull elk from Garrison.

All three hunters were ordered to appear in Broadwater County Justice Court. The citations carried a $170 bond.

“We issued a whole lot of verbal warnings,” Feddes added. “It’s a drain with three of us up there all day long tying us all down.”

When resources are directed towards monitoring hunters in a specific area, wardens are unable to patrol the rest of their territory. This leaves room for other illegal activities such as poaching.

Events like what transpired over opening weekend ultimately give hunters a bad name, noted Kelly Flynn, who also caught trespassers on his land, but chose not to prosecute.

Sadly, the mob mentality of hunters when they surround elk on the flats is something that he has seen in the past.

“People seem to lose some of their common sense when there’s that many elk that close,” Flynn said. “It’s difficult to watch, and I’ve talked to several people who did see it and said it was as ugly as it could possibly be.”