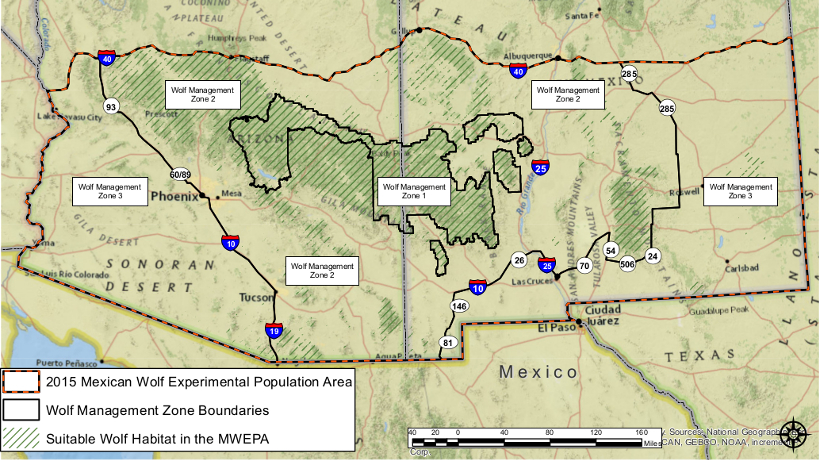 The Mexican wolf population is on the rise with 113 wild Mexican wolves counted during the 2016 Mexican Wolf Reintroduction Project (MWRP) population survey. With their range spanning both Arizona and New Mexico, biologists rely upon fixed-wing aircraft and helicopter to conduct the aerial survey, basing the final number off of radio telemetry and actual wolf sightings. The 2016 tally is higher than 2015’s count of 97 wild wolves, according to the MWRP report.

“We are encouraged by these numbers, but these 2016 results demonstrate we are still not out of the woods with this experimental population and its anticipated contribution to Mexican wolf recovery,” said U.S. Fish and Wildlife Service (FWS) Southwest Regional Director Benjamin Tuggle in a press release. Tuggle says that the goal is to increase the Mexican wolf population by 10% each year; however, based upon when the survey is conducted (November through February), sometimes the reported number drops or increases, depending on the number of wolf pups born in the spring and their survival rate.

According to FWS, this year’s survey:

Mexican wolves disappeared from the wild in the 1970s. While the reintroduction of the Mexican wolf is one of the more controversial recovery efforts, FWS continues to move forward with its mission to bring this specific subspecies of the gray wolf back to its natural habitat.