Tips for bowhunting the grey ghost 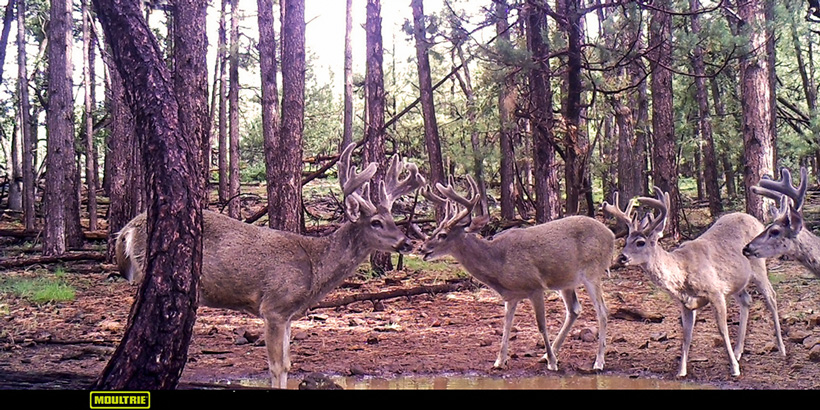 When most people think of hunting the Coues whitetailed deer, they envision the cactus-covered deserts of Southern Arizona, Eastern New Mexico or Northern Mexico. Hunting the desert at the end of summer means enduring sweltering heat and trying to avoid dehydration — just for the chance at a Coues buck. However, in Arizona, the tiny deer also inhabit the northern regions of the state where temperatures are much cooler that time of year, making it a more enjoyable hunt for the wily Coues deer.

Coues habitat is divided by the Mogollon Rim, which stretches across the majority of the state, beginning near Ashfork, Arizona and continuing its rocky outcrop into New Mexico. Northern Coues country is everything north of the rim and includes Game Management Units 6A, 6B, 8, 22, 23 and 27. The best part about these units is that you can purchase an Arizona hunting license accompanied by an over-the-counter (OTC) archery tag and bowhunt velvet Coues bucks for three weeks this summer. Additionally, you can use the same license/tag combination to bowhunt hard-horned bucks an additional 52 days during the winter, if you choose to (limit is one deer per calendar year).

In Arizona, you can bowhunt with an OTC deer tag during the following seasons. 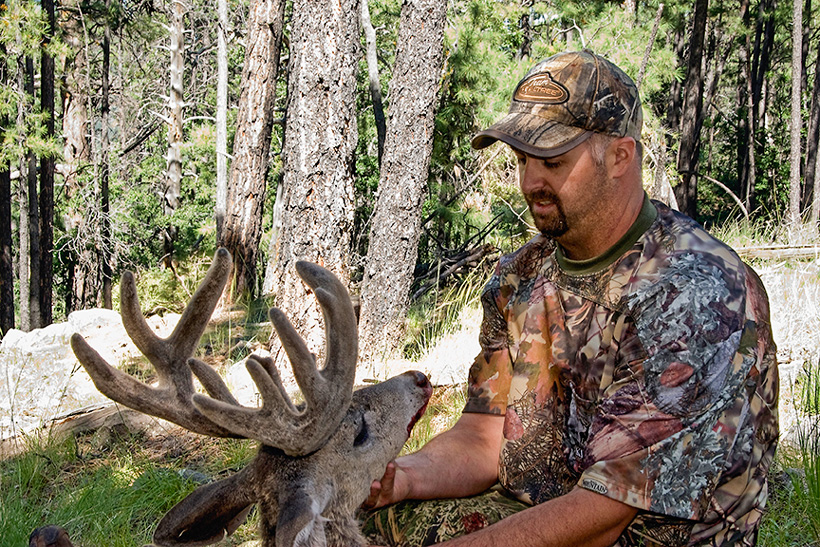 Bowhunting for velvet bucks in the northern most reaches of Coues country is without question a challenge! In fact, many expert Coues hunters would suggest that it is the most challenging big game hunt in North America. Above the Mogollon Rim, Coues deer thrive in pinyon-juniper woodlands as well as ponderosa pine and mixed-conifer forests at elevations over 6,500 feet above sea level.

In the high country, Coues populations are small and isolated, making it difficult to locate a sizeable population, much less a mature buck. Here, Coues deer prefer edge habitat where unpredictable winds make it difficult to find the perfect ambush site. Furthermore, the late summer hunt aligns with the monsoon season, making water a plentiful resource and hunting over it a difficult proposition.

How to overcome challenges 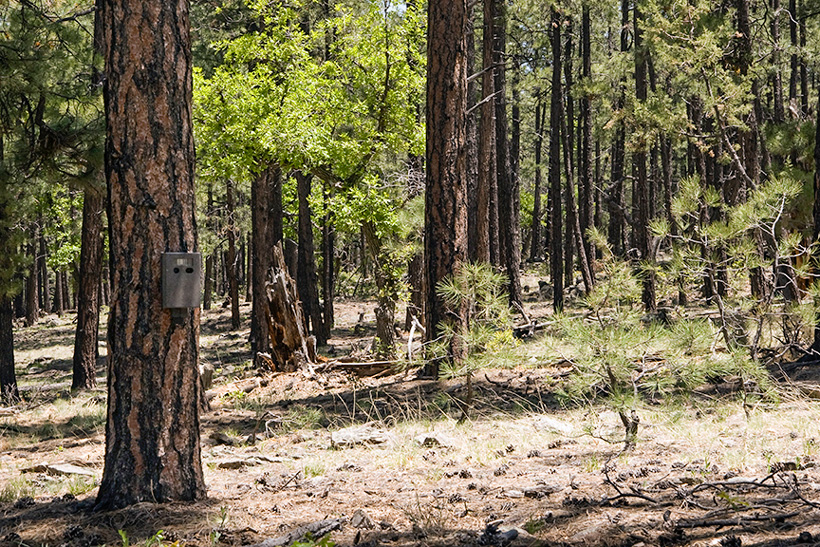 Although bowhunting Coues bucks above the rim is challenging, it is not impossible. The first challenge to overcome is finding a few Coues deer and, eventually, a buck. Scouting is a necessity, especially when looking for Coues bucks above the rim. In the lower elevations — pinyon-juniper woodlands — the vegetation is sparser, making it more glassable than higher elevations; however, this transition zone is also usually flat terrain, which can make it difficult to glass effectively. In the higher elevations — ponderosa pine and some mixed-conifer forests — glassing is not an option because the vegetation is too thick.

The easiest way to overcome this obstacle is by using trail cameras to aid in the scouting process. Used correctly, trail cameras can gather invaluable data 24 hours a day, including what bucks are in the area and what time they are there. Trail cameras can be placed on water sources, mineral sites and on game-trails. If you like your camera, I suggest not placing it on water as the probability of it being stolen is high, even if you lock your trail camera. If you use mineral sites, be sure to thoroughly research and understand its legalities in Arizona. Below is an excerpt from the 2015-2016 Game Regulations: 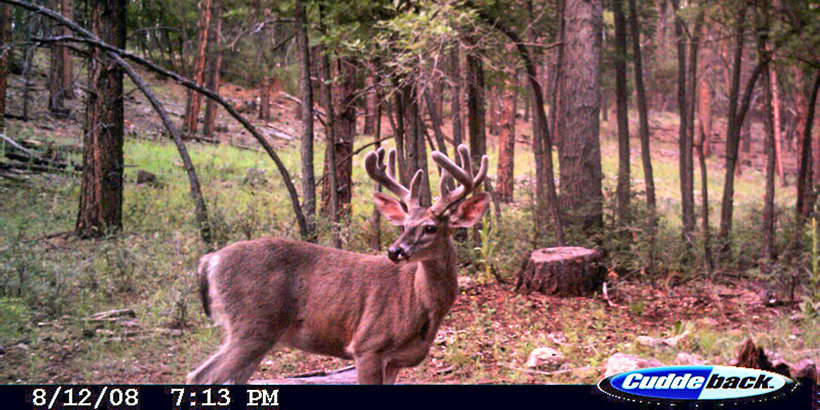 Although you may capture bucks on camera on water or mineral sites during summer scouting, be aware that as September nears, bucks will be less likely to remain on this pattern as fall approaches. If you can find a well-defined game trail that connects two or more resources that deer are using, this may be your best bet for harvesting a mature, velvet Coues buck. The goal here is simple: find a location that bucks frequent every day rather than every few days or weeks. One method of finding such a spot is to stealthily, still-hunt between resources during likely movement times (early morning and late evening). If you see deer movement, hang a camera and see what you get. This tactic has proven effective for me on many occasions.

Coues deer, like their eastern counterparts, are habitual and patternable. Put the goHUNT INSIDER tools to work, especially its mapping features, to find Coues bucks. Below is a short list of topographic features to look for Coues bucks while scouting:
1. Edge habitat (canyons or places that provide a getaway that is steep and rugged).
2. Peninsulas (flat area adjacent to two canyons or steep ravines).
3. Saddles.
4. Ridge tops.
5. South-faced, brushy hillsides. 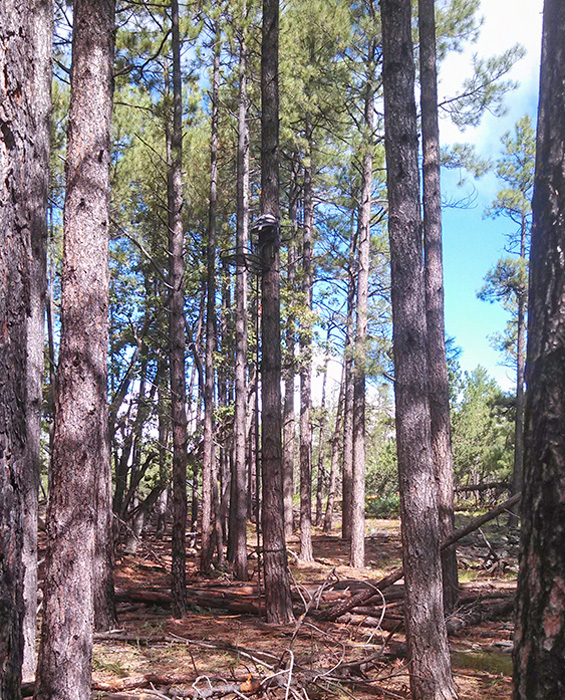 Once you have a few likely locations and, hopefully, a few bucks to hunt, set up a few tree stands and/or ground blinds to hunt from. It is fine to have a primary stand as a favorite, but set a couple to be sure. Also, be sure to let a stand cool off after a couple days of sitting and move to a different location. Set up a backup stand or blind to account for different winds. If your primary stand site appears to be best for a specific time of day, set another stand for the opposite time of the day. For example, you may hunt a mineral site in the morning because that is what your collected data suggests and then hunt over water in the afternoon when deer are more likely to quench their thirst.

Bring on the hunt

Without question, hunting Coues deer in the summer means being dedicated to the challenge. Morning comes early in August and September and the days are long. Dedicated hunters have the best chance of a successful harvest. 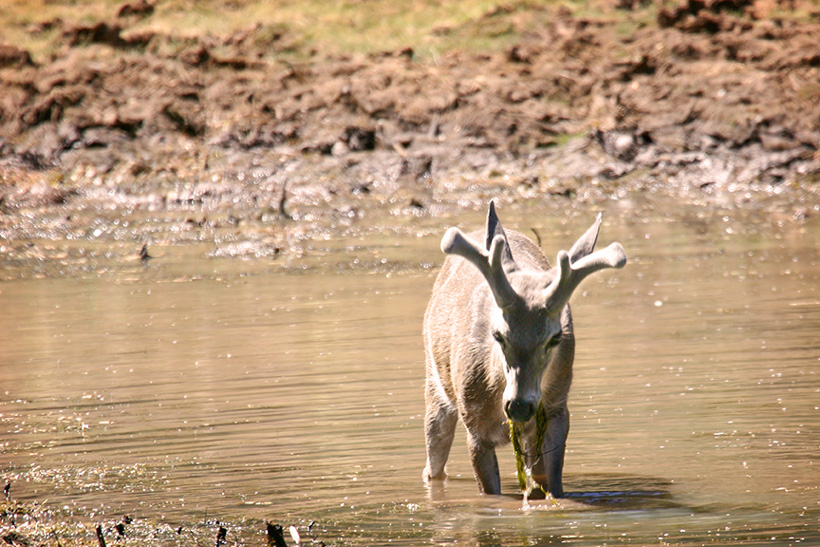 Following these guidelines will not guarantee success, but if you do, your chances at a Coues buck this year will be higher than most. 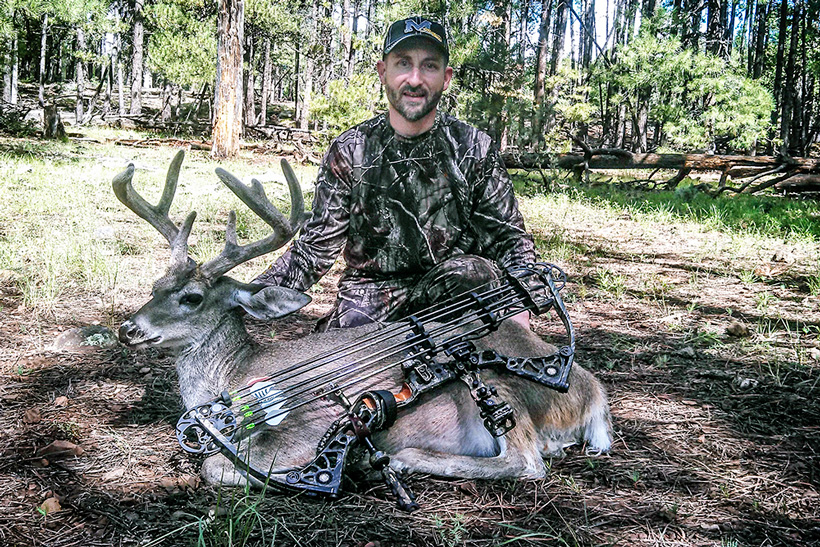 The early season Coues challenge is a difficult quest, but it can also be exceptionally rewarding. Thorough scouting is paramount when bowhunting Coues deer above the Mogollon Rim. The goHUNT INSIDER mapping tools are the perfect scouting partner so put them to use. Once on the hunt, put in as many days as possible and stay on stand for as many hours as you possibly can. Alternate stands as needed to keep your stand sites fresh and hunt specific locations at the times your data collection suggests. For the best chance at taking a trophy buck, I suggest hunting during the last two weeks of the hunt. Since Coues bucks lose their antlers late — sometimes as late as June — their antlers are still developing in the early days of the hunt in August. Keep these concepts in mind to give yourself the best chance of harvesting a trophy Coues buck in velvet in the high country of Arizona this summer.