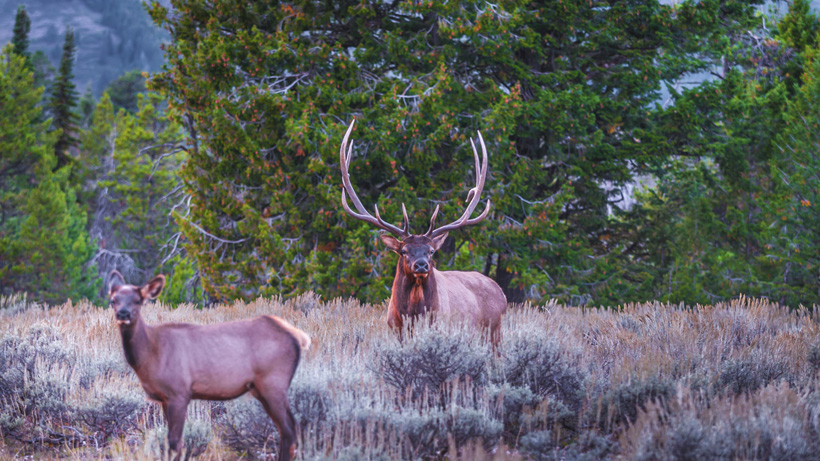 One of the most anticipated draws each year seems to be Montana, and for some, Montana is in the cards for 2022 while for others it is not. The Montana general tag can be a very exciting hunt for anyone with the tag; however, the freedom with this tag can be overwhelming at the same time. With either the general deer or general elk tag in Montana, hunters can hunt any unit in the state that is classified as general for the respective species. In both cases, this leaves hunters with access to about 85% of that state. The landscape is vast, the terrain comes in every variety and adventures are endless. In short: deciding where to hunt Montana can be a daunting task. Below, I am going to break down elk populations from around the state, hunting conditions in each of the seven regions and my favorite methods for finding a good general unit.

Montana is comprised of seven administrative regions for management. A great way to start looking at Montana is to start with the herd populations in each region. 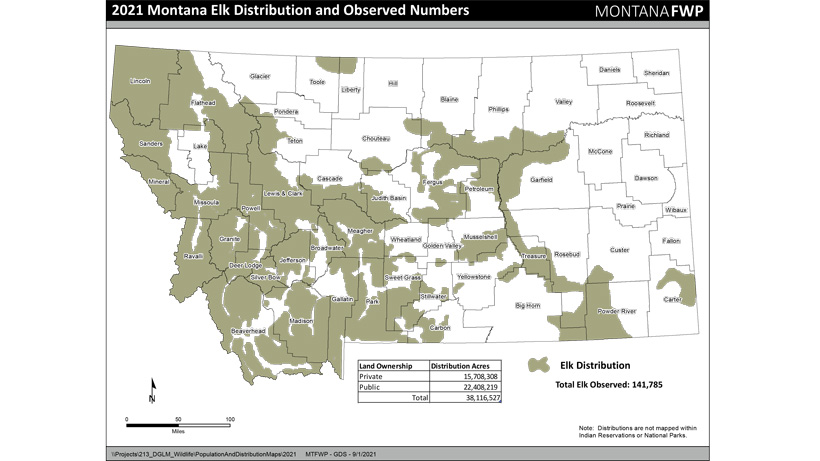 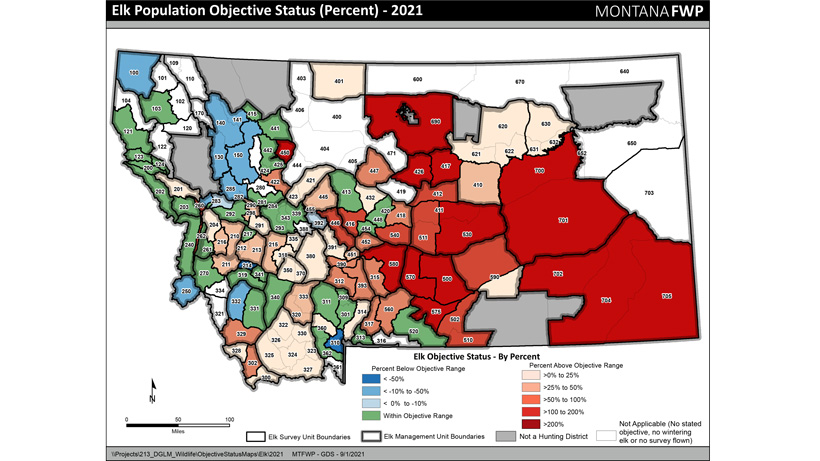 Region 1 has been struggling for the past several years and elk populations continue to struggle. The terrain here is very steep, very thick and unforgiving. Trophy potential, in general, is low; however, this area does have everything it needs to produce some incredible animals — and it has! Personally, unless I had some great intel I would not choose Region 1 as my go-to.

Region 2 has dipped slightly in recent years, but the quality of hunting is still great. Lower densities of elk are found here than in some other regions and good, hard hunting can — and does — lead to success. Most hunters will generally kill raghorns and younger six points; however, bulls can grow very large in this part of the state. Vegetation can be dense and terrain steep, but there is good elk hunting to be found for those willing to work for it.

Region 3 has the highest elk population and, consequently, the highest number of hunters. In general, far more glassing opportunities will be found here than in Regions 1 or 2, but periods of heavy timber will still be encountered. Elk habitat is great and most units have a great distribution of public lands. Grizzlies are in a number of units within this region and hunters will want to plan for that.

Region 4 is often overlooked but has some exceptional hunting opportunities. Large ranches will be somewhat more prevalent, leading to access issues; however, decent elk numbers and lower predator numbers can lead to some quality hunting.

A lot of Region 5 will be comprised of huge expanses of private land; however, there is a fair amount of roadless country to explore, too. Some great bulls are taken in this region every year, although most of these will be found on private land.

Region 6 has the lowest number of elk even though the elk habitat in and of itself is smaller and densities in these areas remain good. The primary focus for hunters in this area will generally fall along the famed Missouri River Breaks. In actuality, some of the biggest bulls in the state are killed in Region 6 every year. This area is hunted primarily through permits and is not accessible to those with general tags in most cases.

Region 7 has been coming on stronger in recent years and the elk population has been growing. These hunting districts are largely comprised of private lands, but some good public land is still available. The reigning world record bull was killed in 2016 in Region 7. This area is hunted primarily through permits and is not accessible to those with general tags in most cases.

HONING IN ON YOUR HUNT DISTRICT

Once you’ve started to get an idea of the type of terrain in the part of the state you want to hunt, it is time to start deep-diving into the individual hunting districts (HD) and their respective terrains. Filtering 2.0 and GOHUNT Maps are key for my research at this point. Filtering 2.0 will be my first stop as this will help me first identify a handful of units that pique my interest. From there, I jump into Maps and really begin to dig into each individual HD and see which ones start really grabbing my attention.

The first thing I’m going to do is head over to Filtering 2.0 and jump on Montana Elk, General. Filtering 2.0 will display all of the districts with general license opportunities on the map. Then, I jump into the various filters and start breaking the map down. If I have a particular region in mind, I’ll focus on that area initially; however, going into Filtering 2.0 with an open mind can lead to unexpected hunts, too.

A quick note on the Animals Harvested filter

In Montana, we use Animals Harvested as a data point in place of Harvest Success. Montana Fish, Wildlife and Parks (MT FWP) has an odd way of collecting and presenting harvest data and, unfortunately, does not provide the correct data to accurately provide harvest success rates by weapon, species, or tag. Because of this, we opted to display animals harvested instead. Animals Harvested will include bulls killed with all weapon types and on all tag options.

This data point is not filterable in Filtering 2.0 but is another one I like to look at. The Bulls 6 point+ data point is the number of bulls killed in that district that had 6 points or more on one antler. Obviously, a higher percentage on this lets me know that the area could hold a higher density of mature bulls.

TAKING IT TO THE MAP 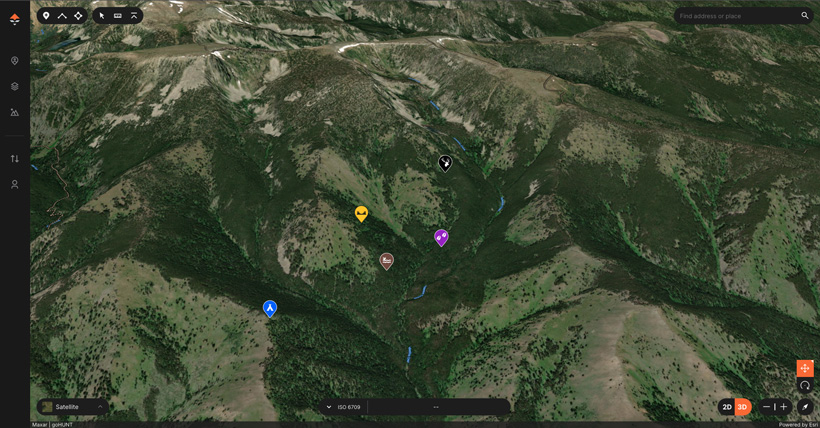 Once I’ve got my list of target districts filtered down, I like to jump over to GOHUNT Maps and start analyzing each area more in-depth. While on the map, I am looking for terrain features, roadless country, roads and trails, etc. There are many terrain types available in Montana and there is a hunting opportunity available for anyone with a tag. Regardless of where you are hunting in the state, there are a few things I learned over the years that have really helped me escape people and find elk in Montana.

GOHUNT’s web and mobile mapping app is key to e-scouting success! If you’re not a current Insider or Explorer member, now is the best time to join to get access to the best maps for hunters.

Jump over to GOHUNT Maps here

My favorite things to consider when e-scouting and hunting Montana

This is an obvious no-brainer, but deserves its own spot in the limelight. We all know that elk need three things: food, water and shelter. If you can find all three of those in close proximity, you will generally find elk or elk sign. Even if something looks incredible on your maps, it’s always important to keep one thing in mind when in the field: “Elk are where you find them.” Stay flexible while hunting. If you aren’t seeing sign of elk, then move.

Maintained trails can be a great way to quickly access some of the backcountry areas. Yet, these areas will also attract other hunters and those with livestock. I will utilize trails from time to time; however, if my true destination includes a trail in the immediate area, I’ll cross it off the list. Instead, consider basins you have to hike from the trail to reach and you will find yourself with far less competition.

Again, this is another no-brainer, but locating areas with less road activity will increase the likelihood of finding elk. The average hunter in Montana will generally not venture much more than a mile or mile and a half from a road — even less, if the going is tough. Western Montana is full of closed logging and mining roads; these can be excellent options for accessing deep basins, but will also draw some attention. In my experience, most hunters utilizing these closed roads will simply walk the roads and bugle. Getting off the beaten path could lead to some exciting action.

This is perhaps my biggest piece of advice. Don’t immediately look for the deepest and nastiest terrain you can find. There is nothing wrong with that, but hunters will often walk past elk to find elk. Some of my better spots in Montana were close to roads, but brutal to get into. Sometimes, even a square mile of good habitat that is unpressured will hold some incredible hunting action. Looking for areas where a massive climb is needed from the truck, which will weed out nearly all other competition. My mantra has always been, “If it looks terrible to hike into then there is a high chance of finding elk there.” A lot of people like to hunt in the backcountry, but there is a definitive zone between the road hunters and the hardcore guys where good elk will live and die every year.

For more in-depth info on how I e-scout for archery elk, check out this recent article below:

Tips when e-scouting for archery elk

In general, most units in Montana can provide great hunting opportunities for elk. Some are certainly better than others but don’t over stress the need for the best district. Find a terrain type that speaks to you, the unit that has the data that attracts you and e-scout your tail off until the season arrives. Good hunting will be found throughout and there are a lot of adventures to be had.