Male/female ratios: What does it mean for hunters?

As an avid hunter, I regularly attend the Utah Division of Wildlife public open house meetings where sportsmen have the opportunity to hear the state proposed management strategies for the year. At these meetings, the public has the opportunity to ask questions, express concerns and comment on how they believe game populations should be managed. Although the topics of discussion vary widely, without a doubt in every meeting the terms “buck to doe” and “bull to cow ratio” always seem to strike a chord and bring the level of chatter in the room up a few notches.

Naturally, as hunters, we want bigger bucks and bulls and we want more of them, but we also want to hunt regularly, right? There seems to be a relationship that exists between male/female ratio, trophy potential, and opportunity. Understanding this and a bit more about male/female ratios can greatly benefit us in our efforts to obtain a permit and pursue the buck or bull of our dreams. In this article, I will elaborate on the male to female ratio: what exactly it means, how the ratio is determined, what part it plays in management and how we can use this information in our annual application strategies.

You can filter and sort by male:female ratios on Filtering 2.0.

What does male to female ratio mean to a hunter?

The sex ratio of a wildlife population can vary at different stages of life, but the one that you are likely to encounter in reviewing state game reports is the number of adult males for each adult female in the population. This ratio includes any animal a year and a half old or older and excludes fawns/calves. Across the western states, these are post hunting season/wintering population ratios, which are generated during post hunting season surveys conducted by game and fish departments or through population modeling based on harvest/age surveys from the previous season.

For mule deer populations, surveys are conducted from November to January and are designed to coincide with the rut when deer are most visible. Surveys for elk generally occur in winter months when weather conditions congregate animals onto winter ranges where they are more easily counted. Depending on the state, surveys may be done aerially, on the ground or can be a combination of both. Surveys can also be generated from developed population modeling programs. Generally, these overall populations and buck to doe ratios are approximates developed from the best available surveys and modeling.

Why more females than males in ungulate populations? 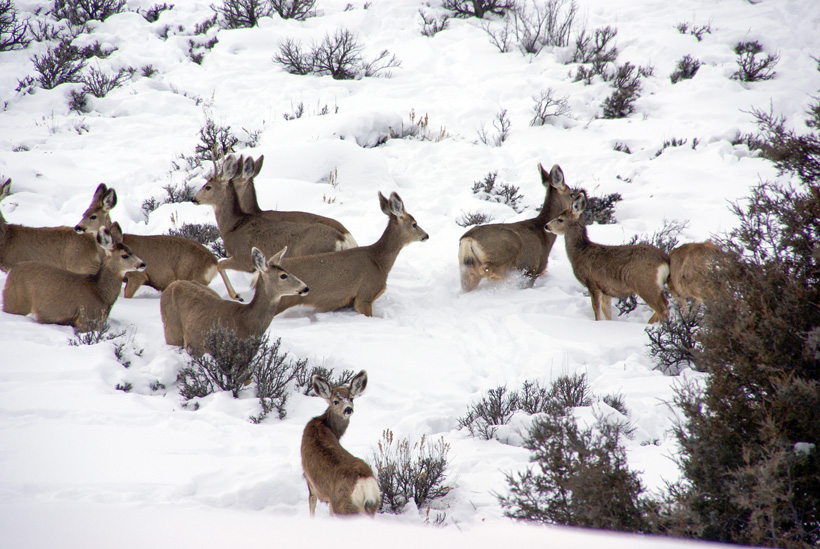 At birth, the sex ratio is nearly 50:50 or at the most slightly skewed with more males than females. Yet, at adult stages, most of our western big game populations have a skewed male/female ratio. Populations regularly have fewer males than females, but why? A combination of factors contributes to higher male mortality:

Our western ungulate populations (think deer, elk, moose, antelope) utilize a polygamous breeding strategy where males compete for and likely breed multiple females. This stresses the body condition of males who must travel to find breeding females and then defend them as part of the rutting process. Poorer body condition going into the winter months can increase male mortality.

Males also tend to be more solitary during a major portion of the year, which may also leave them more vulnerable to predation.

Finally, a major cause of male mortality is harvest by hunters. Hunting most often targets males because they produce the antlers and horns we are all fascinated with.

So how does the population survive hunting males each year? 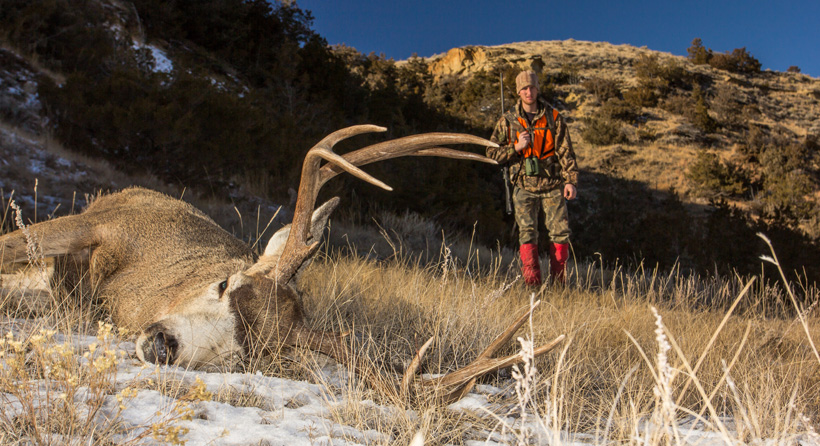 Since ungulates typically operate under a polygamous breeding strategy, it’s possible that hunters can harvest a certain numbers of males within a population without negatively impacting it. Think of it like this, studies suggest that about 15 bucks for every 100 does in a population is sufficient to ensure that almost every breeding female will be successfully bred. Any buck above and beyond that 15:100 ratio is, in essence, surplus and could be harvested. In fact, if an agency is trying to increase a population they may utilize a management strategy that maintains a male/female ratio in that optimal range where all females are being successfully bred and excess males are removed. This frees up resources (food, water, space) for the new fawn crop, 50% of which will be females who can reproduce for years to come.

Management of male/females and trophy potential

That brings the conversation around to management of male/females and how that relates to hunting opportunity and trophy potential. I won’t dive deep into every state's management strategy for multiple species but will give you an idea of the general strategies utilized and what that might mean for you.

Let’s look at Utah’s deer management as an example. From this example, you can extrapolate out into the states/units/species that you may be interested in exploring. Most states manage hunting on individual units/areas to achieve their population and herd composition objectives and most states utilize very similar strategies.

Premium units consist of the top tier units that many have most likely already heard of: the Henry Mountains and the Paunsaugunt. These two units are managed for a three-year average of 40 to 50 bucks per 100 does with 40% to 55% of the harvested deer being five years of age or older. In order to maintain these types of buck/doe ratios and older age class of bucks, Utah must significantly limit the number of permits.

The state also offers limited entry “management buck” permits for these units where hunters are restricted to only harvesting a buck with three points or less on at least one side. This keeps the buck to doe ratio within desired ranges and still retains some of those upper trophy class caliber bucks available to lucky Premium permit holders. Spike elk hunting on limited entry units essentially achieves the same thing. As you might imagine, the Premium permits are incredibly tough to draw and this is generally the association that exists throughout the west for all species and hunts; high male to female ratios equals a more varied age class of males (i.e. trophy potential) and potentially tougher draw odds.

The next tier of units are the Limited Entry Units. Examples include the Book Cliffs (north, south), West Desert Vernon or Fillmore Oak Creek. These types of units are managed for three-year average postseason buck to doe ratio objective ranging from 25 to 35 bucks per 100 does. Again, these limited permits are hard to draw, but have much better odds that the Premium Limited Entry. The male/female ratio is higher, yielding a hunter the opportunity to see more bucks/bulls and likely a more varied age class (i.e. possibility for older buck).

Next, are the General Season Units. Although you must still apply and draw one of these permits, they are more widely available and draw odds are usually better. A lot of western states have over-the-counter (OTC) permits for bull elk as well as buck mule deer and antelope. All of these types of hunts have similar management objectives for male/females. The bulk of Utah’s deer units are General Season and are managed for a buck/doe ratio of either 15 to 18:100 or 18 to 20:100, depending on the unit. Without going into every unit out there, I would suggest that across the west most general season units are in that management range. Now, it’s important to note that just because the management for any given unit is intended to be 18-20:100 does not necessarily mean that it is. Some units just have higher male/female ratios.

Let me give you an example: the Zion General Season Deer Unit in southern Utah is historically over objective every year for buck/doe ratio. This is likely due to the amount of private lands that exist over the majority of the herd’s summer and transitional range. Private lands limit public hunting and harvest, which leads to a higher buck/doe ratio. We can draw some conclusions from this information and, when applying it across multiple states and units, the following trend seems to hold true. Limited access, either due to private land ownership, limited primitive weapon only units or rough, less accessible country equals units with less hunting pressure, less harvest and higher buck to doe ratios. Typically, units that have larger amounts of roadless/wilderness type terrain regularly have higher male/female ratios. Higher male to female ratios give a hunter more chances to see buck/bulls and potentially a better opportunity to harvest a big mature trophy caliber animal. We only have to look at the male/female ratios of the most sought-after units/permits in the West to see that high male/female ratios produce trophy animals.

Their use in-state application strategies 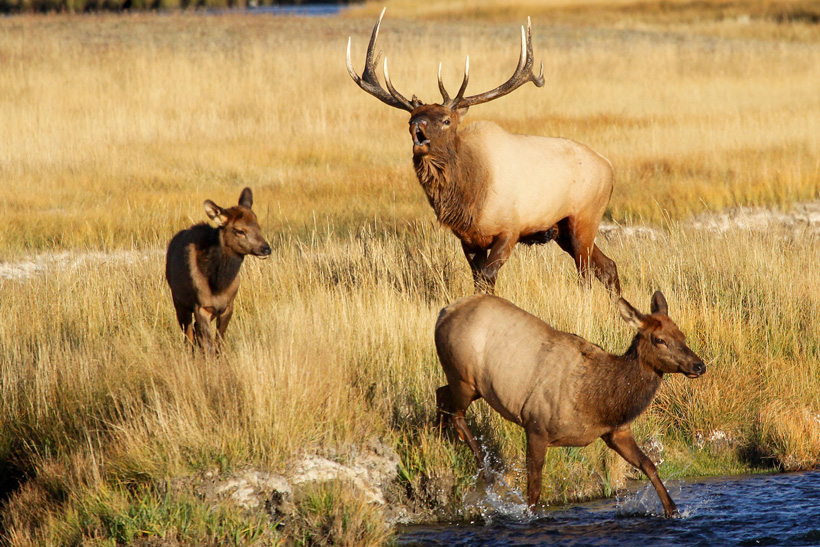 Limited entry units have higher male/female ratios. The higher the ratio, likely the more demand there is for a permit. Building points in these types of units is great, but do not overlook some very good easier hunt options. Review male/female ratios for every unit/hunt that you are interested in applying for. Higher male/female ratios equal more opportunities to see bucks/bulls and likely more potential for a trophy animal.

Focus research on general season, OTC, or easier draw permits/units with higher male/female ratios and try to determine what the limiting factor is. If it’s private lands, can you make landowner contacts and obtain permission to hunt? If it’s landlocked lands, can landownership maps or GPS tools help you access it? If the terrain is roadless/wilderness or tough to access, can you use packing animals, backpack, airdrop or drop camp outfitters to access those areas? If the units are primitive weapon only, can you pick up a bow or muzzleloader and become proficient with that weapon? Talk to your local biologists about the units you are interested in. Ask them what the male/female ratios are and if there is a trend.

A few other factors that may be of interest: higher bull/cow ratios are likely to produce more rutting activity as bulls will have to fight for breeding opportunities. The same holds true for mule deer. If you are looking for a good bowhunt hunt with screaming bull elk and an opportunity to call in bulls then you should consider the bull/cow ratio. If you are looking for a late season mule deer hunt where you are most likely to see many rutting bucks, consider the buck/doe ratio. Also, high male/female ratios can yield lots of broken up antlers post rut. If that is an issue for you, consider hunts that are earlier or even units that have less breeding competition.

Overall, there is a lot of information that can be gained and used in your application strategy and hunts, so take the time to review it and look for hunts with high ratios.