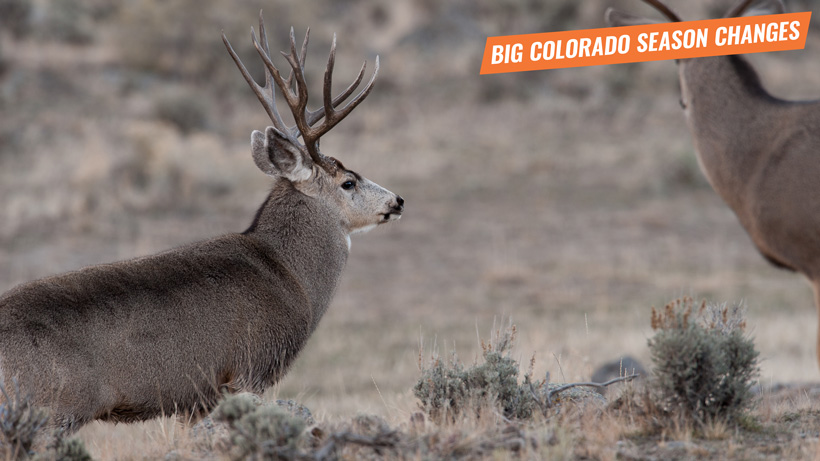 Note: This article has been updated to show to finalized 2020-2024 season structure. The previous version had the proposed dates before the final commission meeting. Old information has been crossed out to avoid confusion and to provide context. The final approved 2020-2024 big game season structure document can be found here.

Colorado Parks and Wildlife (CPW) has made some potentially big changes to hunting season structures for elk and deer for 2020 through 2024 during their annual 5-year big game season structure process. CPW, "carefully considered all the input received from the Big Game Season Structure (BGSS) public meetings, telephone town halls, focus groups and two public comment forms to inform these recommendations. Through this process we heard from several thousand hunters, both resident and non-residents. We greatly appreciate your time and engagement in helping us inform the next Big Game Season Structure."

These new season structures might impact how you apply in the coming years and definitely has a chance to impact draw odds as certain seasons could now become more coveted. In the tables below, you will find the historical and new season structure dates.​

These are the pretty much the final recommendations and are mostly set in stone, but could potentially change when they hit the commission meeting on July 18 in Telluride. The commission could change these dates, but usually, they don't, as this process has already gone through a lengthy process and the main public comment period deadline of July 3 is already over. You can see the meeting minutes for July 18 here. It should be noted that additional comments received from July 3 and noon on July 15, will be provided to the Commission two business days before the meeting. You can submit your comments before the July 18 meeting at the email address here: dnr_cpwcommission@state.co.us

So with that said... the dates presented below are still tentative dates.

The information below does not include the plains hunts. I left those off due to the amount of private land.

Dates presented below are finalized.

Previously the season was 30 days long and always opened on the last Saturday in August. Also, this new structure now creates a rotating opening date. These new season dates could mean for a better elk hunt, but they could have an impact on the chances of a velvet mule deer.

There is no season structure change for the 2020 through 2024 seasons. Muzzleloader season opens on the second Saturday of September and runs for a total of 9 days.

The 1st season regular rifle elk hunt is still a 5-day season, but new starting in 2020, the gap between the 1st season and 2nd season hunts will now be a 9-day break. The old break between 1st and 2nd season was two days. The starting date will continue to open on the first Saturday after October 9. According to CPW, antlerless elk licenses may be offered in DAUs over the population objective.

The 2nd season rifle hunt will continue to be a 9-day season, followed by a 5-day break which is the same as the old system. The season will open on a Saturday and includes two full weekends.

These season dates are now later than ever before!

3rd season rifle hunts saw some big changes. The 3rd rifle season hunt now has a 7-day season, followed by a 4-day break. Note: For 2020 through 2024, 3rd season will now close on a Friday.

The old system was a 9-day season followed by a 2-day break. Also, third season dates are now pushed later into November increasing the chance for cold weather and snow.

Note: The season dates are now pushed later into November, making the seasons open during Thanksgiving.

A link to the official 2020-2026 Big Game Season Structure can be found here if you want to take a look at other species season dates.