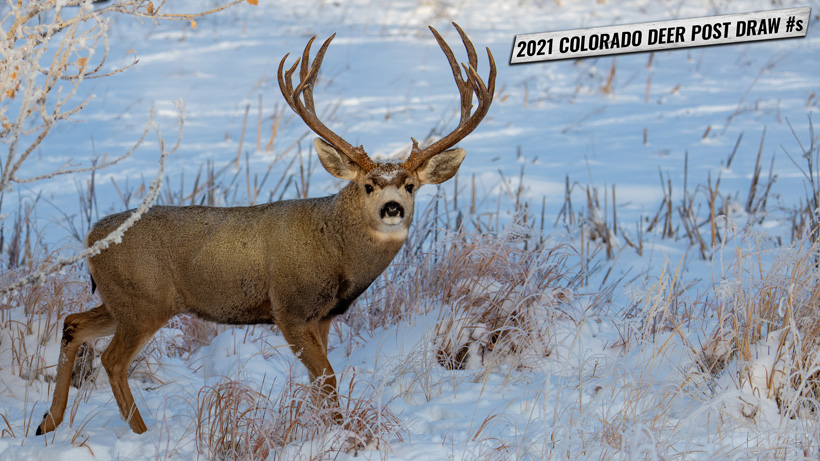 Well, we are finally here…the Colorado draw is over! Some of us were excited to check our emails that fateful morning; others were left with a sour taste in their mouth. As if the big C-word (creep) hasn’t been enough to deal with, now hunters are seeing massive increases in the number of applications received in the West each year. A simple fact that is as nerve-wracking as it is comforting. On one hand, we are definitely increasing the interest in a minority activity, but, on the other hand, we are doing so at the cost of lower draw odds for many opportunities.

Many western states have reported a large increase in applicants for 2021 and Colorado, the subject of our article, boasted an impressive increase of nearly 75,000 people. That’s a massive increase over previous years! Combine the increased applicant numbers with season dates of a lifetime and it’s easy to see that the 2021 Colorado draw had the potential to be a total blood bath. Think point creep on crystal meth.

Going into the current draw, many questions were flying around the office: Do you try for a second season rifle? Is a fourth rifle tag even worth it? What's going to happen with the odds in the third season? And, on top of that, are units going to see point creep and, if so, how much?

In the following sections, we are going to take a look at some of the real numbers from the 2021 draw and see exactly how the most anticipated draw of 2021 played out.

What is fueling this perfect storm?

I touched a bit on this above; however, before really diving into the numbers, I wanted to provide some context to the current predicament we are in.

In 2019, Colorado Parks and Wildlife (CPW) a new big game season structure that would push most deer seasons much later into the year. With the arrival of the 2021 season, we are seeing some phenomenal dates:

The second rifle season — typically a tough hunt for timbered up pre-rut bucks — will now be on the leading edges of the rut and the third rifle season is going to land smack dab in the middle of the rut. Fourth rifle tags will still be desirable, but many of the mature bucks for any given unit will have had incredibly high odds of being killed before the fourth season even begins. The next three years could lead to some exceptional hunting across many units; however, the crop of mature bucks — and the average age class — will surely deflate soon. Many people are starting to see the looming outcome of the trophy quality in Colorado and points are flowing.

For 2021, you could surely anticipate hunters burning insane amounts of points to simply grab a tag as well as the required point levels for certain tags to hop all over the place.

Further, Colorado is a state that allows applicants to simply apply for a point each year. The pool of “point only” applicants continues to grow and, honestly, is becoming one of the biggest variables. The biggest question with this group is where will they apply? With so many people eager to cash in on points in 2021, it was impossible to predict where this edge group could focus their efforts.

So, enough talking about the “what-ifs.” What actually happened? Below, we are going to jump into a handful of popular hunts for the second, third and fourth rifle seasons — the three seasons most affected by the application bumps. To provide some transparency and relative qualities, we will also be considering hunts from several point levels to see where the interest was pointed in 2021.

For the 2021 season, it is of the opinion of many people that the second rifle season would be the big gamble for a number of reasons. With the exceptional dates on-deck for this season, it was no surprise to see hunters really starting to take a look at the second season. This season could very easily see the beginnings of the rut and a little bit of inclement weather could make for an exceptional hunt. However, it is also not uncommon to see exceptionally warm temperatures during this timeframe, which can make the hunting understandably difficult.

The third season dates will certainly fall during the rut, which is a very attractive use of points; however if the second season sees favorable hunting conditions, there will be a large number of mature bucks in a given area killed.

In all, some good bumps were seen across the board for the second seasons with many hunts. Residents saw mainly minimal changes with most units jumping around one point, which is normal movement although nonresidents saw many units jump from one to five points for the required level to draw.

The third rifle seasons in Colorado have always been a fan favorite. Historically, hunters could find exceptional hunting opportunities on a number of units that could be drawn with minimal points. These were the type of hunts you could partake in often. For 2021, the season dates of the third season are about as sweet as could be and many hunters had their eyes on these seasons.

As with the second seasons, residents saw small increases to the number of points needed to draw a tag; however, nonresidents really got hammered with most units jumping between one and five points. Anyone holding a third season tag this year could see some incredible hunting conditions and if favorable weather conditions (snow and cold temperatures) are present during the second season, it is possible that a good number of mature bucks will be killed off prior to the start of the hunt.

The fourth season hunts were where some of the biggest uncertainties were lying this year. Typically, these seasons have always been some of the most sought after and many hunters did still apply for these. Out of the three rifle season options, the fourth season definitely saw the smallest amount of change in terms of points required to draw, but there were still certainly some upsets and surprises.

What about the second choice hunts?

While looking through the data, I was initially primarily focused on the more prolific and popular units. But what about the easy to draw hunts? In 2020, there were 21 hunts between the second, third and fourth rifle seasons that saw 100% odds as a second choice for nonresidents. Typically, there is a reason these tags would be available as a second choice; however, with the season dates this year, most hunts during the second or third season will be a good one.


*Based on nonresident applicants
**No first choice applicants

So, what's the conclusion and what are the prospects?

From the sampling of hunts above, we can make a few conclusive…conclusions. Applicant numbers definitely increased a lot with much of the focus centered around the second and third rifle seasons. Along with that, there is now a large chunk of expecting applicants without tags. What will these applicants do next year? Will we see another jump in draw odds? Additionally, what are these applicants going to do this year? Remember: we still have the Idaho, Arizona and Wyoming deer draws left to go and those soured by Colorado may very well be looking at backup options.

In all, Colorado did exactly what many of us were expecting it to do; we just have a clearer picture now. Fortunately, hunters will likely have a better grasp on the state of things for the 2022 draw, but the landscape is definitely changing.

Stay tuned as more information and reports are released. We will be covering more on this as the year moves along.