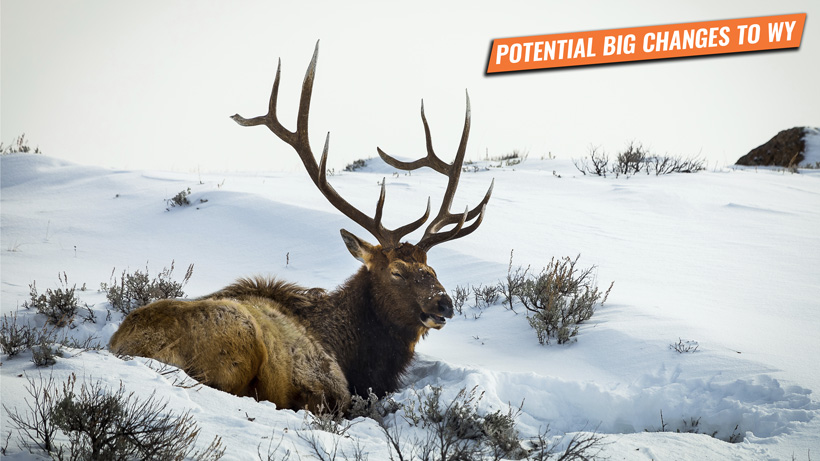 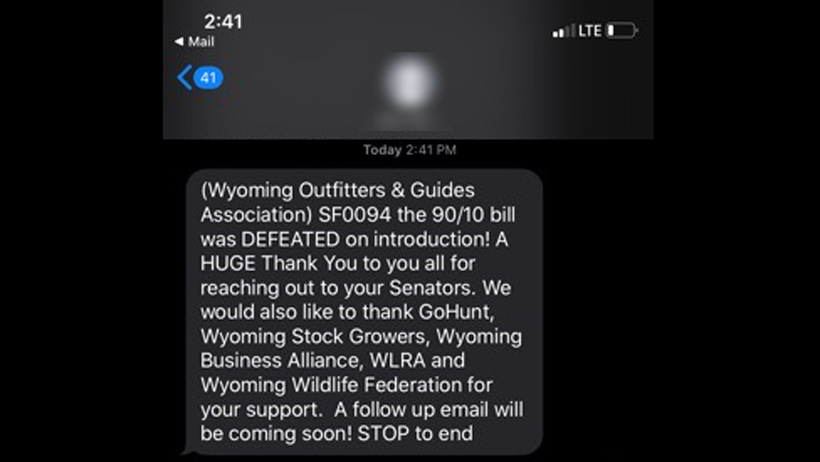 Early this morning I received an email from the Wyoming Outfitters & Guides Association (WOGA) mentioning a new bill that was introduced yesterday, Feb. 10. This bill was introduced by Senator Hicks that will severely impact all nonresident hunters in the state of Wyoming! The bill in question is SF0094.

Note: the Wyoming Outfitters & Guides Association are against this bill. 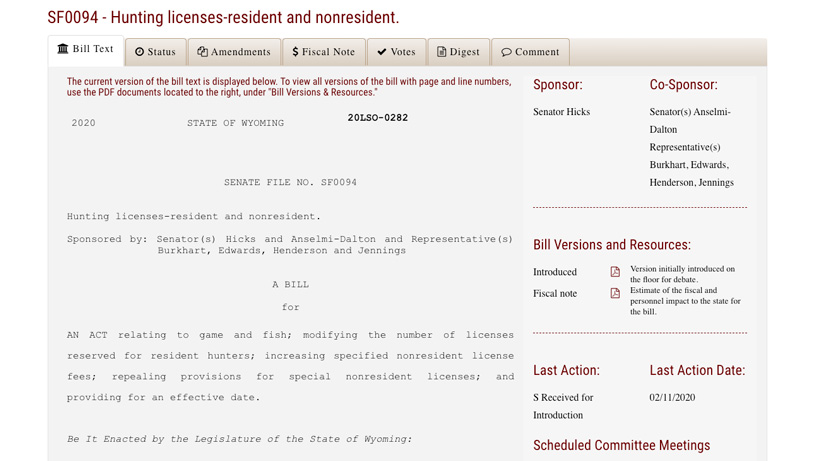 "AN ACT relating to game and fish; modifying the number of licenses reserved for resident hunters; increasing specified nonresident license fees; repealing provisions for special nonresident licenses; and providing for an effective date."

It is also worth mentioning that Wyoming recently had a license and preference point fee increase in 2018. You can read that article here.

Contact these five Senators who are on the Travel, Recreation, Wildlife and Cultural Resources Committee. These people directly have the power to impact hunting in Wyoming.

What are your thoughts? If passed, we could see these changes being implemented on January 1, 2022. As stated at the beginning of this article, in that email I received this morning, the Wyoming Outfitters & Guides Association are strongly opposed to this bill!

We reached out for comments, and below are two pieces of information from Sy Gilliland, President of the Wyoming Outfitters & Guides Association and Jess Johnson, Advocacy and Legislative Liaison, Wyoming Wildlife Federation.

"This bill is bad for Wildlife management as it takes away the commissions' authority to set license quotas for Elk, Deer and Antelope. Sheep, Moose, Bison and Mtn Goat are currently set in state statute. The reason this is so important is wildlife populations fluctuate and the Game and Fish needs to be able to adjust quotas as needed in order to remain fiscally sound and manage our herds. Currently, the Wyoming resident receives or buys roughly 80% of the big game licenses and funds 20% of the department license fees. Nonresident hunters receive approximately 20% of the licenses and provide 80% of the department's license fee funding. This is a great model and both resident and nonresident sportsmen benefit. The resident has incredible opportunities to hunt big game and in fact Wyoming only has 70,000 residents hunting big game or 12% of our states population. Wyoming does not have enough big game hunters to harvest the amount of wildlife that’s needed to be harvested annually. In fact right at 40% of the resident hunters only buy one big game license per year. So Wyoming has to rely on nonresidents not only to fund our department but also harvest the amount of game needed each year. To be fair, the vast majority of resident hunters support nonresident hunters and realize the vast economic contributions they make to our department and tourism economy. It’s really limited to a very few malcontents that don’t want non residents competing with them in the field.

To be crystal clear the members of WYOGA at no time were ever consulted by Senator Hicks about this bill or the 30% outfitter set aside. I am sure Senator Hicks thought offering a license set aside for Outfitters would garner outfitter support. By cutting nonresident hunting licenses by half, then offering 30% of half as a carrot to get our support, Senator Hicks demonstrated how little regard he has for the huge contributions to Wyoming's economy made by nonresident sportsman. The members of WYOGA do not support any aspect of SF94 including the license set aside.

I encourage our nonresident sportsmen to have their voices heard and email the state Senators listed on the TRW committee."

"This 90/10 bill...while it looks on the surface to benefit residents (it does only a minuscule amount- see fact sheet) ultimately it is an economic hit for Wyoming communities that rely on nonresident dollars in shoulder seasons (Think Cody, Jackson, and other tourism-dependent counties).  To offset the balloon effect that less nonresident fees would cost the game and fish budget we are left with the option to either hike resident fees (a nonstarter in the Wyoming legislature) or to hike an already pricey non- resident fee which we have no way of predicting where the ceiling is for folks who will just find this too expensive to hunt in our state at all. Wyoming Wildlife Federation (WWF) is worried about the overall negative effect on hunter recruitment, especially in the instance of our young folks who leave home for and after college and wish to still hunt this amazing state as a nonresident. We are also concerned about economic dollars to communities, small businesses and outfitters. Hunting is a huge part of our state and we want to keep it as an accessible and high quality of a hunt as our stats allow."

This bill changes the current framework of license allocation from approximately 84% of big game licenses going to resident hunters and 16-20% to nonresidents to 90% of big game, bison, and grizzly bear licenses being reserved for resident hunters. Additionally, it bars any unit with less than 10 licenses available from issuing nonresident licenses and raises nonresident license and application fees significantly, making Wyoming the most expensive place to hunt antelope, bison, moose, and mountain goats, and second most expensive place to hunt deer, bighorn sheep, and elk for nonresidents.

WHY you should oppose this bill:

A 90/10 license allocation split is going to cost Wyoming residents and the state.

It does not increase hunting opportunity enough to justify the costs. Large applicant pools, not limited licenses, are responsible for low drawing odds.