The top opportunities for whitetail deer in the West 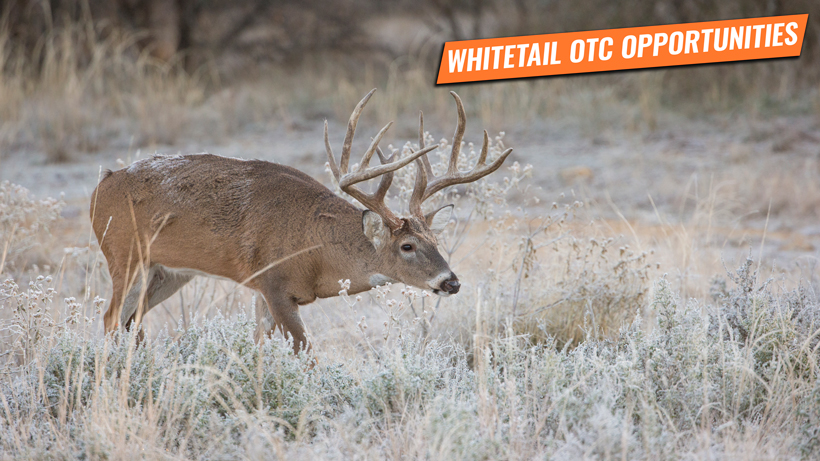 When most people — even western residents — dream of deer adventures, their thoughts generally travel toward chasing early season mule deer in high alpine basins or rutting mule deer on sage-covered ridges. Personally, I also place myself into this same category even though one of the most abundant and often overlooked opportunities to be had is over-the-counter (OTC) and easy to draw tags for whitetail deer.

Whitetail deer can live in almost every environment known to man and tend to have an extremely dense population no matter the habitat. Bucks can grow impressive antlers with minimal nutrient intake compared to their mule deer counterpart and offer their own set of unique hunting challenges. Opportunities are abundant for whitetail and, in the following section, we will take a look at some of the best states to consider for your next whitetail adventure.

While whitetails do not typically inhabit the same awe-inspiring country that mule deer do they can still provide memories to last a lifetime.

Colorado features a healthy population of whitetail deer in the eastern half of the state. Decent whitetail numbers can be found along the western half of the state at times; however, these will be isolated in small pockets and less productive when targeting the species specifically. The state offers OTC tag options for rifle hunters in a handful of units located in the south-central portion of the state. Many tags — for multiple weapon types — are available across the entirety of the eastern portion with 100% draw odds for the bulk of them.

Most of the hunting is marginal in the OTC units, but with the draw odds for the plains units, I felt it important to include Colorado in our list regardless. While these are not a true OTC tag, many of them can be drawn yearly and are worth noting.

As you can see in the above list, most of these units may not have much public land, but they do have great trophy potential. A lot of these units are comprised of agricultural developments that provide excellent feed options for whitetails. Hunting can be done on public lands; however, securing private access can increase your odds of success on mature bucks.

Idaho is a state of great opportunity — whether it’s for whitetail deer or anything else. Some incredible whitetail bucks have been killed here from the northern edge on the Canadian border all the way down through the high desert country of southern Idaho. The central and panhandle regions of the state have historically produced the largest bucks; however, hunting conditions can be tough here due to dense undergrowth. In this part of the state, bucks can grow and die of old age. The state allows hunters to hunt whitetails through the entire course of the rut in most units on a general tag, which can make for some exciting times afield.

Idaho is not a choose your weapon state, meaning simply purchasing a general tag will allow hunters to hunt during all weapon-specific seasons providing they have the required stamps and certifications. Obviously, most hunters traveling from out-of-state will generally opt for the firearm season because of its higher odds of success, but some units do allow for great muzzleloader opportunity as well.

Most of the units on the above list have an excellent distribution of public access options. Many resident hunters in Idaho simply use their tag as a means for filling the freezer so the general five point percentage for reported whitetail bucks tends to be lower than expected. It will take some serious effort and time, but some incredible bucks can be found on public land throughout the state.

Whitetail deer inhabit nearly all of Montana and thrive in each of the habitat zones found there. Hunters will find a wide array of terrain types to chase deer in from the mountainous regions in the west to the sprawling prairie lands in the central and eastern portions of the state. The general tag allows tag holders to hunt nearly every unit in the state and includes access to both the archery and firearm seasons. What’s more, the general tag also allows hunters to hunt throughout the entirety of the rut.

The general tag has to be drawn by nonresidents either through the big game combo tag or the deer combo tag. As of now, it’s requiring about one to two preference points for good odds; however, with some research, the wait can be worth it.

Montana Fish, Wildlife and Parks does not differentiate hunter numbers between mule deer and whitetail deer. Because of this, determining species-specific harvest success is impossible. While looking at Montana deer, consider the number of whitetails harvested and the 4 point or better percentages.

When looking at the above list, it’s pretty obvious that a huge portion of these units have great public land distribution. The best whitetail hunting will almost always be found on private agricultural lands; however, keep in mind that whitetail can and will live anywhere. With some research, hunters can be in a great position to take some incredible bucks every year in Montana.

Like Idaho, Washington is a state that generally appears pretty lackluster on paper. Harvest success rates are generally low and four-point percentages are even lower. Most of the harvest is comprised of local hunters who are simply hunting to fill a freezer. The average age class for bucks is generally lower, but the northeast corner of the state can — and has — grown some giants. Here, the country and terrain can be densely forested and bucks can die from old age.

Washington is a choose-your-weapon state and hunters will be tied to one weapon type for the duration of the season. When selecting your weapon of choice, it will be important to take this into careful consideration. If you're looking to hunt Washington for whitetails, spend some time on Filtering 2.0 to weigh your options.

Wyoming offers some excellent whitetail hunting opportunities for those willing to put in the time. The best hunting options will generally be found on private lands, but savvy hunters can find plenty of opportunity on public lands, too. Whitetail inhabit a wide array of terrain types in Wyoming although the best hunting conditions and highest densities of deer are typically found in the eastern half of the state.

General tags for whitetails must be drawn and are region specific. Each region consists of a collection of units where the tag is valid. Most of the more prolific whitetail regions can generally be drawn with one to two preference points and some are available at zero points. With the correct stamps, hunters are allowed to hunt both the archery and rifle seasons on the same tag. Additionally, hunters also have options for draw unit specific limited quota licenses as well — most of which are also available with little to no points.

When breaking down the units in Wyoming, you will notice that most of the highest odds for success were produced during the limited quota hunts. These can generally be drawn with about the same effort as a general tag, but are, for the most part, limited to one hunting unit. When applying, hunters will need to balance the flexibility of a region-wide tag against the probability of better odds on an area specific tag.

With thorough research, good hunting opportunities can be had in any of the states listed above. When considering the probability of mature deer, ease of locating deer, and overall enjoyment of the hunt, you are probably best off considering either Colorado, Montana, or Wyoming. Idaho can produce some absolutely jaw-dropping bucks, but the steps required to harvest one can be mentally draining and require many years of dedication. Washington provides some good opportunities, but with heavy hitters like Idaho and Montana in close proximity, it can be a hard sell.