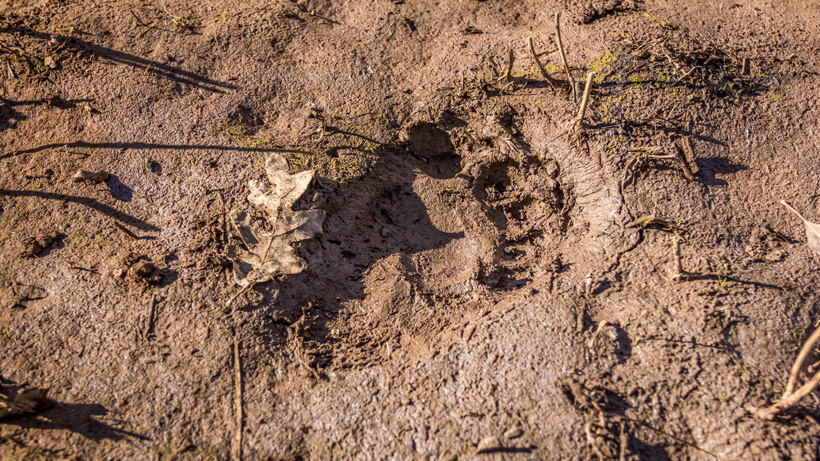 What is the first animal that you think of hunting when someone brings up Arizona? Most would probably answer with elk, mule deer, or our precious Coues deer. Each one of these species holds a special place in my heart for hunting in Arizona. We are blessed to have such areas as the Arizona Strip (Units 13A and 13B) for mule deer, Mogollon Rim for elk, and various sky islands in the southern part of our state that hold an abundance of Coues deer. Yet, there is another animal that provides a fantastic opportunity in my great state. What is it? The black bear. 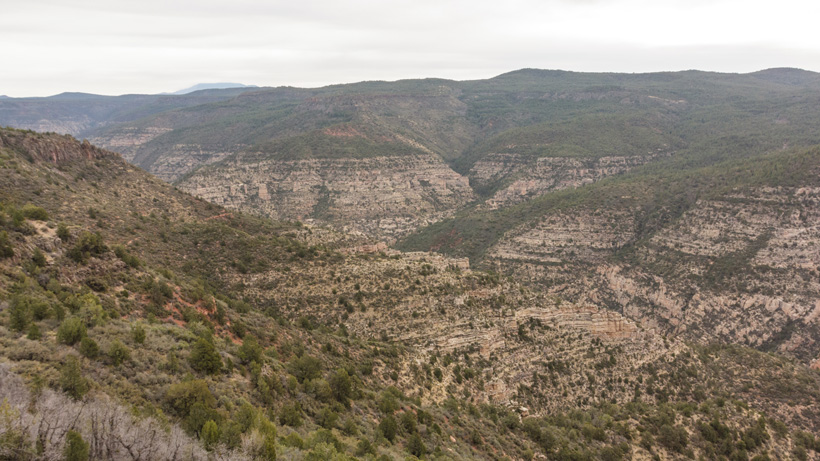 Black bear hunting in Arizona presents a pretty unique opportunity. Here you will not be sitting in a ground blind or treestand over bait like typical bear hunting. Instead, you’ll be glassing our desert for these bears as they roam the canyon systems and hillsides while they feed. Yes, I said desert. Depending on our annual rainfall, Arizona bears have been known to travel up to 100 miles in search of food. This will cause them to migrate from their higher elevation homes down into our hot deserts. During certain times of the year, normally between August and October, these bears can often be observed right out in the open feeding on prickly pear cactus fruit. In fact, it isn't uncommon to see a black dot from miles away on the desert floor with your naked eye. Tell me one other place where you can do that. 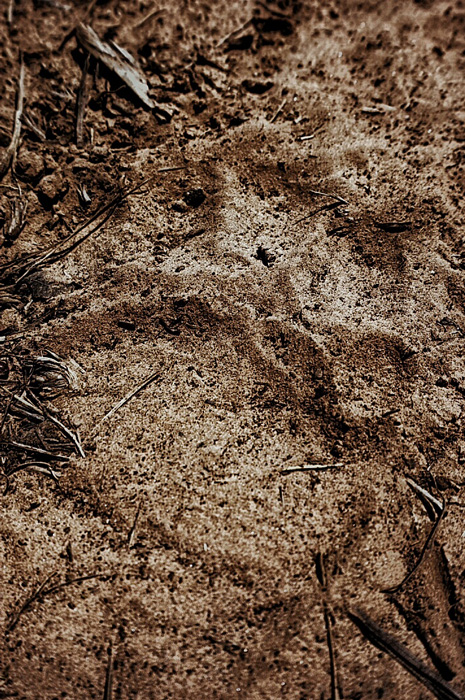 Arizona offers a few different bear seasons with varying opportunity. Most of the seasons are over-the-counter (OTC), with the first being the spring hunt landing in late March and running through early May. The second season is the archery spring tag. This tag is only available through a draw in select areas and runs from early May through the end of July. If you are lucky enough to draw a tag, you will probably have the mountains and the bears to yourself during this time. I had this tag earlier in the year and didn't see one other hunter—even through my binoculars. This is an extremely difficult hunt, but gives you the opportunity to hunt these bears during the rut, which is in early July in Arizona.

While there are a few different seasons, the most popular time for bear hunting is the fall. The first of our fall hunts start in early August and end somewhere in the middle of the month. The next season opens toward the end of August and runs through the first week of September. After that, the season will open back up at the end of September/beginning of October and run through the end of the year. Each one of these seasons operate on a sow quota. Once the quota for a unit is met, the season will close the following Wednesday at sundown. Some units close the first week, some never close the entire year. The past two years, my favorite bear unit never closed down. Had I not harvested a bear, I could have gone after these bruins until Dec. 31. That's what I mean about having a lot of bear hunting opportunity in Arizona. Hunters are responsible for calling 1-800-970-BEAR (2327) before hunting to determine if their desired unit is still open. 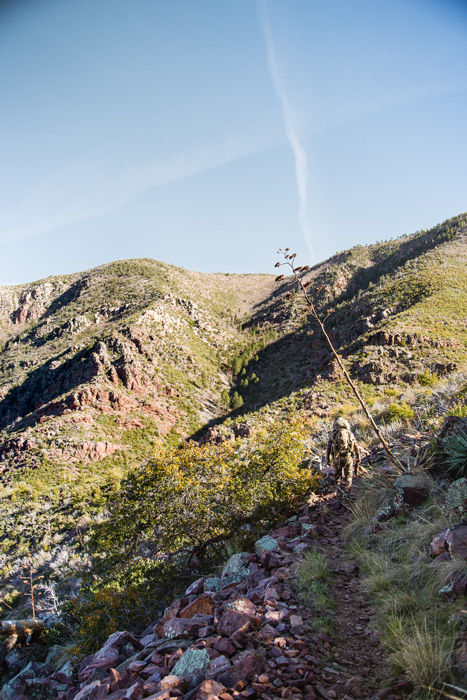 I believe the reason Arizona offers these liberal black bear seasons is not necessarily because of our numbers. While we have a healthy population of bears, it’s not like our northern friends. In my opinion, the reason is due to the difficulty that this hunt offers. If you somehow harvest a bear in Arizona on a regular basis, then congratulations. That is no easy task and I commend you for it. It took me three years to find an area that I am confident in hunting. Along the way I found myself traversing through some of the most rugged country we have. It is nothing short of an adventure with Arizona bear hunting. 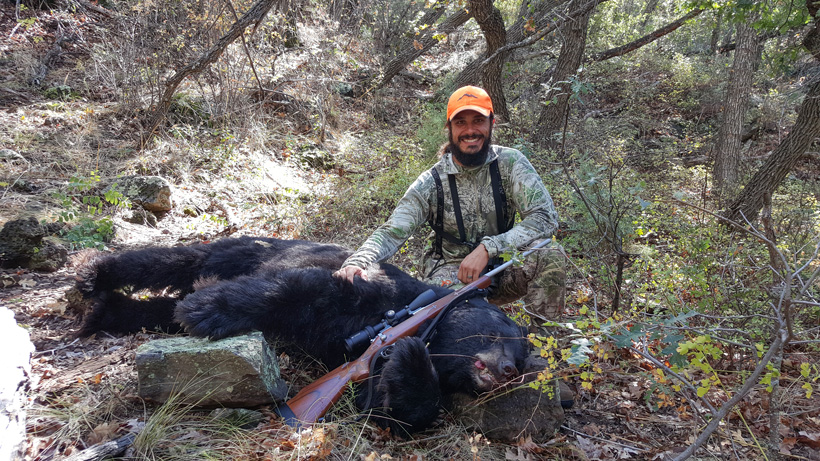 The word adventure makes me think of my first Arizona black bear harvest. I had finally found a canyon that had regular bear activity and was filled with food and water for them. On the morning that I shot my bear, we had already spotted nine bears—all within 300 yards of each other. Each bear was a slightly different color than the last and their sizes varied from cub to stud! After I shot my bear, a sow and cub actually trailed my bear to its resting place. This had me worried. The last thing I wanted to do was go to recover my bear and walk up on a protective sow with her cub, not to mention the other six bears roaming the area. Just getting to where my bear was would prove to be an adventure. 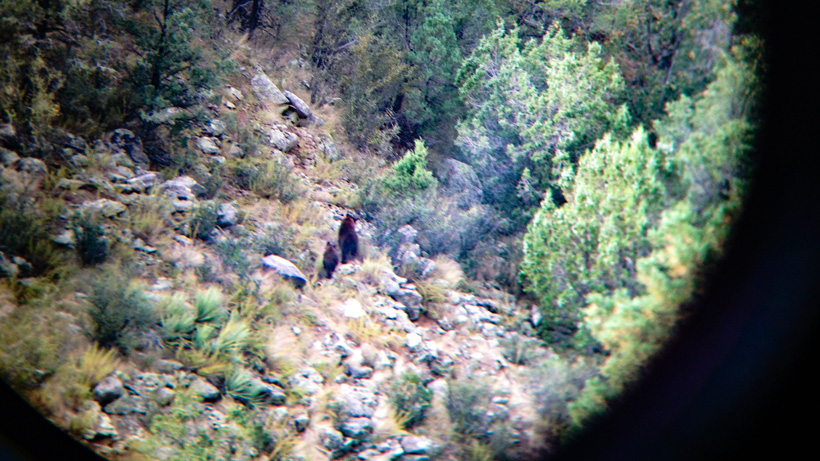 Digiscope footage of the sow and cub.

I shot my bear from 200 yards away. It took us three hours to get to it. That is Arizona bear country for you. Once we did get to my bear unscathed by the other “residents” in the canyon, we were faced with how in the world we were going to get back out of this hell hole. Going back the way we came was not an option. Carrying over 100 lbs on your back along a wet and mossy canyon bottom was just asking for a broken ankle. What did we decide to do? Head straight up the mountain and scale a rocky bluff, what else? This involved us leapfrogging our equipment and my bear piece by piece all the way up the bluff. It wasn't my smartest moment, but one that I will never forget. We arrived back at the truck just as the sun was going down. It was a memorable adventure from beginning to end. 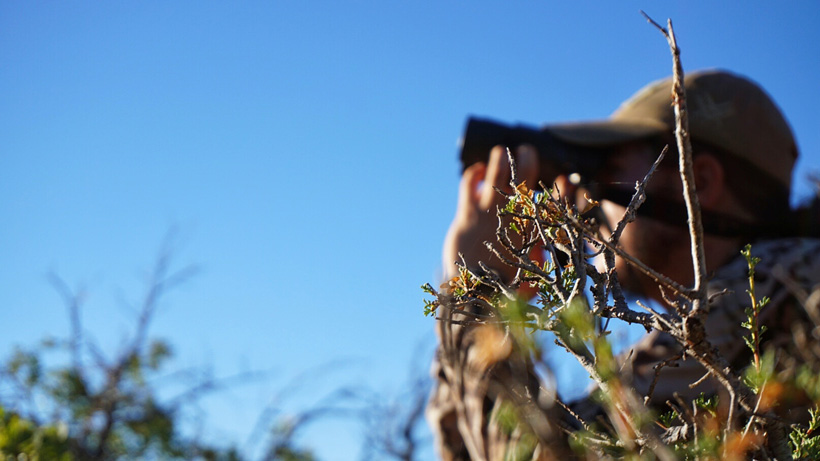 A fellow bear hunter once told me a story of a gentleman he had the privilege of meeting in the field during one of our August bear seasons. He said that the man had been hunting bears every year for five years and had never even laid eyes on a bear. After some conversation, my friend then pointed out three different bears to the gentleman and right from the road to boot! The man was amazed and couldn't believe that, just like that, he was looking at not one, not two, but three different bears.

The moral of all of this is that bear hunting in Arizona can definitely be a challenge. If you are willing to put in the work and most likely head into some areas that you really would rather not go, you can be successful. Bear hunting here really requires a lot of homework and time behind your optics. In my bear travels, I have found more good spots for hunting other animals than actually hunting bears. Every once in awhile, though, you find a gem. Once you do, don't let go, pat yourself on the back, and learn that area.

You can also check out a recent podcast episode where I talked with the guys from the Hunt Backcountry Podcast about the mental struggles of hunting the backcountry. You can listen to the episode below. 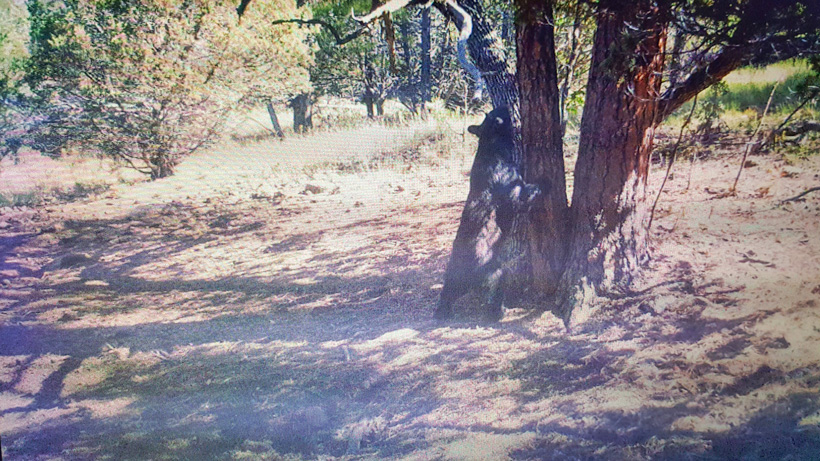 A great looking chocolate colored bear with a blonde back.

Because of the rugged country that our bears live in, they get a chance to get big! I would venture to say that there are plenty of bears here that have never seen a person. If a bear has everything they need in a certain drainage or canyon system, then they really have no reason to leave. All they have to do is be a bear and keep getting bigger. In my favorite bear hunting spot, I have never seen another human. That is probably because not many people are as dumb or as dedicated as I am to hunt this nasty country.

For the folks that do hunt bears regularly in Arizona, you know what type of country I’m speaking about: areas so thick that you get an upper body workout bending oak trees out of the way; hillsides so steep that you have to grab onto the trees and shrubs to pull yourself up. The bears love these areas because they are safe and secure. If you get down on your knees in these spots, sometimes you can actually see the "bear tunnels," as I call them. If you aren’t down there to see them, you would never know that these little paths exist. I assure you, they do, and the bears use them. This is how so many 20" bear skulls come out of Arizona.

Beyond the size of our bears, we also have some amazing color phases here. I have seen black, blonde, strawberry, cinnamon, and chocolate colored bears. Some of the bears are even a combination of both! Earlier this year, I saw a bear that was blonde with chocolate socks. Never before had I seen a bear like that. Unfortunately, he gave me the slip and I couldn't get an arrow in him. I don't know the reason behind all of our differently colored bears, but I'd guess it has something to do with our climate. We don't have a whole lot of rain forest type areas like up north. I hear up there, bears are mostly black—possibly because they live in a darker environment. Here, even though the bears prefer thicker areas, they are way more exposed to the sun and drier environment, including the desert. I think the coloring is possibly genetic and what helps them blend in better to our area. 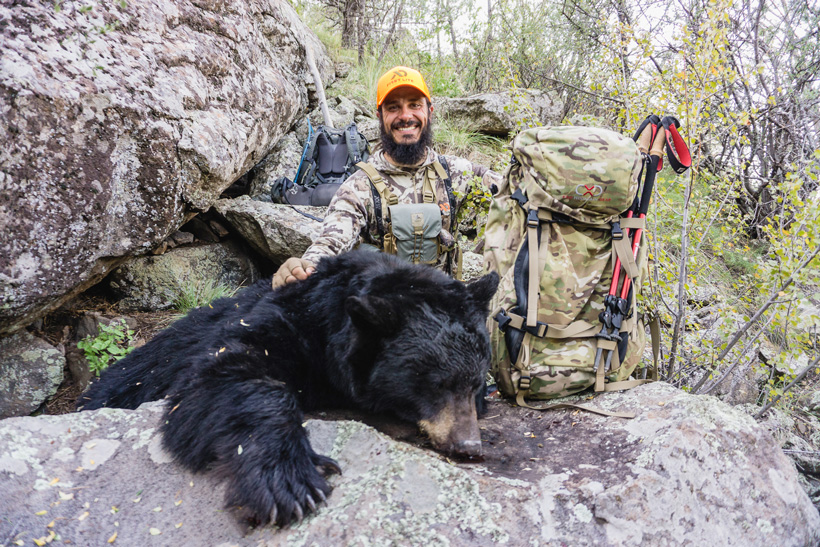 Bear hunting in Arizona, although difficult, offers a unique type of bear hunting that you can't find anywhere else. Between the climate they reside in, the vast array of colors, and trophy potential, there is surely adventure to be had within Arizona if one takes the time to have it.

That is last thing worth mentioning: time. Aside from a yearly season, I don't think someone could ask for more hunting opportunity thanks to the five potential seasons for bears here (four if you don't draw a spring tag). Besides the spring draw, our tags are general OTC tags. Grab your bow and call one into spitting distance or grab your rifle and shoot across the canyon. Whatever your method, it's one more reason to get off of the couch, lace up your boots, and head into Arizona's rugged backcountry. Get out there and write your own adventure.