Hunting in the western half of the country is unlike any other outdoor experience. The vast diversity of the landscape and abundance of public land speaks volumes to the hunter that is seeking the true western hunting adventure. Arizona offers exactly what this type of hunter is after — a unique hunting adventure across an ample amount of public land that creates unrivaled hunting opportunities for those in search of the animal of their dreams. Arizona boasts species like world class trophy elk, antelope, bighorn sheep, Coues deer and of course mule deer.

One of the main ways that Arizona is different from other states is because of the abundance of public land and landowner permits are not an option. Instead, the Arizona draw plays a major factor for most people. For the majority of hunts, you will need to put in an application in the big game drawing in order to go on a hunt that year. While residents are awarded a great percentage of the tags, nonresidents still have plenty of opportunity to get drawn depending on the hunt.

Bonus points are king... or are they?

In order to be eligible for a mule deer tag in the best units, you need to have the maximum amount of bonus points. Bonus points are awarded each year an applicant is not drawn or if an applicant decides to buy a point, forfeiting the option to be drawn that year. Additional points are awarded for having completed an Arizona hunter education course as well as achieving a loyalty point. A loyalty point is awarded for the continuous application of a certain species over five consecutive years. Nonresidents require the maximum amount of points for a premier mule deer hunt, which ranges from 10 to 20 points.

Essentially, it could take decades of applying to get drawn for a premier hunt for one of Arizona’s world class mule deer. These hunts include the Arizona strip (Units 13A or 13B) or Kaibab (Units 12A East, 12A West and 12B) for mule deer.

The bottom line — you may have to wait almost a quarter of your life to get a tag to go hunting in Arizona. This can deter people from ever applying for Arizona. My family and I have been residents of Arizona for our entire lives and have only had the opportunity to hunt these premier tags a few times. My own mother has not been drawn for elk in over 23 years! So you can trust me when I say I understand that this can be very discouraging to most — especially nonresidents.

Best hunt in the state? 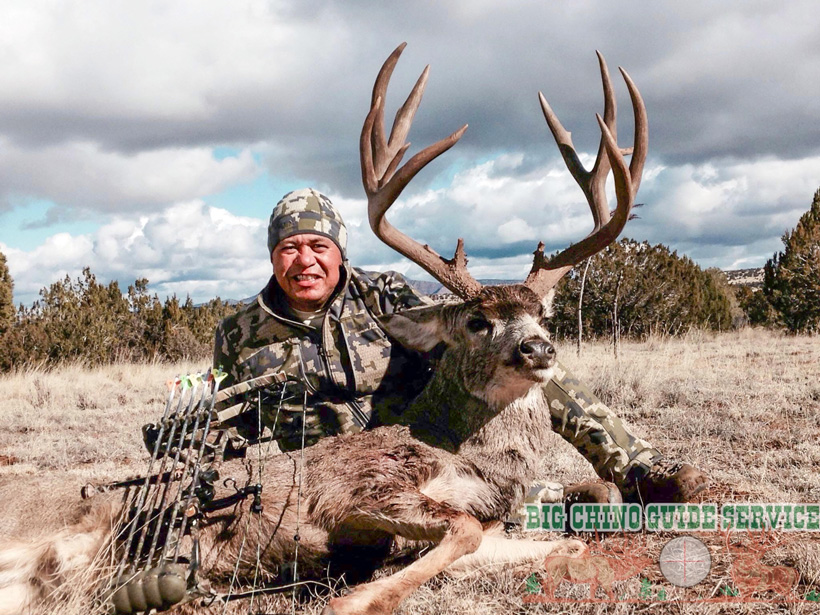 With that being said there is hope in sight. A hunt that has flown under the radar in Arizona for decades is now beginning to surface. Arizona offers over-the-counter (OTC) archery mule deer and Coues deer hunts during prime hunting times in prime hunting units. It has become one of the most overlooked and underrated hunts in the southwest. The best part about this OTC hunt is that there is no draw, no application and no waiting. Both residents and nonresidents can hunt. Just buy a license, buy a tag, and bring a bow.

This OTC hunt is offered three times a year. For the upcoming 2015-2016 season, the available dates are as follows:

A hunter is allowed to kill one antlered deer per calendar year. This means that your license and tag is good for all of the open seasons of that year. If you buy a tag in August and do not harvest a deer before the dates close in September, your license and tag will still be good for the open dates of December. If you shoot a deer during the August or September season you cannot harvest another deer until January 1 of the next year. If you kill a buck in January you will not be able to hunt or harvest another until January 1 of the following year. With the OTC license, you can hunt all over the state. Of course, the type of hunting you are going to encounter depends on the time of year you decide to hunt.

Please note that if you choose to hunt during the January open hunt dates, you will have to buy a new tag and hunting license since the new hunting season begins on January 1. 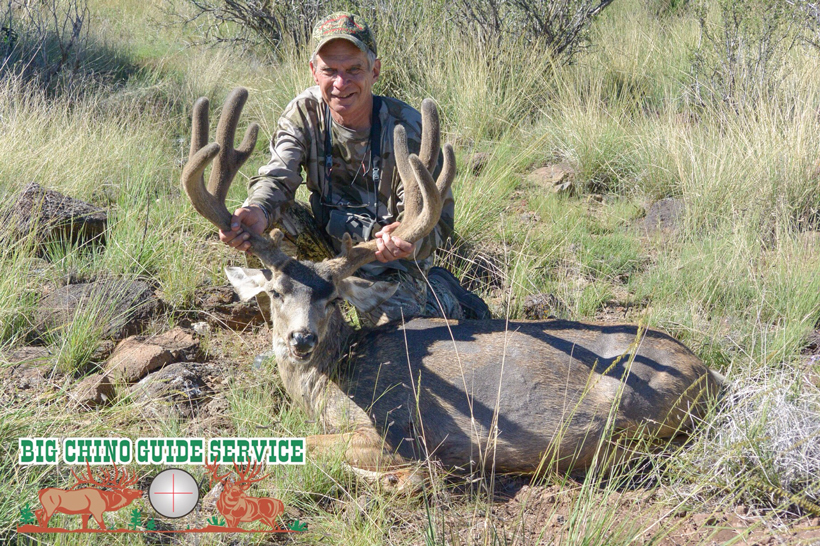 During August through September, you can expect the bucks to be in velvet and in bachelor groups. This part of the year, expect temperatures between the mid-70s up to over 100 degrees. This time of year also falls during Arizona’s monsoon season so you can expect to encounter some moisture, especially in the middle to northern half of the state. 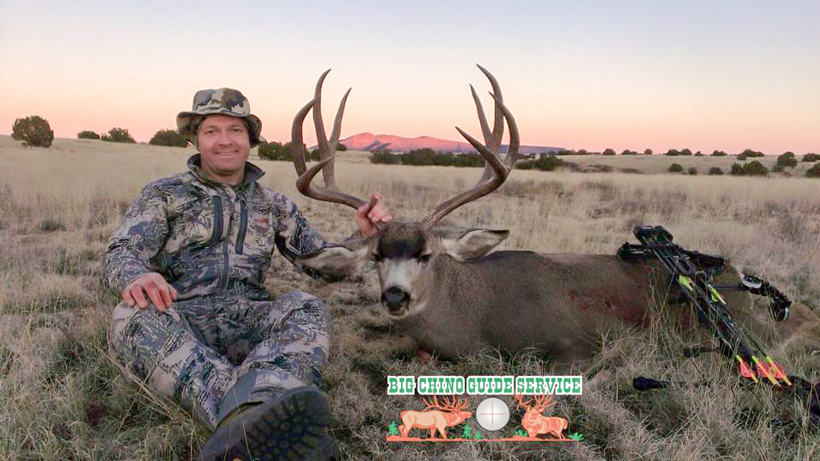 In December through January, you can expect to encounter a prime rutting experience. Most hunters do not expect such a late rut from these deer. This is the case in the most northern part of the state such as the Kaibab and Arizona strip. Those deer rut in November. However, the further south you travel, the later the rut begins. For most of the mule deer and Coues deer, expect the rut to start kicking off in mid-December, peaking around the first week of January and slowly declining as January progresses. Remember that the temperatures and climate will vary based on the part of the state you are in. In the middle to northern half of the state, you can expect temperatures in the low 30s on the coldest days to low to mid 60s — possibly reaching into the 70s if a warm spell comes through. Keep in mind that these are considered the winter months so there is always a chance for snow. Snow only enhances the rut so hunters should not shy away from it if it happens. During the December to January hunt dates, in the higher elevations hunters can expect snowstorms at least a few times with accumulations averaging between 4 to 6 inches.

Over-the-counter hunts can be challenging. Do not make the mistake of thinking that killing a deer with your bow is ever going to be easy especially in Arizona. This takes time, patience and skill. I have personally guided and seen some of the best archery hunters in the world be conquered by these animals. I have also seen the most amateur hunters harvest great bucks on their first try. It is a game of chess with these animals and preparation in advance is crucial. Most of the time hunters can expect to use the spot and stalk technique to get in close, but many also opt to use the tree stand or ground blind methods at watering holes, popular crossing areas or salt licks.

Hunters can expect to encounter mild terrain in Arizona. We do have mountains and hills and most of the time it is necessary to hike up to higher elevation to locate and glass animals with high power optics. The elevation can range from sea level if you are hunting down in the southern part of the state to over 7,000 ft if you are hunting in the northern parts. Vegetation will vary, but the majority will be either juniper or ponderosa pine trees. 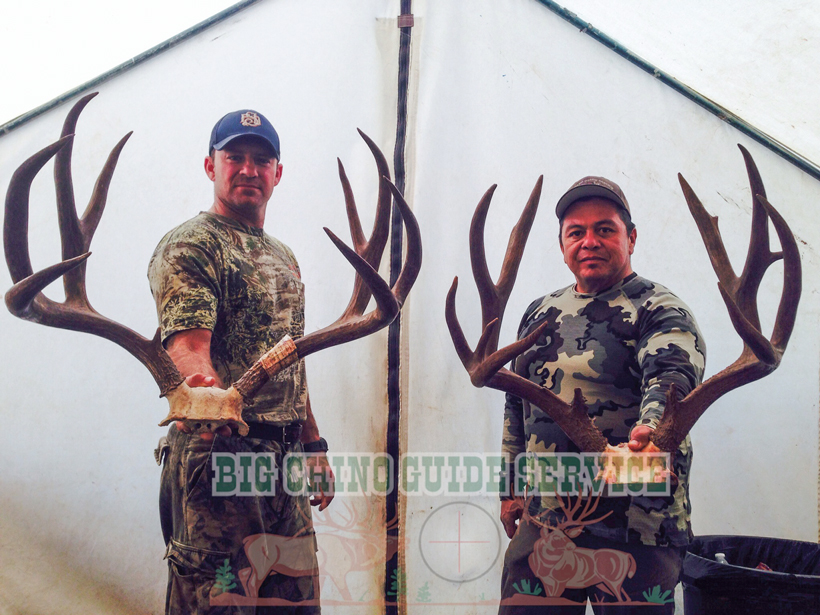 The OTC hunt is open to Coues and mule deer and the majority of hunters choose to hunt mule deer. With that being said, during the OTC season in the open areas, a hunter is allowed to shoot any antlered deer. Hunters can expect to be hunting mule deer that range from the 150 to 170 inch ranges with a low number of bucks in the 180 to 190 inch ranges. They should not be surprised if they encounter one or two bucks on the better side of 200.

Coues deer will range from the mid 80s to 100 inches with some bucks breaking that 105 to 112 inch mark. Of course, with both species there is an opportunity for the possibility of harvesting the buck of a lifetime: a 220” mule deer or a 120” Coues deer. It is never out of the realm of possibilities to get a crack at these bucks but it is just a matter of putting in your time and due diligence to hopefully locate these giants. Anyway you look at it, the possibility of harvesting a mule deer or Coues deer buck with your bow is a great accomplishment that a surprising number of sportsman cannot say they have accomplished.

You should consider this hunt because it gives you an opportunity to hunt a world-class animal by just buying a tag and going hunting. It offers the avid hunter a true western hunting experience without having to wait fifteen to twenty years to do it. The best part is that you can do it every year if you want to!

Increase your OTC success with an outfitter

If you are interested in the OTC archery hunt but are not familiar with Arizona then you should consider talking to an outfitter. Very few outfitters partake in guiding this hunt. Why? Because this hunt does not have a big enough audience yet since it has flown under the radar for so long. It is mainly only local hunters who are utilizing this hunting opportunity. Very few guides and outfitters have the knowledge to go after these bucks during these times of the year and what locations pose the best hunting opportunities. Luckily, Big Chino Guide Service does have this information and guides these hunts. Our favorite and most popular hunt right now is this OTC archery hunt and we are having phenomenal success.

Every outfitter has a specific hunt that they are most sought after — and this hunt has become what we are known for! We have clients that have booked this hunt with us every year for the next 10 years because we are continually harvesting world class mule deer bucks every year. During the 2014-2015 season, we harvested three bucks that were over 170”, one that was in the mid-180s and another that was over 200”. We have years of unrivaled knowledge of the areas and truly give the hunter the best opportunity at the buck of a lifetime with your bow. We live to hunt and we hunt to live and I think that our success over the last 30 years has shown that. If you need any more information, check out our website and give us a call. We would love to talk more about what Arizona has to offer. Good luck this season and remember: train to hunt, prepare to hunt and do not be scared.