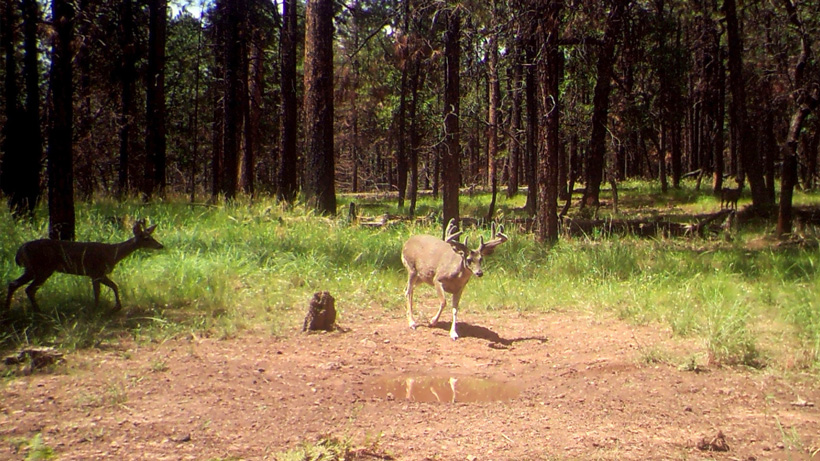 Arizona’s over-the-counter (OTC) archery season begins on August 19 and runs through September 8, 2016. With a few exceptions, the OTC non-permit tag is valid statewide. This year, bowhunters in the Grand Canyon state should have a solid opportunity at harvesting either a Coues whitetail or mule deer buck. 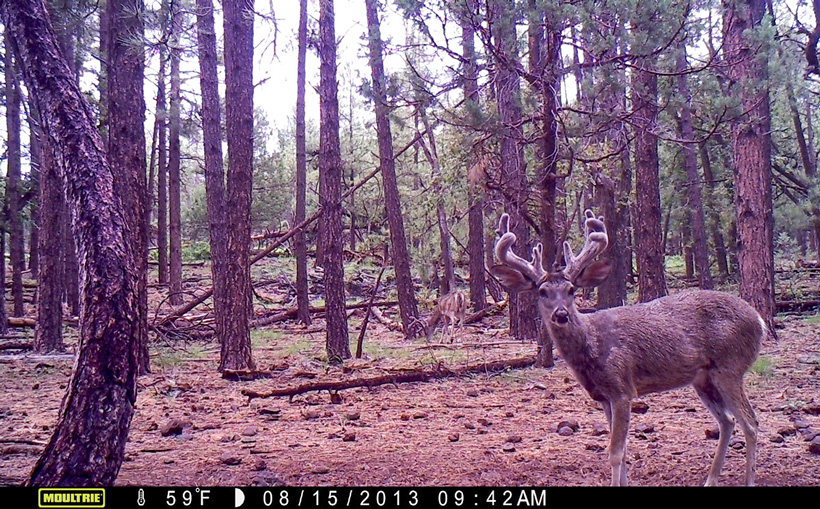 Below are a few units from each region where opportunities at trophy caliber bucks will be slightly higher.

Unit 27 has a good population of both Coues whitetail and mule deer along with diverse habitat for both deer species. Fires from recent years have created vital forage for all big game species, including deer. Combined with many miles of roadless terrain and habitat types from low desert to alpine meadows, bucks have the potential to reach maturity. Recent monsoon showers have provided ample precipitation to keep deer healthy and antler growth headed in the right direction.

Because of its diversity, several hunting methods can be utilized by bowhunters. Tree stands hung at high elevations in mixed conifer and Ponderosa pine forests over water or travel corridors provide a good chance at ambushing an unsuspecting buck. Ground blinds on water at lower elevations provide a similar opportunity; however, deer populations are much lower. Spot and stalk hunting by glassing burned areas and open country are probably the best bet for finding a trophy buck. Getting close enough for a shot is another story.

Early summer rains coupled with monsoon showers over the summer has provided enough precipitation to make deer habitat prime for the upcoming archery season, especially in Unit 7E. The deer population in the San Francisco Peaks and surrounding areas on the Coconino National Forest is doing well. Habitat created from several past wildfires has provided quality forage and cover for mule deer as well as for other big game species. Unit 7 is quite diverse, offering hunting above timberline nearly 12,000’ high as well as open breaks and grasslands down to approximately 4,000’ in elevation. While mule deer are spread throughout, the highest densities of deer will be found in Ponderosa pine forests and transitional habitats at higher and lower elevations.

The San Francisco Peaks are ideal for the backcountry bowhunter. The Kachina Peaks Wilderness is closed to all motorized vehicles, making it a great opportunity for those willing to pack in. Backcountry bowhunters should glass high elevation meadows and parks in early morning and open timber in the afternoon. There are also a few water sources in the backcountry to set up a stand or ground blind. Middle elevation Ponderosa pine and transitional forests offer a multitude of spot and stalk opportunities. Glass from high vantage points to find and intercept bucks. A high number of bowhunters (approximately 10%) harvested a buck during the 2015 early archery season.

Top place to hunt: Unit 17B

Over the last three years, hunters have had higher success than what the state’s guidelines recommend. Yet, the mule deer population in the unit is increasing. Additionally, the buck to doe ratio is on the higher side of the state’s guidelines at 25:100. All of these factors indicate a healthy mule deer herd within the unit. To top it off, the unit has received an above average amount of precipitation this summer. The majority of the unit is covered in pinyon-juniper woodlands and brushy desert chaparral, which offers plenty of forage and cover for mule deer. This year, the conditions are prime for bowhunters to be able find a big velvet mule deer throughout the unit during the archery season.

The majority of this unit is public and easily accessible. The Granite Mountain Wilderness located in the Prescott National Forest offers a backcountry hunting experience for those bowhunters looking to get away from other hunters. Although summer rains have left their mark with above average rainfall, this unit is still in the heart of the arid Arizona desert; therefore, focusing your hunting efforts near annual water sources are vital. Glassing from vantage points into open woodlands and brushy slopes are a great way to find a spot and stalk opportunity on a mule deer buck or two this season.

Alternate place to consider: Unit 17A

This unit has the highest deer density in the region. Additionally, the buck to doe ratio is high (36:100 the measured mean over a three-year period). Over the last 10 years, deer populations are steady or increasing in some areas, despite the higher number of available tags over the same period. The unit is largely desert terrain with some higher mountains covered in pinyon-juniper habitat. Summer rains have provided critical precipitation for the arid region. With its close proximity to the Phoenix Metro area, this unit is a likely candidate for bowhunters looking to get out of the valley in search of a mule deer buck. For those hunters looking to put in the time, a buck scoring over 150” is realistic.

While there is plenty of public land with good access, there is also a portion of the unit that is private. Hunters willing to ask to obtain permission to hunt private lands may have an advantage over others sharing public access. Glassing the desert floor from high vantage points will provide the spot and stalk hunter an opportunity to find bucks. If conditions are dry, bowhunters should focus their efforts near water sources. This type of hunting can be challenging, but bowhunters enjoyed relatively high success rates in 2015.

Top place to hunt: Unit 36A

This unit has high densities of both Coues whitetail and mule deer in optimal habitat within the unit; however, overall populations throughout the unit are polar opposites. The Coues whitetail population is expanding while the unit’s mule deer population is decreasing, which is the standard in the region. The southern reaches of the unit are best for both species of deer with mule deer predominantly inhabiting the desert foothills and Coues whitetail more likely to reside in steep, rugged mountainous regions. Precipitation has been slightly above average over the last year and habitat conditions are optimal for this time of year. This unit is definitely better for the Coues whitetail hunter willing to deal with high temperatures and Illegal border crossing traffic.

The unit has a relatively high amount of private land, but access to public land is good. Those willing to bowhunt in extreme heat should glass open country with a focus on feed in the early morning and then switching to possible bedding cover in late morning through the remainder of the day. Water is a limiting factor and Coues deer populations will be denser near annual water sources. Hunter success during the early archery season is low, but the opportunity to find a Coues buck over 100” is great.

Recent surveys indicate healthy buck to doe and fawn to doe ratios and suggest that the deer populations—Coues whitetail and mule deer—in this unit are increasing slightly. Additionally, this unit is benefiting from the recent ban on baiting, which has lowered the overall harvest numbers within the unit. This unit is also managed to have a higher ratio of Coues whitetail bucks to does and fawn to does, which means that more mature bucks are present. Over the last few years, a few wildfires and average precipitation have improved overall habitat conditions. This unit has diverse habitat and offers both mule deer and Coues whitetail hunting throughout from flat Sonoran Desert in the southern reaches to transitional Ponderosa pine forests in the northern reaches.

This unit is located along the famed Mogollon Rim and is a top spot for both Coues whitetail and mule deer. The majority of the unit is public land on the Tonto National Forest and is accessible from all sides with the easiest access found in the north and south. The northern region of the unit extends to almost 8,000’ in elevation and lends itself to stand hunting, either over water or travel corridors. The Hellsgate Wilderness is ideal for the backcountry bowhunter wanting to get away from pressure from other hunters. The southern end of the unit is a spot and stalk bowhunters’ paradise with hundreds of square miles to glass. The terrain throughout the unit is steep and rugged, but provides a realistic opportunity for both a trophy-class Coues buck or mule deer buck. 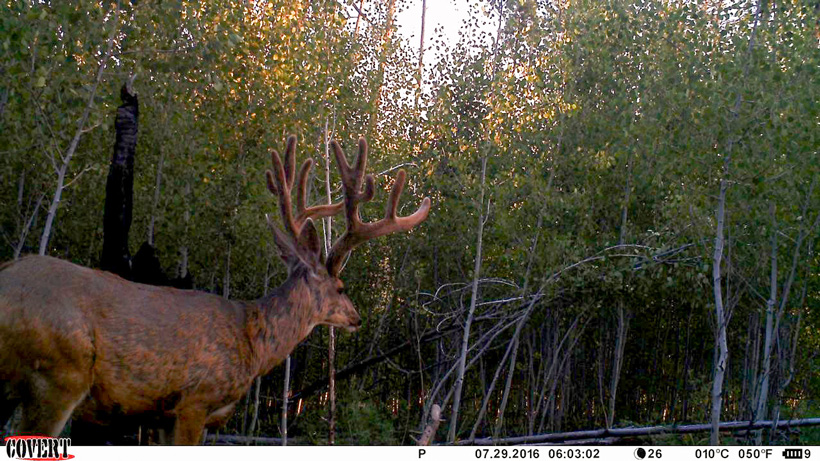 While each of the top units listed above will likely provide a solid chance at a trophy OTC Arizona buck, they aren’t the only choices for this early archery season. Recently, goHUNT added a powerful feature to INSIDER that allows INSIDERs to use Filtering 2.0 to find the best location to hunt based on their own preferences.

You can read a recent article here on how to find and compare Arizona’s OTC hunts based on harvest success. Moving forward into the 2016/2017 season, pay close attention to the Arizona Unit Profiles to see the timing and precipitation levels of all the different units.

If you're still undecided if an Arizona OTC hunt is right for you, check out these articles: