Using GOHUNT Maps to up your spring bear success 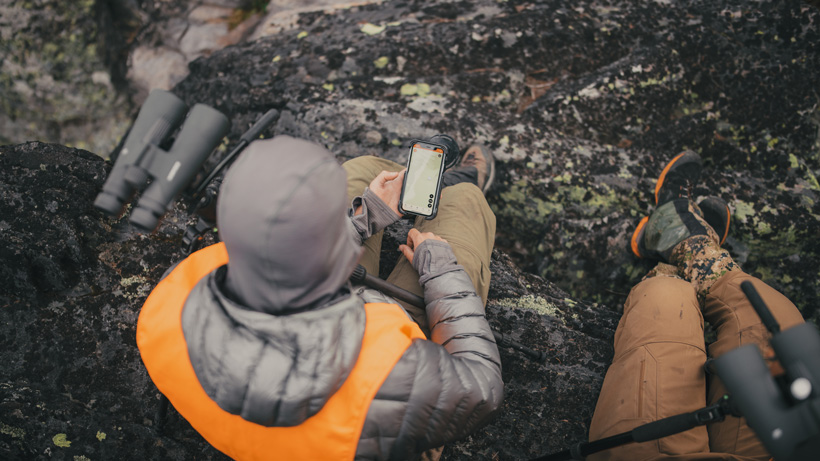 The world is finally beginning to wake up from its winter slumber, and with that, so are black bears all across the west. Black bear seasons are getting ready to kick off in many western states and many hunters will begin making their trek in hopes of successfully punching a tag.

Black bear hunting is a very unique western experience unlike most others but initially learning to hunt them can take some time and patience. With a little bit of understanding on bear behaviors and needs at the time of the year and the use of some cool tools in our GOHUNT Maps platform you can quickly start cutting down the learning curve for hunting these awesome animals, though.

Generally, one of the most significant issues hunters will initially face when scouting black bear areas will be current snow levels and snowpack. Spring snow is much different than the fluffy stuff that typically falls in December. During the spring melt snow is often considered “rotten.” Rotten snow can typically be characterized by frozen patches, sloppy wet patches, and a sure bet of post-holing. Imagine walking on a floor that could fall out from underneath you at any time. In short, cross-country travel through snow can be a chore! What's more, all of this melting snow has to go somewhere so most steep drainages can become swollen in spring run-off water. Extremely high caution needs to be used when crossing creeks and streams.

Along with walking conditions, you can also encounter bad driving conditions, particularly on north faces. During the spring of the year, it is not uncommon to be cruising on a dry road and come around a corner to find yourself face to face with a five foot tall snowdrift.

When it comes to snow conditions, I like to keep an eye on SNOTEL maps, but one of my preferred methods is to call a local Forst Service Ranger Stations local to the area I’d like to hunt. They can provide detailed reports on road conditions, conditions of trail heads, and overall snow depth.

When it comes to breaking down an area for potential bear spots there are a few hard rules I really like to stick by. In general, I would say that the number one mistake most people make when it comes to bear hunting is simply overthinking the whole thing. Black bears are generally fairly predictable in terms of habits the areas in which you’ll find them can be equally as predictable.

The most significant factor affecting a black bear's habits during most of the months of April and May will be food. After a long hibernation bears become voracious eaters and will seek out the most nutrient-rich and plentiful food sources that they can. Typically, this nutrient-rich food will come in the form of natural grasses.

Green up will first occur on southern exposures in lower elevations but can occur really anywhere that has melted off and is getting snow. Earlier in the season, areas near rock faces can be great as the radiating heat creates fantastic growing conditions. As spring progresses, the snow line will recede into higher elevations and the bears will follow. The freshest and greenest grass shoots will typically be found right at the snowline and this is what bears are seeking out.

So, as a general rule of thumb, follow the snowline up while focusing on the greenest and most lush areas, avalanche chutes are among my favorites for this. One thing to note, during warm springs it is possible for the snow to melt out faster than green-up occurs. Meaning that you might find a high elevation south-facing slope that is completely cleared off of snow but has not yet greened up.

Spring bear hunting is all about the glassing points. In states with great habitat and good bear numbers, you can encounter bears nearly unit wide. Finding good glassing points early on can really hone you in on productive areas quickly. When first coming into a unit I really like to look for good general glassing spots that give me a great view of as much area as possible. At times, this means that I am glassing areas where I’ll have no chance of even shooting a bear on that day, but spotting a bear can clue me in on a great spot for the next day. Color variations considered, bears can generally be spotted from very long distances without too much trouble and this long-distance approach is a great way to cover a pile of country in no time.

Note: I can’t stress this one enough - Stay on your glassing point until you can no longer see through your binoculars or spotting scope! Big boars will commonly move into feeding areas during the last few minutes of daylight and heading back to the truck with 30 minutes of light left can mean the difference between spotting a bear and not.

Before rally diving into the maps, I’d like to touch on a few essential tools I like to use with our Maps when it comes to e-scouting black bear. If you’re not a current Insider or Explorer member, now is the perfect time to join to get access to the best maps for hunters.

Hands down, my favorite tool for e-scouting is the Terrain Analysis tool. This works well for all species but is a killer for spring bear. With this tool, I can highlight all of the south facing slopes in a given area to maximize my glassing efficiency and really cut down on days in the field to initially locate a bear. Along with highlighting certain slope aspects, I can also filter my search my slope degree of angle and elevation bands. While initially e-scouting I will generally ignore these settings as I have seen bears on flatlands and sheer cliffs and elevations will be largely dictated by the available snow levels.

The other tool I will use extensively will be 3D mode. Our world is in 3D and visualizing my map, in the same way, can really help with breaking down terrain for potential bear habitat.

Layers will really be the foundation for your e-scouting efforts. For spring bear I will generally keep this fairly slim and use private/public filters, roads and trails, and GMU boundaries.

APPLYING THIS TO GOHUNT MAPS

Now, with some understanding of typical bear behavior and map tools, we can start analyzing what a typical spring bear area might look like and how to identify them.

The first thing I’m going to do when picking a unit apart of set my Terrain Analysis tool to highlight south facing slopes and then I’m going to start flying over the unit and marking areas that are south facing and have good amounts of vegetation. A healthy mixture of timber and open ground is great, but I really like to key in on avalanche chutes. 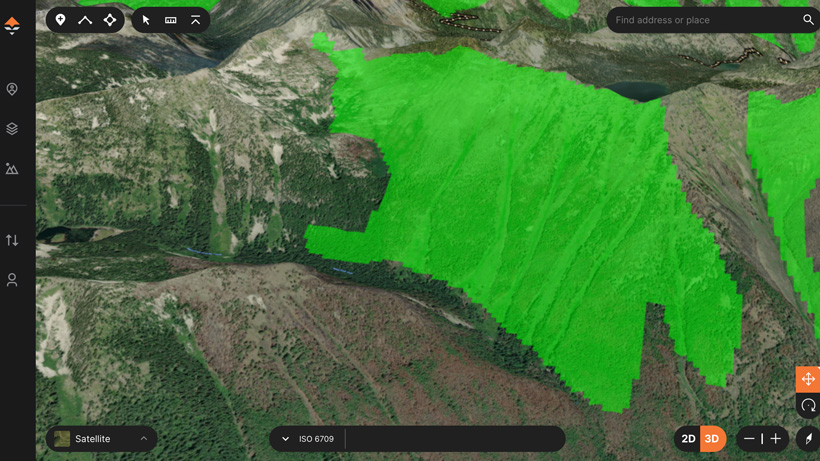 Once I’ve found a promising looking area I can start exploring glassing options and look at the real potential of hunting an area. 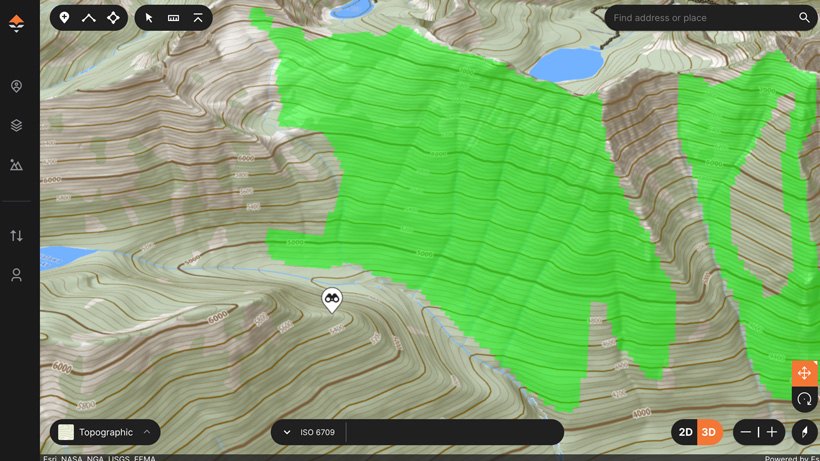 A potential glassing location marked on the map.

In this particular area, I noticed a large ridge adjacent to the primary south slope I am targeting. Using the measurement tool I can see that even mid-slope is well out of my rifle range, but I can see a massive amount of this slope and with most of the east-facing aspects as well. 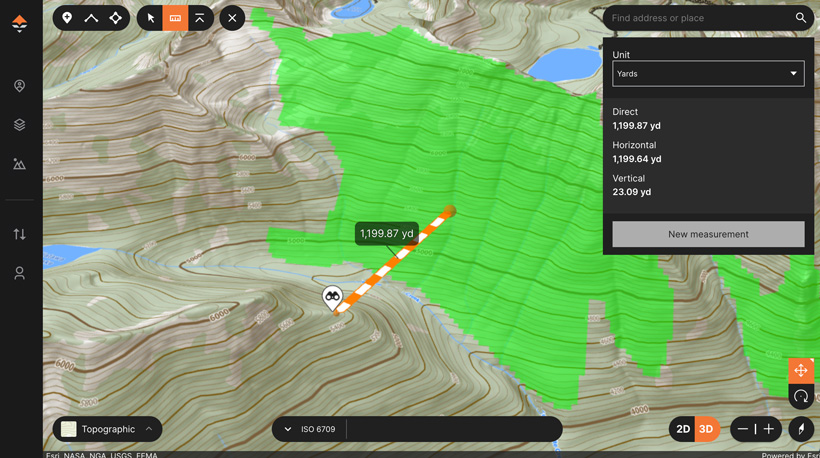 While not being able to shoot from a particular location is not ideal, I will take the loss with the understanding that one night on this glassing point could clue me into several bears that would be difficult to spot from other locations on the mountain.

The primary thing to keep in mind with most of the western states is that most areas have good black bear populations. Locating key resources such as good habitat and good glassable locations will be more important than searching for the most abundant densities. You need to find the bears before you can kill them. In the particular area we are using for this article, I really like this location due to the multiple avalanche chutes available to glass and the timber cover in close proximity to these locations. I would expect to be seeing bears through these avalanche chutes along the snow line well into the later days of season. The continued snow drainage through these areas will keep food fresh and full of nutrients throughout the season. 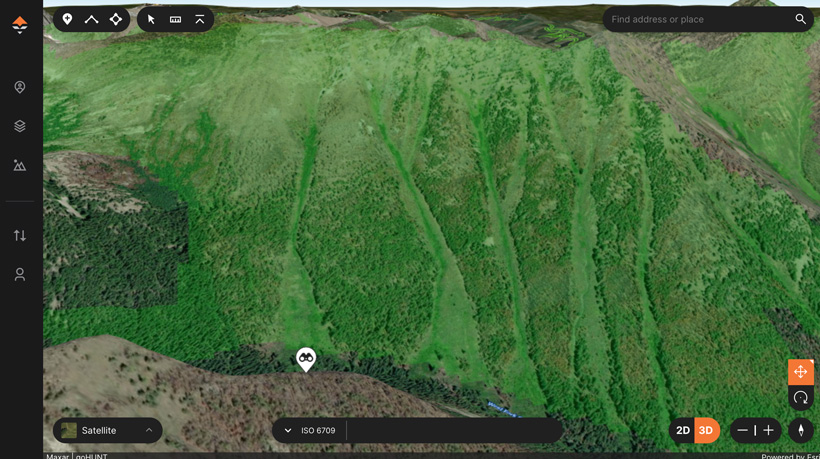 Loads of great bear habitat locating along this slope.

Really, black bears can be pretty simple but most hunters tend to overcomplicate them. Bears at this time of the year are actively focused on stuffing their faces and food really dictates a lot of their movements. Get on a good glassing point, spend a lot of time there, and cover as much country as possible. Unless spooked, bears can generally be relocated fairly easily, and sometimes “scouting” from a good glassing point can be worth an evening if it saves you several days of wandering around the woods hoping to bump into a bear.