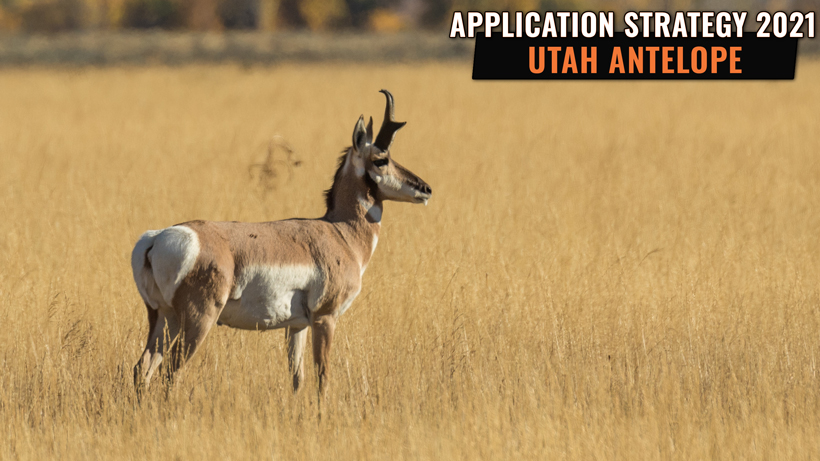 To view important information and an overview of Utah’s rules/regulations, the draw system and bonus points, tag and license fees and an interactive boundary line map, check out our State Profile. You can also view the Utah Antelope Profile to access historical and statistical data to help you find trophy areas.

Applying for a state you've never hunted before can be daunting but we are here to make it easy. In the video above, Trail goes over some of the most commonly asked questions when applying in Utah.


Note: Applicants need to buy either a hunting license or combination hunting/fishing license to apply. Applicants will not be charged the cost of the permit unless they are successful in the draw. 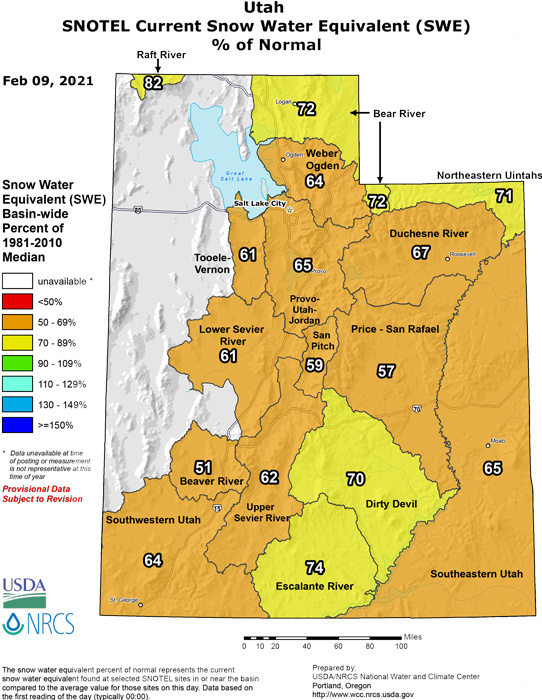 In regards to snowpack, currently, the entire state is in abysmal conditions and many areas experienced record setting drought conditions in the latter two-thirds of 2020. No area of the state is even at 70% of normal. It’s still early and it’s not uncommon for Utah to receive a good portion of its snowfall in February and early March, but if it does not, horn growth could be poor in 2021. Some of Utah’s best trophy antelope areas are experiencing record level droughts. 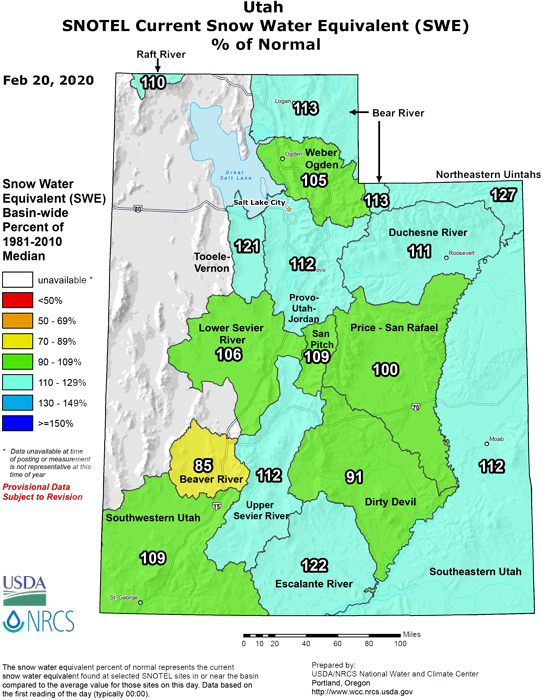 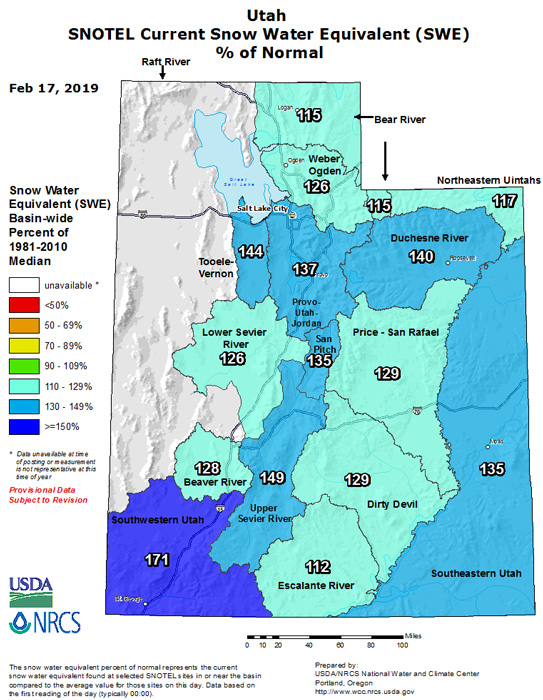 Utah issues 10% of their draw permits to nonresidents. Limited entry elk hunts are allocated through a modified bonus point system. Half of the permits for each hunt are given to applicants who apply with the most bonus points. The other half are allocated through a random draw with weight given to the number of points you have. Essentially, the more points you have, the more chances you get in the drawing. If there is an odd number of permits, the bulk go to high point holders. If there is one permit only, it will be randomly drawn.

Up to four applicants can apply for limited entry hunts on one application. Nonresidents and residents can apply together. Points are averaged for a group application and rounded down to the nearest whole number. There must be enough permits to cover the number of applicants on your group application; otherwise it will be rejected. That goes for residents and nonresidents who apply together as a group. Nonresident permits will come out of the nonresident pool for that hunt — make sure there are enough.

Utah’s draw goes in the following order from first to last:

Utah does not allow applicants to draw multiple limited entry tags in the same draw/year. You also cannot draw a limited entry and a once-in-a-lifetime (moose, bighorn sheep, mountain goat or bison) permit in the same year.

Successful applicants who wish to return a permit that they have drawn can do so 30 days prior to the start of their hunt. In this case, they can have their bonus points reinstated; however, they will not earn one for that year's application. The cost of the permit will be refunded as long as it is returned 30 days prior to the hunt. If applicants drew a permit as part of a group, all members of the group must surrender their permits in order to have each applicant’s bonus points reinstated. Hunting licenses and application fees are nonrefundable.

Given the fact that so much of the West is currently in drought conditions, we thought it would be pertinent to discuss horn growth in antelope and how that may relate to the environmental conditions.

Antelope shed their horn, or sheath, in mid-November. Prior to shedding their horn, a new one will already begin growing beneath it from an inner boney core. After the horn is shed, new growth begins with the prong and goes upward. From the time they shed in November until mid to late March, bucks will have put the growth into the prong and upper portion of the horn. Later in the year, from the end of March to July, the growth is added below the prong and mass is added near the base of the skull. By late July, the horn has hardened in preparation for the rut, which typically occurs in August to late September.

The timeframe between December and late March is critical for good prong length and height in general. The later months from April to July are more critical for mass and some length below the prong. Feed is always important to horn/antler growth and antelope are selective feeders. Ideally, horn growth for antelope is best when there is good fall and winter moisture, but not in a manner where snow piles up and herds experience prolonged freezing temperatures. Good spring and early summer rains would hopefully follow. 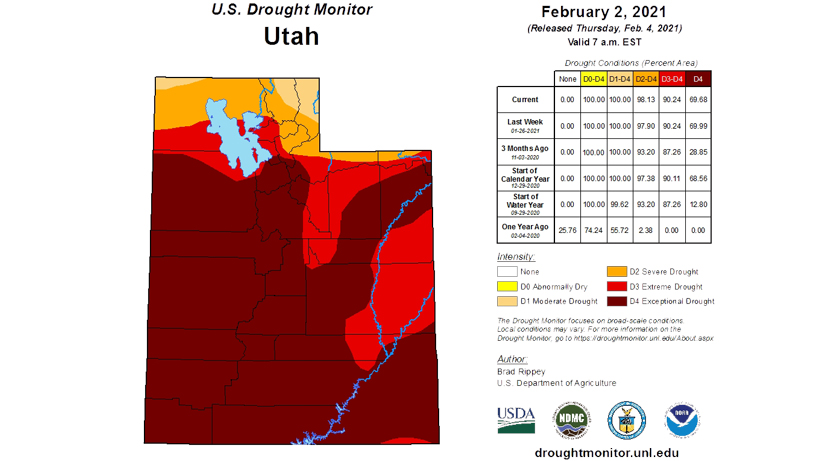 Because we are in the heart of the critical growth period for prongs and height, it does not appear that it is going to be a good year for high scoring buck antelope. If the trend continues — as it appears it will — it’s likely to be a very poor year for horn growth all the way around. A big buck in 2021 will have to have been a big buck that made it through the 2020 hunting season. It’s not likely that average bucks will develop into trophy caliber bucks in 2021. The feed is not there to provide good amounts of growth and development, especially on some of Utah’s desert units where antelope are also competing with overpopulated herds of wild horses and burros.

That’s the bad news. The silver lining is that Utah has been more generous with the number of permits they allocate in recent years. Utah also offers season specific permits for archery, muzzleloader and rifle hunters and many herds are meeting or over population objectives. The primary exception to that is the Parker Plateau herd, which has dwindled significantly. The Parker herd was commonly utilized as a source herd for transplanting antelope into new herds, but that is no longer the case. There will be a new hunt/area in what the Utah Division of Wildlife Resources (UDWR) is calling the Plateau/Highlands that occurs along the edges of the Parker until numbers can rebound.

The best units have been the San Rafael/North and the Book Cliffs/South. There are a few others that have produced bigger bucks, including the Fillmore/Oak Creek South, Southwest Desert, Nine Mile/Anthro-Myton Bench, Book Cliff/Bitter Creek and the La Sal/Potash/South Cisco. Box Elder County in northwestern Utah has also produced a decent number of trophy bucks although private/public land may be worth some research before you apply in these areas.

Most units can be drawn with one or two preference points. If you want to do a doe antelope hunt in Utah, plan on applying during the June antlerless/doe draw. This is a separate draw from the regular big game draw. Points are separate and will not be impacted.

I have 0 antelope points. What can I expect?

With no points, there were two archery antelope hunts that had 100% odds last year: Box Elder/Promontory and Box Elder/Snowville. There were also two archery hunts that had better than 50% odds: Plateau/Highlands and San Juan/Hatch Point. The Box Elder/Promontory hunt has had 0% success for the past three years; however, the Snowville hunt typically has very good success that has been 50% or greater four out of the last five years.

One of the best hunts that was available with no points last year was the Pine Valley muzzleloader.

There were no hunts guaranteed to nonresidents with no points. The highest odds were for the Box Elder/Snowville and the Box Elder/Puddle Valley archery hunt. All rifle hunts had odds of less than 1%. The highest odds muzzleloader hunt was the Cache/Morgan South Rich/Ogden with 1.9% odds. There were also a couple of archery hunts with odds at 2.6%, which were the Pine Valley and the West Desert/Riverbed. The Plateau archery hunt also had 4.2% odds.

What can I do with 3 to 6 antelope points?

Resident applicants with six points could have drawn any archery hunt except for the West Desert/Riverbed hunt. With four to five points, the best archery options are the Beaver, Book Cliffs/Bitter Creek, Fillmore/Oak Creek South, San Rafael/North and the West Desert/Rush Valley and the Southwest Desert. With three points, bowhunters should review the odds for Book Cliff/South, Cache/Morgan-South Rich/Morgan, La Sal/Potash/South Cisco and Nine-Mile/Anthro-Myton Bench.

Muzzleloader hunters might consider the Plateau/Highlands, South Slope/Bonanza/Diamond Mtn and, at four to six points, the Cache/Morgan-South Rich/Ogden, Nine Mile/Anthro-Myton Bench, San Rafael/North and the Southwest Desert. The Panguitch Lake/Zion North units are also a good option at six points.

The best rifle odds at three points are the South Slope/Vernal at 19% and the Book Cliffs/Bitter Creek at 18%. The Nine-Mile/Anthro-Myton Bench rifle hunt also had 15% random odds. With six points, the Book Cliffs/Bitter Creek, Box Elder/Promontory, La Sal/Potash/South Cisco, Nine Mile, Anthro-Myton Bench, Pine Valley, San Juan/Hatch Point and South Slope/Vernal all had 100% odds. The San Rafael/North muzzleloader is possibly the best hunt within this range and was drawn last year with five points. The Southwest Desert muzzleloader hunt is another great hunt available last year with four points.

With three to six points, the rifle antelope hunts typically have odds in the 1% to 5% range. At six points, the Plateau muzzleloader hunt was available. That may not be the case this year with the boundary changes. With six points, there are archery hunts with pretty good odds, including the Cache/Morgan-South Rich/Ogden, Pine Valley, West Desert/Riverbed, and the Plateau. All of which had double-digit odds.

What can I expect with 7 to 10 antelope points?

Every archery hunt was available with seven points in 2020. There were 13 archery hunts that had 100% harvest success that were also drawn with seven points. Some of the best of those are the Panguitch Lake/Zion North, Nine Mile, Anthro-Myton Bench, La Sal, Potash/South Cisco, Fillmore/Oak Creek South, Beaver and Book Cliffs/Bitter Creek.

Rifle hunters with seven points had many options, including the Beaver, Book Cliffs/South, Fillmore, Oak Creek South, San Rafael, Desert, and the Southwest Desert. The Mt Dutton/Paunsaugunt rifle, Panguitch Lake/Zion North and South Slope/Bonanza/Diamond Mtn were good options at eight points. The best options with nine to 10 points are the San Rafael/North and West Desert/Snake Valley.

Archery hunters have better odds than the muzzleloader and rifle applicants. A few notable options are the Cache/Morgan-South Rich/Ogden, West Desert/Riverbed, Nine Mile/Anthro-Myton Bench and North Slope/Three Corners/West Daggett. All of those had double-digit odds at seven points. At 11 points, the Nine Mile/Anthro-Myton Bench archery hunt was available to draw and, at 12 points, the Southwest Desert archery hunt was available. The San Rafael/North archery hunt required 14 points in 2020.

The hardest to draw hunt was the San Rafael/North rifle hunt with 18 points.