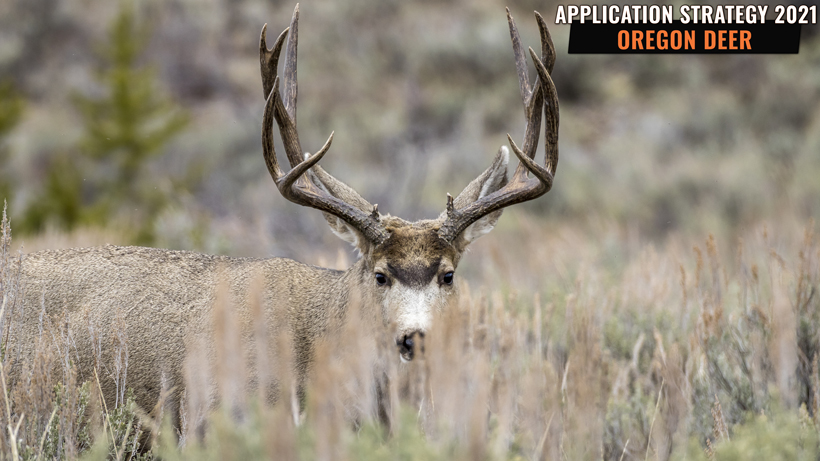 Note: The application deadline in Oregon for all species is May 15, 2021 at 11:59 p.m. PST and all applications must be submitted online or at a license sales agent.

Remember that goHUNT has Draw Odds for all female species.

To view more important information including a state overview of Oregon’s rules/regulations, the draw system, draw odds and license fee go to the Oregon state profile. It also includes an interactive map where you can research unit boundaries and data on a unit by unit basis.


*Tag fees only required if you are successful in the draw. 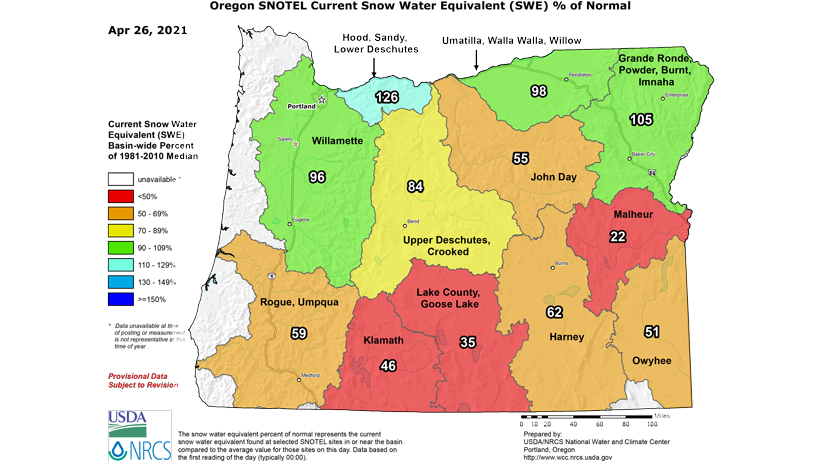 In 2021, Oregon has fared better than many other western states in terms of snowpack, but the drought lingers and continues to worsen with the winter months behind us. In terms of the current snowpack, every portion of the state is having a better year when compared to 2020 except for Lake County/Goose Lake, Malheur and Owyhee. The northern portion of the state is at 100% of the annual average and several areas are over 120%. The southern half of the state has not done nearly as well and the southeastern portion is really struggling, sitting in the 60% range. 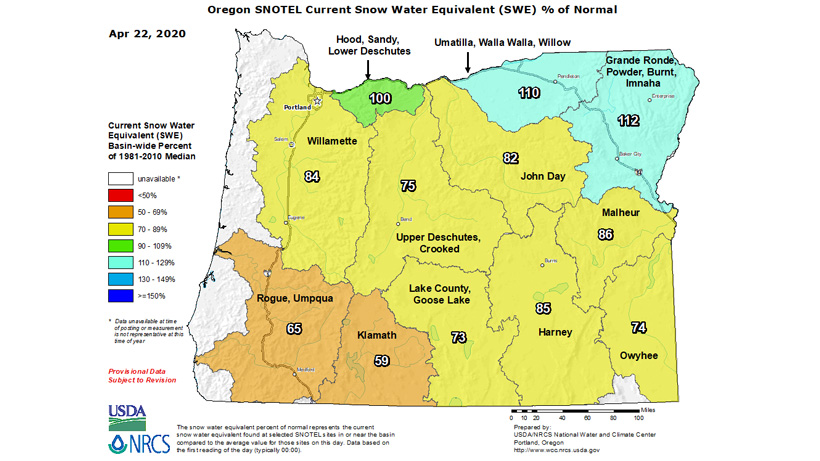 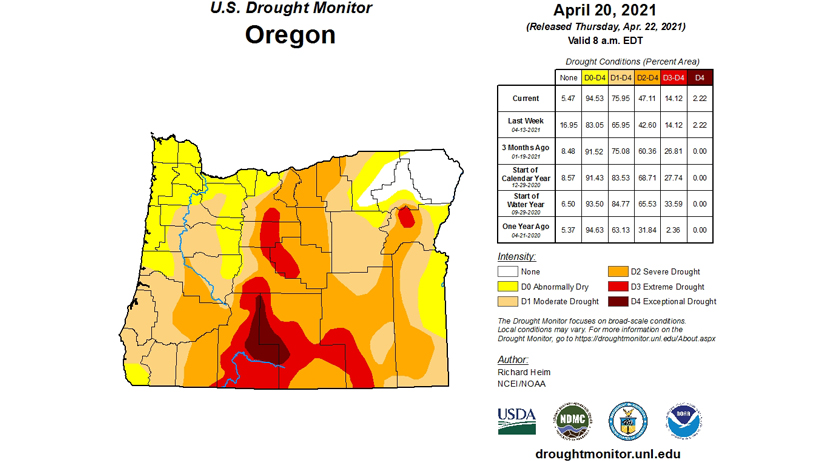 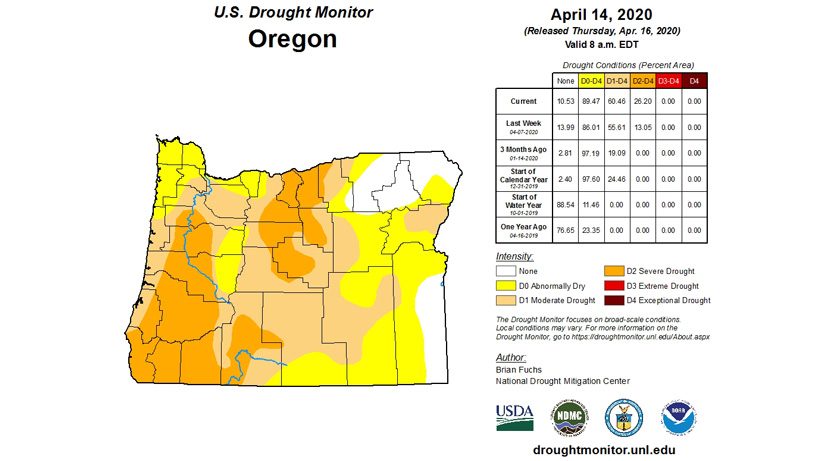 Oregon’s deer draw works on a preference point hybrid system. There is both a preference point and a random draw portion. Out of the total tags, 75% are allocated to the highest point holders who apply for any given hunt and the other 25% are randomly allocated with no weight given to the number of points that you have. On the random side of that draw, every applicant is on a level playing field for those tags. Note: if there are only three or less for any particular hunt, those will be given to the highest point applicants.

Oregon will allow applicants to enter five hunt choices. Every applicant's first choice is considered before moving to an applicant's second choice, so on and so forth. Preference points are only purged if an applicant draws their first choice. There is no waiting period for reapplying for deer if you drew a tag the previous year.

If you are successful in drawing a tag, you have up until the day before the earliest hunt starts to purchase the tag. Once you have purchased the tag, you cannot return the tag for a refund. If you draw your first choice, your preference points will be purged so make sure you actually want the permit you apply for.

In addition to the regular controlled hunt drawing, Oregon offers a separate draw for hunts that they call premium hunts. This is a completely separate hunt drawing that allows tag holders to hunt extended season dates with any weapon. These hunts are 100% randomly drawn each year and there are no preference or bonus points attached to the application. There is no resident or nonresident quota. Standard application fees exist and the applicant can apply for five different choices on their application. They are only allowed to apply once per species (hunt code).

Oregon manages their mule deer hunts heavily skewed towards opportunity. Trophy hunts are few and far between and the opportunities to hunt a mature buck are slim. For nonresidents, those hunts are even more rare given that the percentage of good tags is so low. To add to that, mule deer occupy the central and eastern portions of the state. As previously stated, the eastern portion of the state, which had been previously available for archery hunters as a general tag, are now going to be allocated in the draw as controlled tags. The statewide mule deer population has been on a continuous slide for years and the most recent population estimates are down once again. Statewide, the estimated population is 176,017, which is almost 60,000 fewer deer since 2015.

If you live in a neighboring state and are looking for an opportunity to hunt mule deer, Oregon still offers decent odds. Hunters just need to have their expectations in check and understand that the opportunity to hunt and harvest a deer are decent, but the chance at a big buck is not likely to happen.

If you are looking for a hidden gem, your best bet is to pick up your bow and arrow and become proficient with it and consider applying for one of the formerly general season hunts.

The other method in locating a hidden gem is with resources like Filtering 2.0 and Draw Odds. It has never been easier to locate a unit that fits your individual goals. You can pour over information like trophy potential, draw odds percentages, buck:doe ratios and a percentage of 4 point or better per hunt and unit. You can also explore the muzzleloader and rifle hunts. There are many other hunts that offer decent odds with good trophy potential.

What can I expect with 0 deer preference points?

Out of the 86 hunts available to residents, 20 could have been drawn with no points. Archery hunts in Unit 36, 37, 54/55/56 and 74 are good options with good trophy potential. Also remember that there are 38 new archery draw hunts that were formerly available as a general tag. We do not know what the demand and odds will be for those hunts because they are new for this year, but most should have good odds with no points. Unit 57, 58, 60, and 61 all had rifle hunts that had 100% odds with no points and harvest success rates of 25% or more. Unit 60 and 61 both have nearly 75% public land as well.

Other options include Unit 31, 40, 43, 44 and 45. Those areas offer the opportunity to draw a tag, but are limited in the amount of public land. Unit 31 has 41% public land. The others range from 6% to 15% public land. Those can be great hunts if you can find access, but without it those can be tough areas to hunt.

The other option, if you have no points, is to take a swing for the fence approach. With the Oregon Department of Fish and Wildlife’s (ODFW) draw system, remember that a portion of the tags are randomly allocated. Even if you have no points you still have some chance to draw the best tags.

There were five controlled archery hunts that had 100% odds — one of which is traditional only. The best option for a controlled archery hunt that was drawn with zero points is likely Unit 36 and 54/55/56. Once again, there are many hunts that were general archery that are now draw tags. We cannot say those will be guaranteed but there are some good options there, including archery 60, 61, 62, and 63. Muzzleloader hunts in Unit 45 and 48 are also worth considering.

From the table above, there are also rifle hunts that nonresidents can draw with no points. You might consider Unit 31, 57 and 58.

What can I expect with 5 to 6 deer preference points?

What can I expect with 10 plus deer preference points?

The best controlled archery hunt within range is the August 70/71 hunt that was drawn with eight to 10 points. Beyond that, it’s a bleak picture for archery hunts. The Unit 44 hunt had 100% odds with 25 points. The archery Unit 39 hunt required 22 points.

The Warner North rifle hunt required 22 to 23 points and had random odds of .009%. The one rifle hunt that may be in reach if you find yourself in this range is 69, which was drawn at 13 to 14 points.

Oregon’s blacktail populations are doing well and most of the units are offering general season over-the-counter (OTC) tags for both archery and rifle hunts. There are also some limited quota controlled hunts for archery, muzzleloader and rifle hunters. The populations are doing well although Oregon does not have a blacktail deer management objective based on population. Obtaining an accurate count on the Columbian blacktail deer in the coastal states has proven near impossible using normal counting practices as the dense vegetation makes it very difficult to see and count deer populations. Instead, the states are left to conduct on-the-ground surveys and assess hunter success year after year to make adjustments in the number of permits allocated annually. The state herd is somewhere around 300,000 to 350,000 total deer. We will cover buck:doe and doe:fawn ratios in the table below.

Note: There are four units that have established herds of mule deer as well as blacktail. Those units are 30, 31, 41 and 42. Be aware that blacktail bucks harvested from those units would not qualify for B&C.

I have 0 deer preference points. What can I expect?

Residents had four hunts that could have been drawn with no points. Those hunts are archery 21/22/23/24, muzzleloader 23 and rifle 16/19/21/22/30/31 and 42. Harvest success for the archery hunt and the muzzleloader is relatively good for those hunts.

What can I expect with 5 to 6 deer preference points?

Every hunt is available except for muzzleloader 21/23, rifle 21/23, 41 and the late Unit 42 hunt. Some of the more interesting options might be muzzleloader 21, 28, 41/42 or rifle in Unit 15 and 41/42. All of those hunts required two or three points so you will be giving up a few points to draw those. The hunts that cannot be drawn required 11, 14 and 21 points in order to draw in 2020. Applicants could decide if they are in it for the long haul to draw one of those or if they just want to cash in and go hunting.

If you want to burn your points and go hunting, the archery hunt in Unit 31 took three points, Unit 27 and 41/42 muzzleloader required 4 points. The early rifle 41/42 hunt required three points.

Several of the best hunts (41 late rifle, 42 late rifle) are likely to require 22 points plus or in the case of 42 late, there was not a nonresident tag at all. Unit 28 muzzleloader required 13 points, which was likely the best hunt if you are in the 13 to 20 point range.

Oregon has the only delisted populations of Columbian whitetail deer in the world. Although there are whitetails scattered up and down the Pacific Northwest, the southwest corner of Oregon holds populations of approximately 2,000 + deer. There are very few tags available each year and that is the reason that these units can be rather difficult to draw.

Oregon has a decent population of whitetail deer in the northeastern portion of the state. There are 21 units that offer a chance at a whitetail buck although there are very few hunts/tags that are species specific. Generally, the tags for those units are valid for either a whitetail or mule deer. We will cover the whitetail specific hunts below. Trophy potential is generally average; however, there are a few bigger bucks taken each year.

Use Filtering 2.0 for more information about these units and others that have established herds of northwestern whitetail deer.