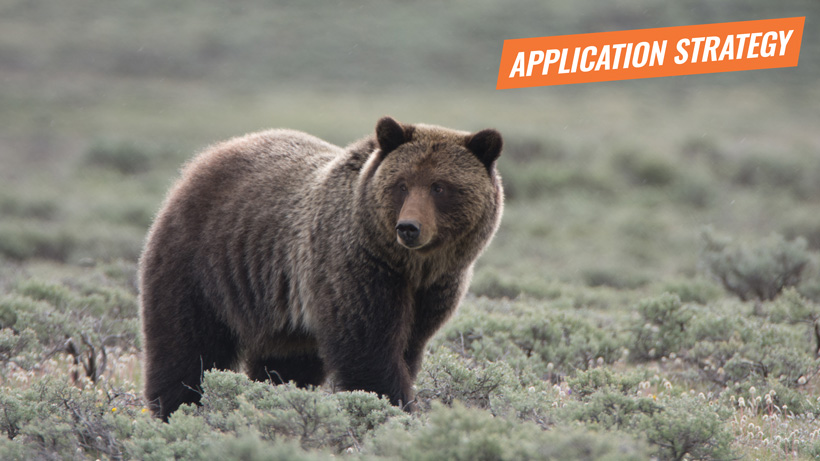 If you've been following along with the hunting News that has been posted on goHUNT the past six months, then you know that grizzly bears have been a hot topic. We have covered all of the grizzly bear hunt updates for Idaho, Montana, and Wyoming. Side note: Montana was the third state that was considering a possible hunt but decided against it for 2018.

This is a historic moment for Idaho and Wyoming. With grizzly bear populations recovered, it was time to turn the management back to the states. The conservation strategy for the Greater Yellowstone Ecosystem grizzly population includes hunting as a management tool when the population is more than 600 bears with the current population estimate at 718 as of 2017.

Limited to residents only

Predicting the number of applicants is impossible, but one thing is sure... draw odds are not going to be in your favor for this historic hunt, even when it's limited to residents only.

A lot of eyes will be on the lucky hunter who pulls the tag.

If you want to hunt a grizzly bear in the lower 48 and you're a nonresident, Wyoming is currently your only hope.

In May, Idaho Fish and Game announced their decision to offer a grizzly bear hunt for the 2018 season. Idaho is offering up one grizzly bear tag in a controlled hunt through a random drawing that is limited to Idaho residents only. Applications will be accepted from June 15 through July 15. The official Idaho grizzly bear regulations can be found here. Resident hunters who applied for any other controlled hunt in 2018 may still apply for this grizzly bear hunt.

This is a once-in-a-lifetime hunt

A grizzly bear is a once in a lifetime species and therefore any person who has harvested a grizzly bear in Idaho may not apply for a grizzly bear tag. Note: In 2018, applicants will not be disqualified if they applied for moose, bighorn sheep, mountain goat or deer, elk, and antelope. This is due to the controlled hunt timing and will apply for this year only.

Shooting a radio-collared bear is legal. Biologists use radio collars to monitor grizzly bear activity, assess population status and help determine future hunting opportunities. Hunters are required to return any radio collars when they check in their grizzly bear.

Hunters are not required to retrieve meat from a harvested grizzly bear in Idaho.

There is a chance this hunt may not occur due to pending litigation in federal court. If the hunt is canceled by court order prior to the drawing, applicants will not be refunded either the hunting license or application fees. The tag fee will be refunded to all applicants. If the proposed hunt is stopped after the drawing results, the successful applicant will have the tag fee refunded, but not the hunting license or application fee.

No person may hunt or pursue grizzly bears at any time within 200 yards of the perimeter of any designated dump ground or sanitary landfill. 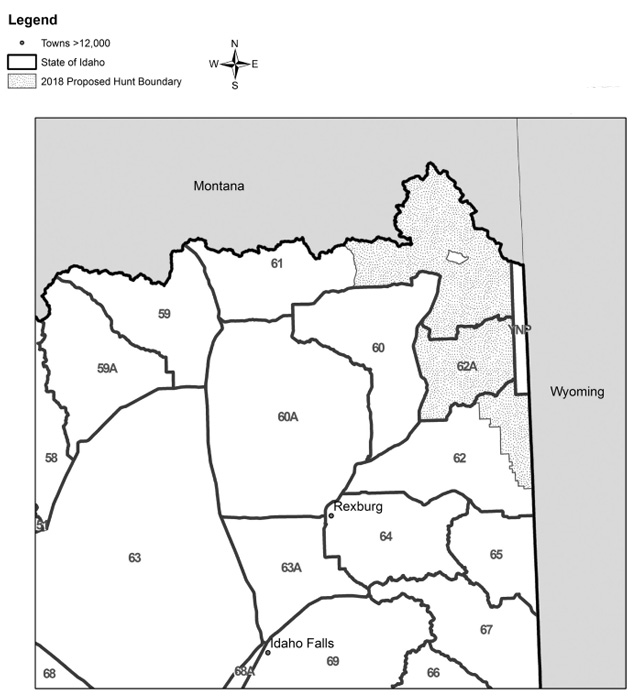 
* That portion of Unit 61 east of Howard Creek except the portion enclosed by the Big Springs Loop Road and U.S. Highway 20 is closed. That portion of unit 62 within the Caribou-Targhee National Forest boundary. All of unit 62A.

How is the number of bears available for harvest determined?

Idaho, Wyoming, and Montana have agreed to manage the Yellowstone grizzly bear population in the DMA between 600 and 748 bears, which corresponds to the average population from 2002 to 2014. No hunting will occur if the population is below 600 bears in the demographic monitoring area (DMA).

Why a single tag?

Idaho, Montana, and Wyoming allocate available hunting opportunity based on the proportion of land each state has within the DMA (excluding Yellowstone and Grand Teton national parks where no hunting is allowed). Idaho has 8% of the land in the DMA, and in 2018, 8% of the total allowable mortality available for hunting represents one male bear.

Idaho Fish and Game biologists will work with the person who receives the tag to ensure the hunter understands rules, hunt boundaries and how to distinguish male bears from females. At any given time, roughly half the female bears will be with cubs or juvenile bears, none of which are legal to take under the rules of the hunt. That means about 75% of the unaccompanied adult bears are male, and the identification training provided by the department will help the hunter avoid harvesting a female bear.

The Greater Yellowstone Ecosystem grizzly bear population has met federal recovery criteria since the early 2000s. State and federal agencies finalized a long-term conservation strategy in 2007, and the Yellowstone grizzlies were removed from federal protection that year. In 2010, the Ninth Circuit Court of Appeals reviewed legal challenges to delisting, finding that regulatory mechanisms were adequate to support the recovered Yellowstone population. But the court ordered the bears to go back on Endangered Species list until the Fish and Wildlife Service analyzed if a decline in whitebark pine threatened the bear population’s recovery. Grizzly bears were delisted again in July of 2017, and Idaho Fish and Game proposed its grizzly hunting season in March of 2018. The proposal garnered more than 900 comments to Idaho Fish and Game’s website during the public comment period in April and early May. Comments greatly varied, but the majority favored moving forward with a grizzly hunt.

The state of Idaho and its professional wildlife managers played a key part in this population’s recovery, in partnership with other states, and federal, tribal and local governments. In 2017 the U.S. Fish and Wildlife Service took the population off of the Endangered Species Act list, and Idaho will continue to responsibly manage the population in coordination with Wyoming and Montana now that federal protections are lifted.

With only one tag, luck will need to be on your side. But you can't draw unless you apply!

On May 23, the Wyoming Game and Fish Commission unanimously approved a grizzly bear hunt for this fall. It will be the first grizzly bear hunt in Wyoming since 1974. Tag fees if successful are $600 for residents and $6,000 for nonresidents. The official Wyoming grizzly bear regulations can be found here. 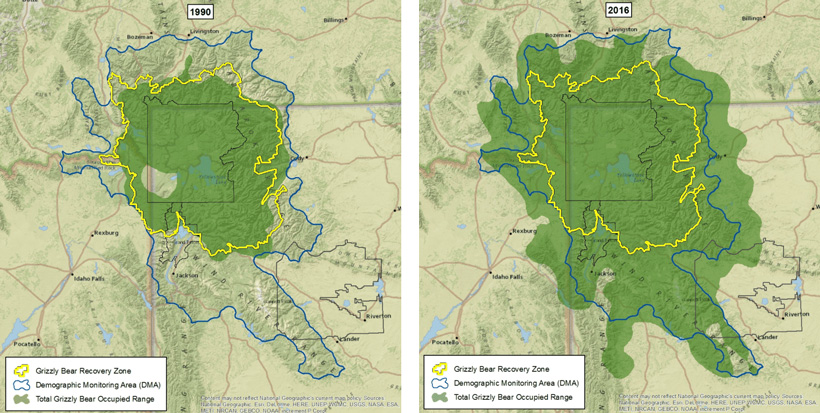 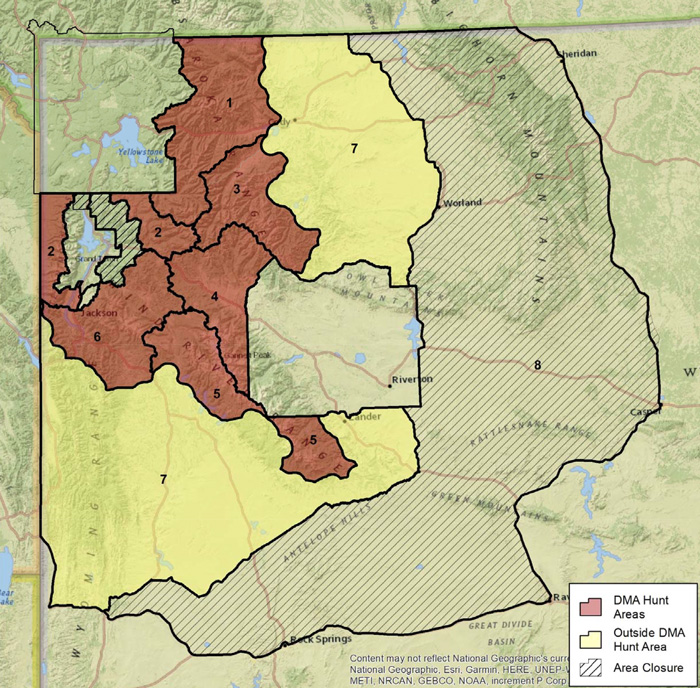 This draw is based on a computerized random drawing list where they will contact people based on the order of their ranking on the list. Wyoming will generate grizzly bear license issuance lists for hunt areas 1, 2, 3, 4, 5 and 6. Separate license issuance lists will be generated based on the residency of applicants for a grizzly bear license. So there will be a resident issuance list and a nonresident issuance list. A computer random number selection will be used to determine name placement on the grizzly bear license issuance lists. When a hunting opportunity exists for hunt areas 1, 2, 3, 4, 5 or 6, licenses will be issued to individuals on the license issuance lists for a specified 10 day hunting period as designated and at the direction of the Department. WFGD will issue at least 75% of the available licenses to residents prior to issuing a nonresident license. For this issuance list, the first three tags will be pulled from the resident list and then the fourth tag will come out of the nonresident list, so under this issuance list grizzly bear draw, two nonresidents could potentially get a tag. Licenses will be issued until mortality limits are reached or until the close of the season. In hunt areas 1, 2, 3, 4, 5 and 6 the total number of licensed hunters in the field will not exceed the available collective female mortality limit. (So only one bear hunter is permitted to hunt at a time.) See notes below table for a detailed description of how the hunt process will work.

The license issuance list has several steps to it:

2. Applicants contacted by the Department who have accepted the possible opportunity to hunt a grizzly bear are required to submit a cashier’s check or money order for their license fee and to show proof of having earned a certificate of competency and safety in the use and handling of firearms, unless exempt by statute or otherwise authorized, to the License Section at the WFGD Headquarters within 10 consecutive days from the date they are contacted.

3. WFGD will also notify applicants who have accepted the possible opportunity to hunt a grizzly bear about the process to receive their grizzly bear hunting license when a hunting opportunity exists.

6. If a licensee harvests a male grizzly bear or fails to harvest a grizzly bear during their specified hunting period in hunt areas 1, 2, 3, 4, 5 or 6, the next individual on the grizzly bear license issuance list may be contacted in accordance with this section.

Nonresident license issuance will only be permitted in hunt areas 1, 2, 3, 4, 5 or 6 when 25% of the total annual mortality limit equals or exceeds one license.

The second draw type for Wyoming grizzly bears is the Limited Quota Draw in Area 7. This is a random drawing. Unlike the license issuance draw, these hunts don't have mortality limits and you can take any grizzly bear.


* At least 75% of the available licenses will go to residents prior to issuing a nonresident license. So nonresidents have chances at three tags in the limited quota draw and residents will have nine tags.
** Currently, grizzly bears do not occupy hunt area 8. Unused licenses for hunt area 7 may be available for use in hunt area 8 upon Department notification and written authorization should grizzly bears occupy this hunt area.

It is the hunter’s responsibility to confirm the grizzly bear hunt area the person intends to hunt is open. The status of grizzly bear mortality limits and hunt area closures will be available 24 hours a day by calling toll free 1-800-264-1280.

There are currently five Boone & Crockett entries for grizzly bears in Wyoming. The largest grizzly bear skull measured 25 10/16" and was picked up in 1961.

Luck definitely needs to be on your side. Once you pull a tag, the secret sauce here for success will most likely be hunting with an outfitter. You can see a list of registered Wyoming outfitters here.