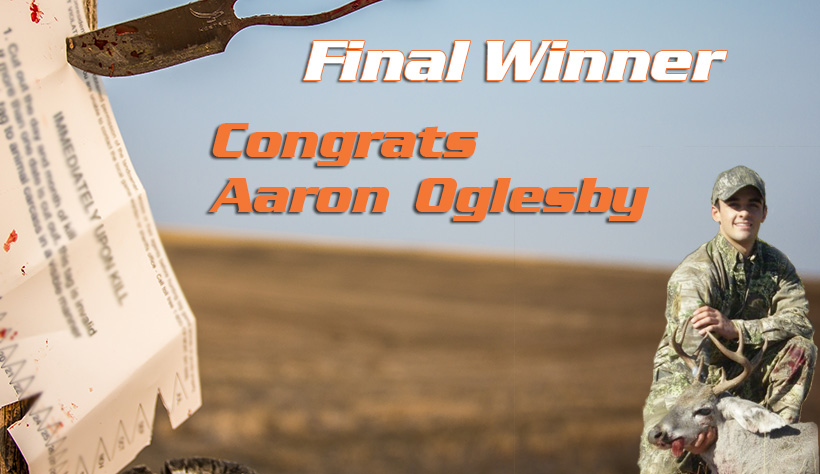 Last week we did our final drawing for the 4 Weeks 4 Tags giveaway, and congratulations to Aaron Oglesby who won the last tag. He will be hunting mule deer in Colorado Unit 69/84 during the third rifle season (November 1-9).

We asked Aaron a few questions about his plans for the hunt:

GH: You're out scouting right now, yes? What are you after?
AO: I was scouting the area that my fiancé is going to be hunting. Up until yesterday, when I found out that I had won the hunt from you guys, that hunt was going to be mine. Thanks to goHUNT, we will now both be hunting.

GH: How will you prepare for this particular hunt?
AO: To prepare for this hunt, I am going to be scouting extensively. You can't expect to get a trophy deer without putting in the time and miles on your boots.

GH: Did you have any other hunts planned for this season?
AO: I had originally planned to fly back to NM for a muzzleloader deer hunt, but after I discovered goHUNT's landowner vouchers that were for sale, it was actually cheaper to buy the voucher than to fly to NM and back, plus everything else. So, I bought a landowner voucher for 49/57/58/581, since it was close to Leadville (where I live). After winning the voucher from you guys, I was able to give that to Leah, my fiancé. But for now, the only planned hunts are both mine and Leah's.

GH: You just move to Colorado from New Mexico, right? How did that change your approach, your season, your overall experience?
AO: Having moved to Colorado has been a major change in all aspects of hunting. In New Mexico, my grandfather taught me how to hunt and where to hunt. Having 60+ years of experience when it comes to knowing where to hunt in different units in southwest New Mexico was a huge asset to me. Here in Colorado, I'm starting to hunt blind when it comes to areas to hunt. This means that it is going to take much more research and scouting if I want success here. Another big change is the weather. In southwest NM, we don't get enough snow to where it affects the animal's movement patterns. Colorado is a completely different story, especially when I live in a town that is at 10,152 ft in elevation. Desert vs. High Rockies is a major change. But there are positives; the trophy quality in Colorado far exceeds southwest NM. Just learning how to hunt them is the hard part.

GH: Your fiancé enjoys hunting, too -- that's awesome! Did you introduce her to it, or was it something she already did before you met? How often do you hunt together?
AO: When we were first together, I had asked Leah if she would ever want to go hunting, and she said, "I think I would like to go, but I don't want to shoot anything.” About 5 months after me and Leah first got together, I was going to go turkey hunting in the Gila; I asked her if she wanted to go, and she said, "Sure, I'll go.” The day before I was going to go hunting she asked "Do you think I can get a turkey tag so I'm not sitting there just being bored?" She bought a turkey tag, and we were both successful on the hunt. After that, she asked me to put her into the draw for deer and elk the next year, and she drew out on both. She was able to harvest a cow elk that year with an offhand double lung shot from 127 yards the first time she ever even shot at a big game animal.

Thanks to everyone for registering to enter the giveaway, and best of luck to all of the winners who will be using their tags this fall and hopefully bringing home some great animals.