What is carrying capacity?

Each piece of land has a specific carrying capacity; this is the number of animals that the land can sustain without damage to either the habitat or the animals. As in this illustration, imagine the carrying capacity as a lake. The annual reproduction of wildlife (the rain) continuously replenishes the habitat. However, the habitat can only hold so much wildlife. The runoff from the dam indicates the different factors that will affect the wildlife population in a habitat. These animals are known as the harvestable surplus. They are the animals that would expire due to other factors (ranging from accidents to predators), and thus can be harvested by hunters without damaging the population. 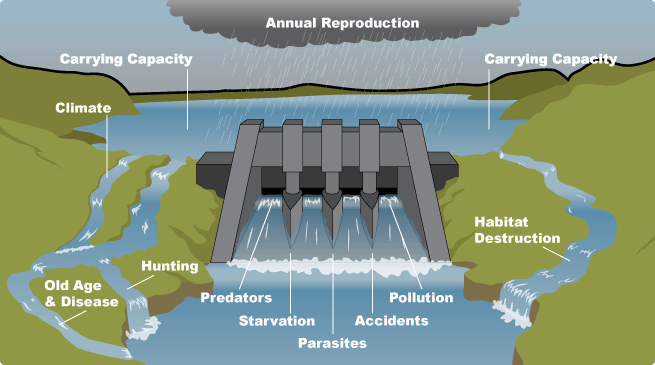 The quality and number of wildlife on any given piece of land is affected by the following factors (also known as limiting factors):

Climate
Climate factors range from drought conditions that dry up watering holes to snow and ice that cover food sources. Too much rain can also damage nesting sites.

Predators
Predators prey on the very young, old and sick animals for food.

Starvation
Starvation usually occurs when there are too many animals and not enough food in an area.

Hunting
Hunting removes the overpopulation of wildlife in a given area.

Accidents
Loss of habitat to development increases the occurrence of wildlife being hit by vehicles as well as other accidents caused by human-created additions to the environment (power lines, damns, etc.).