Jon Gabrio was born and raised in the rainforest of the Pacific Northwest. He obtained a love for hunting at an early age riding around with his dad at the age of four. Passing his hunters safety course at age nine and harvesting his first deer at 10 years old, he’s been hooked ever since. Jon turned his passion for hunting in to his full time career as the owner of Apex Advertising; Jon is a full-time outdoor web designer and graphic artist and has done work for countless hunting and outdoor companies in the industry. Some notable clients of his are Cameron Hanes, Elk101, Phelps Game Calls, Kifaru, and the list goes on. Jon is also part of a great team of guys that have formed Angry Mountain Productions filming and photographing their hunting adventures. Jon represents Blade-Tech Industries, Kifaru, First Lite, Mtn Ops, Phelps Game Calls, onXmaps and Savora Broadheads. 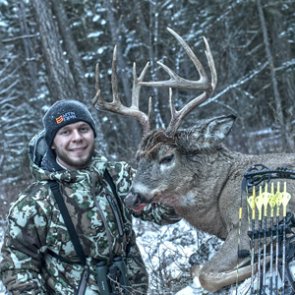